What is a geyser in geology ? 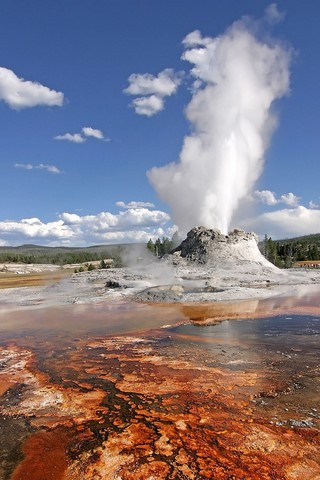 A geyser is a hot spring from volcanic fields erupting in plumes at regular intervals when at depth the water vapor pressure exceeds a certain threshold and causes a vapor explosion.
Compared to a hot spring, a geyser requires a narrowing in the hot water inlet pipes.
The eruption mechanism is as follows : underground water heated by magma rises and enters the geyser's piping system. This piping is made up of a set of cracks (partially sealed by geyserite deposits) that feed larger conduits with tightenings : that of Old Faithful, in Yellowstone, is no more than 15 cm wide. The ascent of hot water towards the surface is thwarted by the enormous weight of the overlying cold water column : its pressure gradually increases until it forms super-critical water, brought to temperatures well above boiling point. At the bottom of the column, the very high pressure inhibits the formation of vapor bubbles which only appear at a shallower depth, when pressure and temperature no longer compensate for each other. The vapor bubbles then quickly become too numerous to rise through the water in the constricted part of the system and push the water column out of the geyser. It is the first overflow of (cold) water that precedes the eruption of the geyser.
This overflow lowers the pressure in the entire water column and causes a sudden depresurization of the superheated water which expands in the form of a steam explosion, with a volume of steam equal to about 1700 times the volume of water. This sudden expansion expels the water violently : it is the eruption of the geyser, which stops when the reservoir is empty or when the pressure has sufficiently dropped.
In Yellowstone, we can distinguish cone geysers (main photo), with a maximum deposit of geyserite near the orifice, and fountain geysers, surrounded by a puddle of geyserite. The deposit of geyserite takes place during the eruption in the first type, and during the overflow preceding the eruption in the second type.
Back to summary