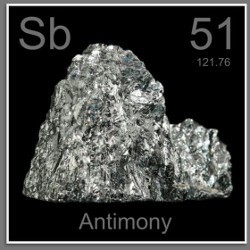 Antimony is a brittle metalloid (or semi-metal), silver in color, close to arsenic. In nature it is found in the form of sulfides and sulfosalts, the most common being stibnite. Stibnite is currently the main ore, but in the past we have exploited bertherite and lead sulfosalts and antimony, of lower quality.
Times are tough for antimony. It was for a long time an alloy metal : associated with lead, it was used in the composition of printing characters as well as in bearing metals (up to 15%) which it made harder. But after having disappeared in the 80's from this traditional job, it withdrew irreparably from the automobile industry, replaced by calcium in the new generation of batteries ; these uses, in which antimony acts as a hardener for lead, now account for only 30% of consumption.
Antimony benefits, however, from the tightening of regulations on the fire resistance of materials. Fireproofing currently provides the main outlet for antimony oxides (50% of consumption) : the addition of antimony oxides to textiles, plastics and rubbers in fact endow them with highly appreciated flame retardant qualities. Antimony trioxide is used as a pigment, in the manufacture of glasses and in pyrotechnics.
Antimony also maintains itself well in the form of various chemical compounds in some of its classic uses : pigments and opacifiers for ceramics, paints and glassware (20% of consumption).
Antimony producing countries are barely a dozen to supply the 140,000 tonnes of antimony metal produced each year. The world market is crushed by Chinese production (120,000 tonnes), followed by Bolivia (6,330 tonnes), Russia (4,900 tonnes) and South Africa (3,415 tonnes).
France has not produced antimony since the 1980's. The extraction of stibnite is declining, however, as antimony is increasingly recovered as a by-product from the processing of lead ores, often rich in antimony sulfides. Antimony nevertheless had a glorious past in mining France at the start of the 20th century. The great Lucette vein (Mayenne), which produced 40,000 tonnes of antimony until its closure in 1939, the important Vendean vein of Rochetrejoux, and the most modest but numerous veins of Auvergne (Ouche, La Bessade, Le Fraisse, Ally... from which 40,000 tonnes of antimony were extracted between 1900 and 1932), raised France to the rank of first producer of antimony around 1910, with nearly 25% of the world tonnage. Native gold was discovered at the Lucette in 1903 in quartz associated with stibnite and the mine will produce 8.7 tonnes of gold in addition to antimony.
Annual French consumption is around 10,000 tonnes.
Back to summary