Erythrite (sometimes referred like erythrine) is a rare secondary mineral of the oxidation zones of cobalt-nickel sulphide deposits (skutterutide, cobaltite, etc...), but it is nevertheless the most common of the cobalt arsenates. It has the same crystalline structure as annabergite (nickeliferous) with which it constitutes a continuous series. Erythrite owes its name to the Greek eruthros (red), in reference to its color. It occurs in very aesthetic flat acicular crystals, flattened according to the perfect cleavage {010}, striated vertically, frequently grouped in rosettes or sheaves. The clear shapes, however, are relatively rare and the mineral is mostly known in radiated fibers, or encrustations with a fibrous to earthy structure. Its color, a beautiful purplish pink among large crystals, fades into carmine pink in small ones and then pale pink in incrustations. It is a rare mineral sought after by collectors that has no special use and whose low hardness (1 to 2 on the Mohs scale) prohibits any use in ornament or jewelery.

Erythrite in the World

The Moroccan cobalt mines of Bou-Azzer (Irhtem, Arhbar, etc...) produced exceptional tabular crystals up to 3 cm (photo on the right) but 15 cm specimens are reported, as well as some beautiful rosettes of centimetric crystals. Before Bou-Azzer the most beautiful specimens known were the sheaves of acicular crystals of the Schneeberg mines in the German Erzgebirge (5 mm). Fine millimeter rosettes are reported at Ojuela Mine in Mapimi (Durango, Mexico) and good centimetric crystals at Cobalt (Ontario, Canada). 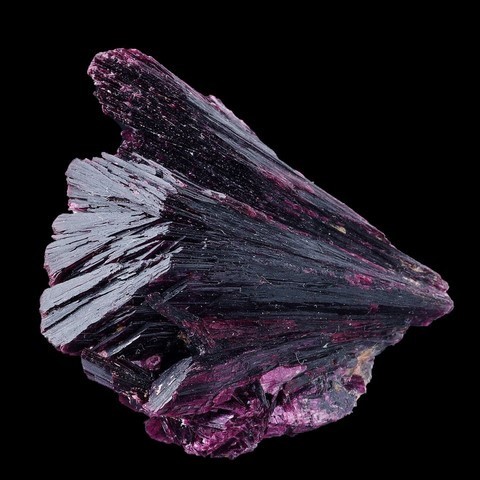 Erythrite is known in France in rare millimetric crystals at the Treille Mine near Ste-Marie-aux-Mines (Haut-Rhin) and at the Chalanches mine in Isère the type-locality where it occurs in encrustations. It is also found at the St-Daniel mine near Giromagny, Territoire-de-Belfort (photo on the right © Thierry Brunsperger - Mindat) and Beyrède-Jumet (Hautes-Pyrénées) in millimetric rosettes.

No twinning known for the species but possible.

No fakes reported for this mineral species.