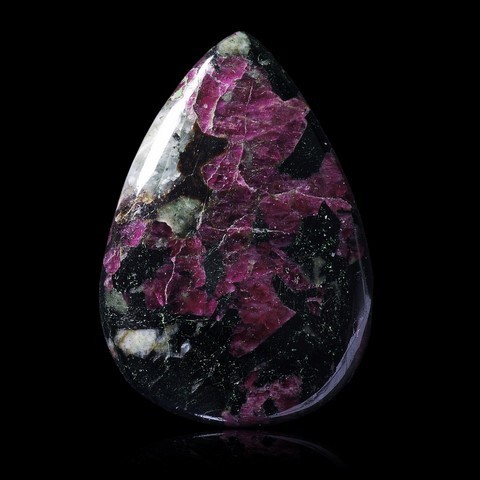 Eudialyte is an exclusive mineral of nepheline syenites and associated pegmatites. It owes its name to the Greek eu (good) and diallusis (dissolution), because it is very easily attacked by acids. It occurs in frequently flattened crystals or very modified rhombohedra with pseudo-octahedral habit, sometimes prismatic but the developed crystals are rare ; it is also massive or in unformed grains. Its color evolves from the wine-lee to a beautiful purple (eucolite variety a little richer in iron), passing through red tones that recall the pyrope ; more rarely it is yellow-orange to brown. Eudialyte is very sensitive to weathering and easily destroys on outcrops. It is a rare mineral sought after by mineral collectors who is also much used in jewelry (cut in cabochons).

Eudialyte in the World

The most beautiful samples come from the alkaline complex of Ilimaussaq (Greenland), where well-formed crystals commonly measure 1.5 to 4 cm and exceptionally 10 cm. The nepheline syenites of Lovozero and Khibiny (Kola Peninsula, Russia) also yield superb crystals measuring between 1 cm and 10 cm of red-violet to pale-pink eucolite, as well as masses (photo on the right). In Madagascar, eudyalite is massive in the Antevenanakombry deposit. The nepheline syenites of the Norwegian islands of Langesundsfjord give centimeter red-violet to pale pink crystals. In the islands of Los (Guinea), eudyalite forms orange-red crystals associated with aegyrine, a color found in the small gemmy ones of Mont-St-Hilaire (Canada). 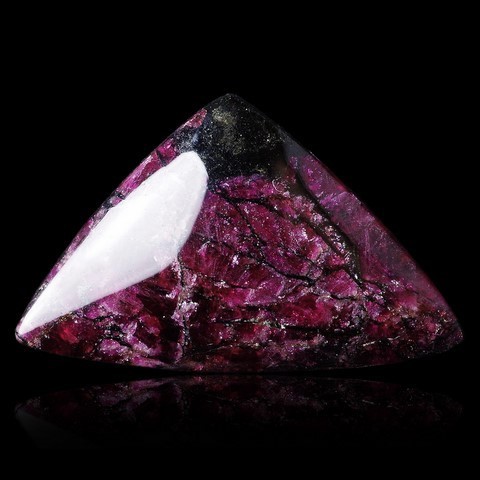 In France, eudyalite is known in millimetric crystals in the nepheline syenite of Fitou in Aude department.

No twinning known for the species.

No fakes reported for this mineral species.