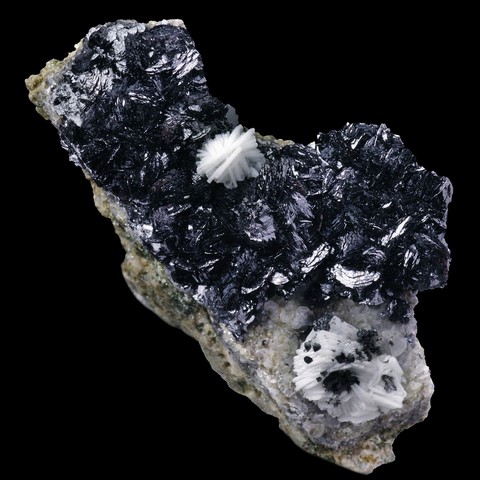 Groutite is an oxide of manganese that is part of the diaspore group. It is the trimorph of manganite and feitknechtite. It forms in altered BIFs, in manganese deposits that have undergone metamorphism, and in hydrothermal environments. It was named in honor of Frank Fitch Grout, a petrologist from the University of Minnesota (USA). It is in the form of shiny black crystals grouped in barrels or rosettes, botryoidal masses, needles or millimetric prisms. It is an accessory manganese ore.

The most beautiful specimens are centimetric rosettes from Zavalye graphite field (Ukraine) and from South African manganese deposits (Hotazel and N'Chwaning Mines). Decimetric botryoidal masses are from Mahnomen pit, Minnesota, the type locality.

Twins are reported, but not studied.

No fake recorded for this mineral species. Can sometimes be confused with the manganite with which it shares its deposits.