What is a bauxite in geology ? 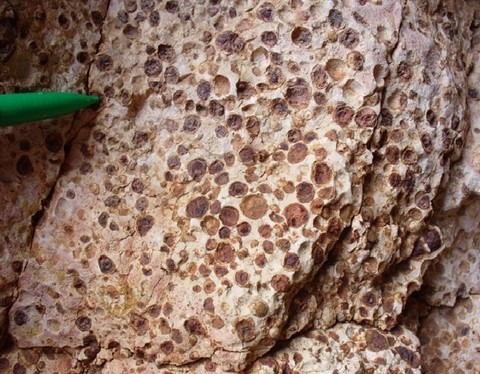 Bauxite is a sedimentary or residual rock composed of a mixture of aluminium hydrates (diaspore, gibbsite and boehmite), clays (kaolinite), and different iron oxides and hydroxides which gives it its reddish hue. It commonly shows a pisolitic structure, with pisolites with red concentric zones, assembled in a clear, pink or red cement.
Bauxites result from a surface alteration of rocks in a tropical climate called lateritic alteration. A distinction is usually made between native bauxites, formed on site, and non-native bauxites, whose hydroxides have been moved from their original site of formation.
Bauxites constitute by far the main aluminum ore (85% of bauxites are transformed into aluminum), but can also constitute a raw material in the refractory industry (15% of their use). Bauxite, however, can only become an aluminum ore if it contains more than 40% Al2O3. Below these contents, it passes in continuity with the laterite when the iron oxides become predominant. The main deposits of bauxite are Brazil and Jamaica. Its name comes from the village of Baux-de-Provence (France), the site where it was discovered in 1822, and the cradle of the world aluminum industry.
Back to summary