Inesite is a rare pyroxenoid found in metamorphic manganese deposits. Its name comes from the ancient Greek "ines" (meat fibers) because of its color and appearance. It is generally found in lamellar crystals that form fibrous spherules and rarely in prismatic or acicular crystals. Color usually varies from pink to red. Exposed to light, it turns brown due to the emergence of a manganese oxide film. It is a mineral that is not used in any specific industry, specimens are intended only to the mineral collection. However, it should be noted that there are inesite cabochons, potentially this mineral can be cut and used in jewelery, but has no real interest. 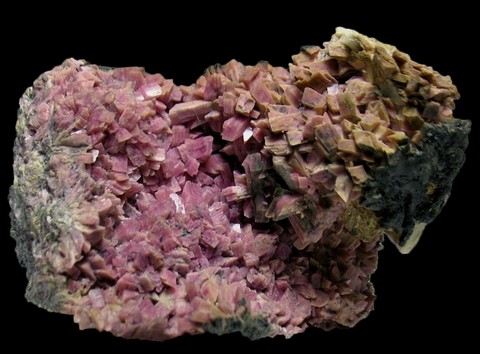 The most wanted crystals forms red spherical aggregates of 2 cm and came from the mines of Kuruman in South Africa (Wessel and N'Chwaning). We can also note the Australian mines of Broken Hill which provided centimetric crystals associated with apophyllite and aggregates of more than 6 cm ! Less known, it should be noted Sweden mines were extracted fibrous specimens whose crystals can exceed 10 cm. Inesite is also known in Japan (Shimoda, Innai) and Germany (Nanzenbach the type locality). The most beautiful prismatic crystals came from Hall Creek, California (photo in margin).

Inesite does not occur in France.

Inesite has no twinned crystals known.