What is the metamorphism in geology ? 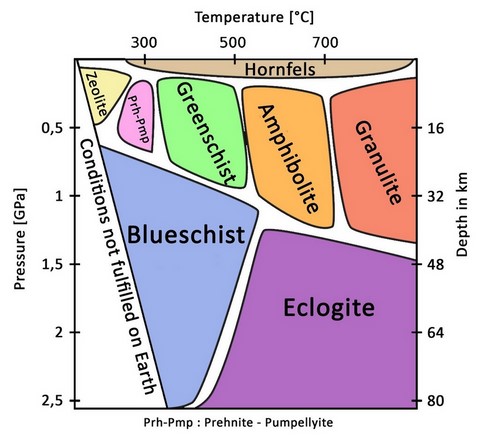 Metamorphism is the transformation of a rock in the solid state, without modification of its overall chemical composition, under the influence of a rise in temperature and/or pressure. These new conditions induce the crystallization of new minerals, called "metamorphic", and give the rocks particular structures with clear foliation, characteristic of metamorphic rocks. Metamorphism is one of the most important phenomena in geology.
We usually distinguish :

It is caused by pressure and temperature rises and affects considerable volumes several kilometers thick over very large areas, commonly exceeding several hundred kilometers. We can distinguish the metamorphism which appears at the base of the powerful sedimentary series (so-called burial or static metamorphism) and dynamothermic metamorphism linked to large orogenic phases and responsible for the formation of mountains (Hercynian, Alpine metamorphism, etc...).
Metamorphism has different degrees of intensity, assessed according to the nature of the minerals that appear. The following mineralogical facies are thus defined by increasing intensity : facies of zeolites, green schists, amphibolites and granulites.
The terrains of regional metamorphism are divided into zones of increasing intensities (anchizone, epizone, mesozone, catazone and ultrazone), separated by metamorphic isogrades, generally named after the name of the mineral which appears at a given metamorphism intensity.
The rocks of regional metamorphism are very numerous and depend on the nature of the initial rock and the intensity of the metamorphism. The most common are schists, mica schists, gneisses, granulites, quartzites (in part), amphibolites, pyroxenites, marbles, etc...

It develops with a graduated intensity around the magmatic intrusions over a few meters to a few hundred meters from the limits of the latter, drawing a halo of contact metamorphism. This metamorphism is caused mainly by a rise in temperature due to the arrival of magma, hence the name, also, of thermal metamorphism or thermometamorphism.
The rocks present in the contact metamorphism halos depend to a large extent on the initial material and can therefore be of various types. In the case of an initial rock (protolith) silico-aluminous (clays, schists...), the rocks grouped under the name of speckled schists and hornfels, will develop andalusite and cordierite ; in the case of an initial carbonate rock, the rocks formed will be essentially marbles. Skarns are a special case of hornfels developed at the expense of carbonate rocks ; often rich in metallic elements (Cu, W, Au, etc...), they can constitute deposits of these metals.
Thermal metamorphism also appears over a few centimeters at the base of lava flows or at the edges of veins of magmatic rocks.

It is linked to the mechanical stresses that develop in brittle accidents. Under these conditions, the rocks are crushed or acquire a schistosity : we thus obtain mylonites and cataclasites. However, the use of the term “metamorphic” requires that these phenomena be accompanied by a rise in temperature and mineral neoformation, which is not always the case.

It is exceptional and very localized at the point of impact of large meteorites.

In certain cases (contact metamorphism and action of hydrothermal fluids), the transformation is accompanied by limited chemical inputs : this is called allochemical or metasomatic metamorphism.
Back to summary