What is an inosilicate in mineralogy ?

Inosilicates are silicates whose basic structure is made up of chains or ribbons of [SiO4]4- tetrahedra linked by two neighboring vertices. It is an important subclass composed of more than 200 minerals among which the two major groups of pyroxenes and amphiboles.
In the case of chains (pyroxenes), the tetrahedra are linked by two neighboring vertices. The formula of the group is then written [SiO3]2-, [Si2O6]4- or [Si3O9]6-.
The ribbons are made up of two simple chains joined together by the pooling of oxygen ions. The formula of the group is then [Si4O11]6- (amphibole group). 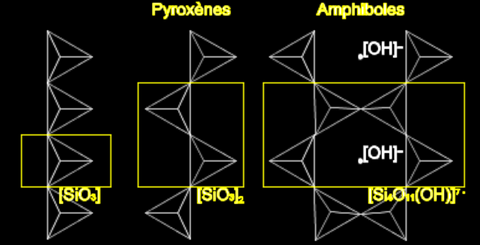