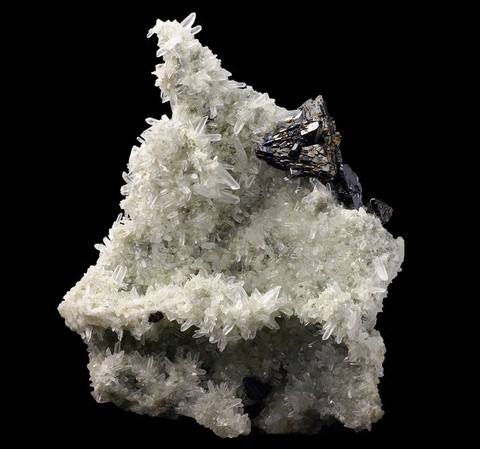 Tetrahedrite (formerly called panabase) is the most common representative of the tetrahedrite group. It is common in the majority of hydrothermal deposits (polymetallic and gold-bearing veins, sulfidic masses, sedimentary deposits, etc...) where its easy alteration to blue and green carbonates (azurite and malachite) makes it easily detectable. It forms 2 series (continuous solid solutions) with tennantite, the arsenic pole, and freibergite, the silver pole. The replacement of silver by copper is very common : the silver contents commonly reach several percent, passing to the domain of freibergite when the silver atoms predominate over those of copper. The tetrahedrite-freibergite association is the main silver reservoir on the planet, far ahead of silver sulphides, which are richer in silver but less abundant. It owes its name to the most common form of its crystals : tetrahedra. They have a metallic luster and a gray to black color, with a subconchoidal break. As mentioned earlier, tetrahedrite is both a silver and copper ore and its crystals are sought after by mineral collectors. 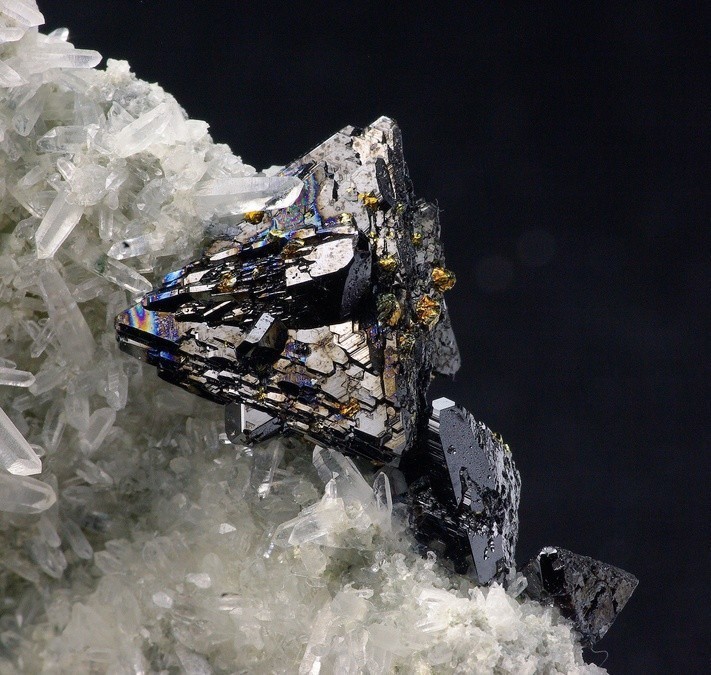 Tetrahedrite on quartz from Cavnic, Romania 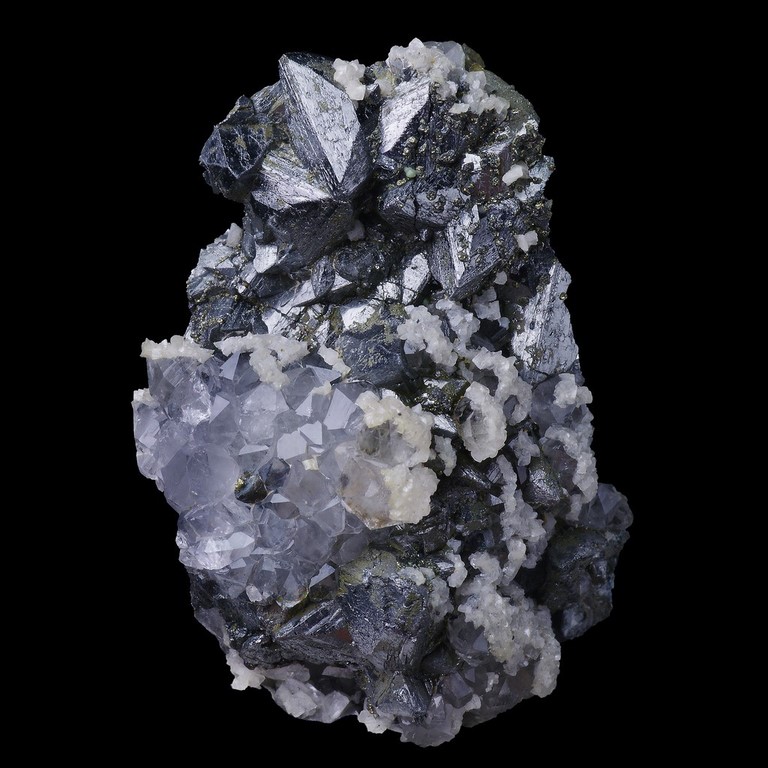 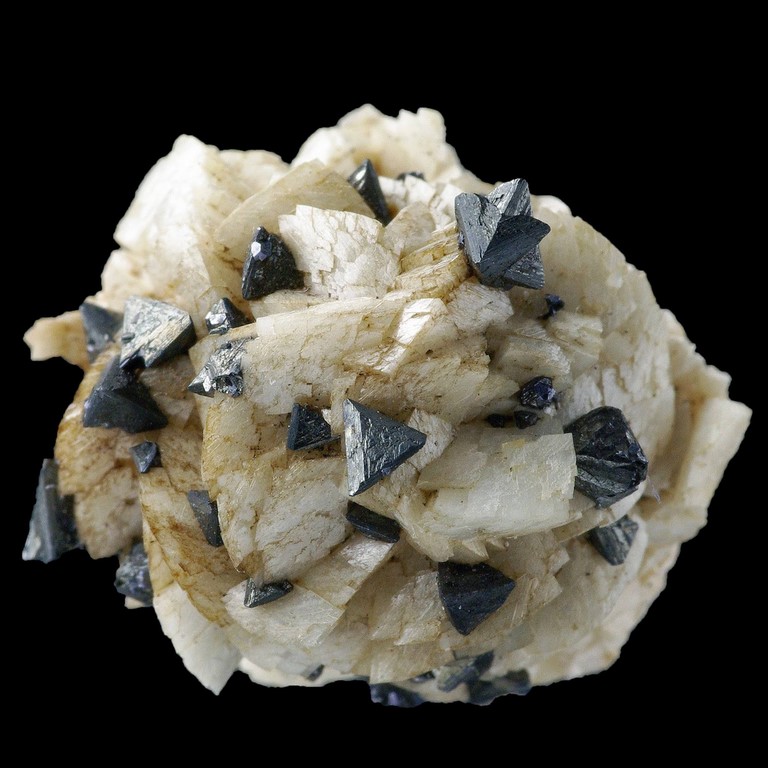 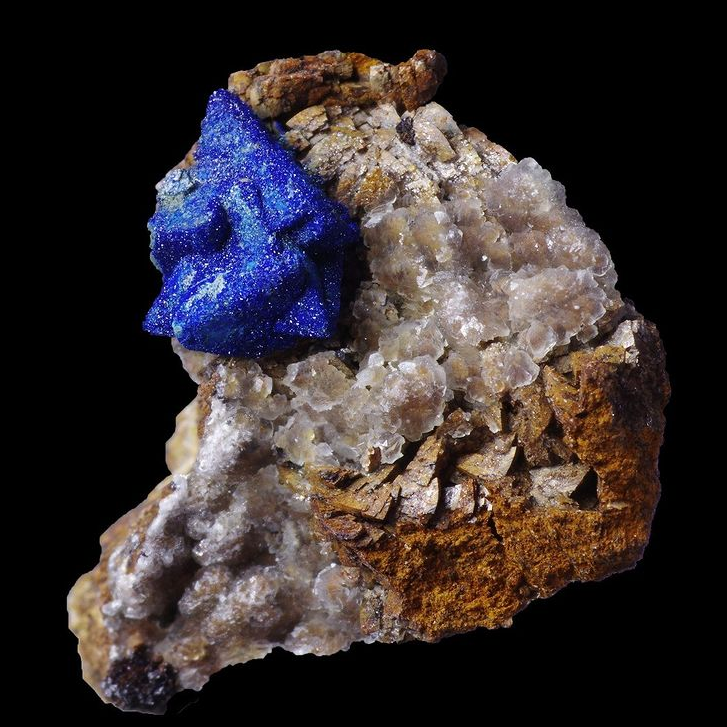 Tetrahedrite in the World

The Cavnic mine in Romania produced very beautiful tetrahedra (main photo) sometimes over 4 cm in size as well as the Freiberg mines in Germany or the Machacamarca mine (Bolivia). In Concepción del Oro (Mexico) the tetrahedra can exceed 3 cm. Large crystals have also been extracted from the mines of Huallanca (Peru) up to 7 cm.

The most remarkable crystals, tetrahedra measuring up to 25 cm for a 15 cm edge, were extracted in the 19th century from the small French mine in Irazein, in Ariège. The lead veins of Pranal in Pontgibaud (Puy-de-Dôme) and La Mure (Isère) also provided good crystals reaching respectively 7 cm and 5 cm. There are also good tetrahedrite crystals of good sizes in Allevard (Isère) with a record of 5.3 cm. The Alzen mine (Ariège) provided fine groups of centimetric crystals. Millimetric crystals are found in Malines (Gard), as well as on dolomites from the Usclas-du-Bosc quarry (Hérault) where the crystals are frequently twinned.

Twinning is rather infrequent but present on {111}.

By alteration, azurite and / or malachite can pseudomorph tetrahedrite.

TP : Opaque
IR : -
Biréfringence : None
Optical character : None
Pleochroism : None
Fluorescence : None