The 7 chakras and their meanings 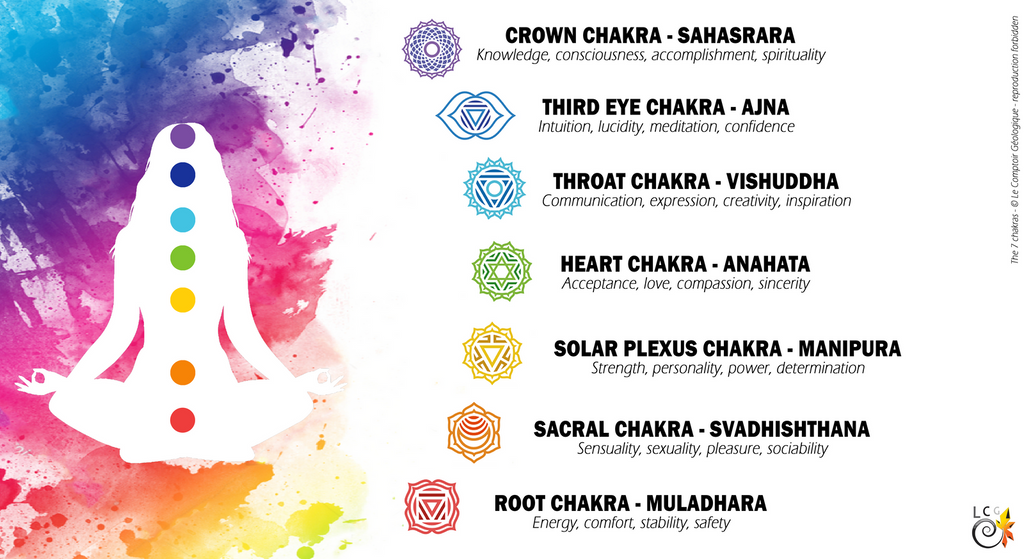 Definition and origin
The term "chakra" comes from Sanskrit and traditionally refers to disc-shaped objects, including the sun. The term is today better known to designate "spiritual centers" or "junction points of energy channels" resulting from a conception of yoga and which could be located in the human body. According to this conception, there would be seven main chakras and thousands of secondary chakras.
The seven main chakras are described as forming a luminous column (column of silver) from the base of the spine to the head. Each chakra is associated with a certain color, a pair of deities, a classical element, sounds, an organ of action, a sensory organ, functions of consciousness, etc...
The oldest known mention of the chakras is in the Brahma Upanisad and the Yogatattva Upanisad written between 1500 and 500 BC. J.-C.

Traditional Chinese medicine is based on a similar model where the human body is defined as an "energy system" crossed by vessels and points, those used by acupuncture. However, no physical or physiological evidence has yet come to support this model for which each chakra corresponds to the functions of the various organs corresponding to it :
- The first chakra (Muladhara) or "root chakra": located between the anus and the scrotum. It is linked to the metabolism, the lymphatic system, the bladder and the adrenal glands.
- The second chakra (Svadhishthana) or "sacral chakra": it is linked to the kidneys, the reproductive system, the intestines and the immune system. It regulates the activity of the ovaries and testicles (gonads).
- The third chakra (Manipura) or "solar plexus chakra": it is connected to the pancreas. It would have an action on the liver and the gallbladder as well as on the digestive system (stomach).
- The fourth chakra (Anahata) or "heart chakra": it is linked to the heart, the circulatory system, the lungs and the thymus. The link with the thymus is considered important with children because this gland atrophies rapidly with age, its function is the production of lymphocytes in early life.
- The fifth chakra (Vishuddha) or "throat chakra": it is the center of the respiratory system, in connection with the functioning of the thyroid gland. It is considered important for the functioning of the neck, voice and hands.
- The sixth chakra (Ajna) or "third eye chakra": it is linked to the pituitary gland, and supports the function of the eyes and the nervous system, it is the seat of intuition.
- The seventh chakra (Sahasrara) or "crown chakra": it is linked to the pineal gland (epiphysis). Its action concerns the activity of the cerebral cortex, it has an important action on the circulation of energy in the body and on intellectual activities, concentration and memory. It harmonizes the yang energy of the body.

Westernization of the myth

In the 1960's these philosophical beliefs, first derived from Hinduism, were largely taken up by the New Age movement. Considered as an attempt to "re-enchant the world" in the face of the crisis of ideologies and the refusal of industrial growth and consumerism, the New Age is part of the global phenomenon of new religious movements, while being based on previous doctrinal elements. This return to spirituality is characterized by a deepening of religious feeling or even by the feeling of an inner quest, outside of any historically constituted structure.

These New Age currents present in certain ecological circles have developed Gaia theories. Theories according to which living beings have an influence on the entire planet on which they are found. The ecosphere has developed self-regulation (undisputed point even outside of the Gaia hypothesis) and the existence of each living being is then supposed to be regulated for the benefit of the entire ecosphere (properly Gaia hypothesis). This self-regulating system made up of all living beings (biomass) and non-living things (rocks and minerals) has internal mechanisms that can cause it to be considered as a living being in its own right. This one is named by convention Gaia by allusion to the Greek mother goddess.

From Gaia theories was naturally born lithotherapy : an unconventional medical practice based on the belief in the power that certain crystals or certain rocks would have in contact with or near human beings. According to this credo, the crystals would emit a singular "energy" which would have the power to improve the physical condition or the psychic well-being of a person. There is no scientific proof of the effectiveness of this practice or of the very existence of a mineral-specific energy. Lithotherapy is therefore considered a pseudoscience for which scientific studies show no effect greater than the placebo effect.

Believe or not to believe ?

"God is, or he is not. But which side will we lean on ? Reason can determine nothing : there is an infinite chaos which separates us. A game is being played, at the end of this infinite distance, where there will come heads or tails. What will you wager? For reason, you cannot do either one or the other ; for reason, you cannot undo either of the two. So do not blame those who have made a choice, because you know nothing about it.
- Nope ; but I will blame them for having made, not this choice, but a choice ; for, although the one who takes the heads and the other are in the same fault, they are both in fault : the right thing is not to bet.
- Yes, but you have to bet ; this is not voluntary, you are on board. So which one will you take? Let's see. Since you have to choose, let's see what interests you the least. (...). Your reason is not hurt any more by choosing one than the other, since it is necessary to choose. This is an empty point. But your bliss ? Weigh the gain and loss, taking the heads that God is. Let us estimate these two cases : if you win, you win everything ; if you lose, you lose nothing. Bet therefore that he is, without hesitation."
Blaise Pascal - Thoughts, fragment 397