Torbernite is a relatively common secondary mineral in the superficial oxidation zones of uranium deposits ; it is present but much rarer in uranium pegmatites. It belongs to the group of autunite which it differs by the presence of copper instead of calcium. Copper is also the origin of its green color. This chemical difference explains that torbernite does not fluoresce under ultraviolet light, unlike many minerals in the autunite group. It owes its name to the Swedish chemist and physicist Torbern Olof Bergmann. The torbernite is in square tablets more or less thick, perfect cleavage on {001}, more rarely in tetragonal octahedra ; it can form mixed crystals with autunite. It is a beautiful emerald green to dark green, transparent when fresh ; but the torbernite dehydrates easily in the air in a less hydrated phase : the metatorbernite, a phenomenon which results in the opacification of the crystals as well as by the exfoliation of these. Torbernite is an important uranium ore and its crystals are valued by collectors of minerals. 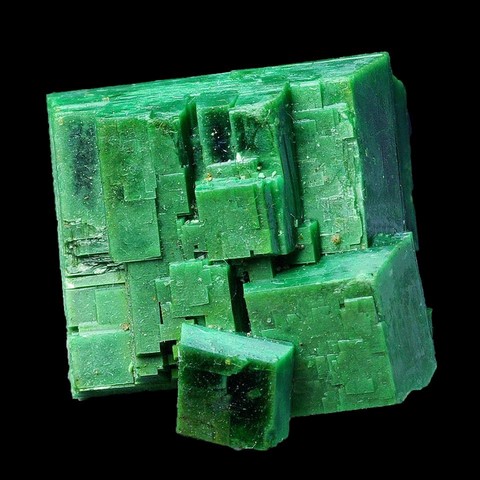 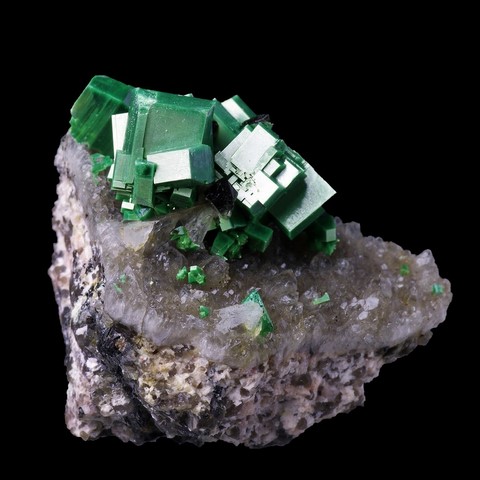 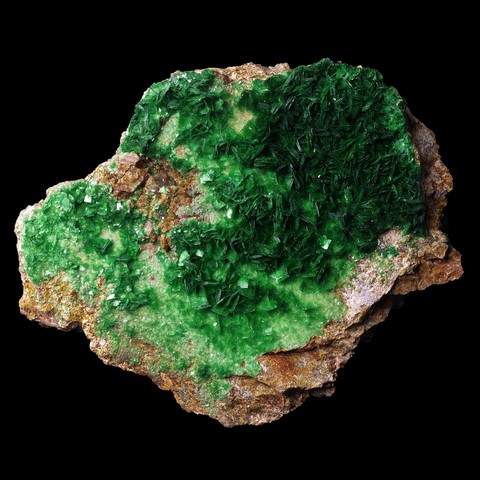 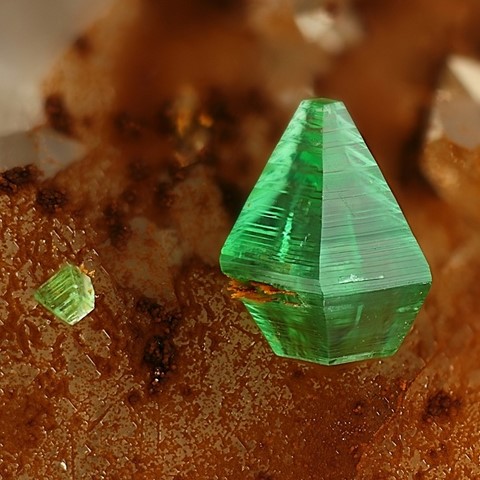 Torbernite in tetragonal octahedron of Clara Mine, Germany
© Michael Förch

The world's best specimens of torbernite come from the Congolese uranium deposits of Katanga (Musonoi and Shinkolobwe). Beautiful, bright brilliant emerald green lamellar crystals up to 3 cm apart formed groups covering surfaces of several square decimeters. Groups of large crystals have also been discovered in the Gunnyslake mine and in many nearby mines (St. Agnes, St. Austell, St. Just, etc.) in Cornwall. Beautiful emerald green tabular crystals up to 2 cm are also from the Erzgebirge uranium mines in German Saxony. 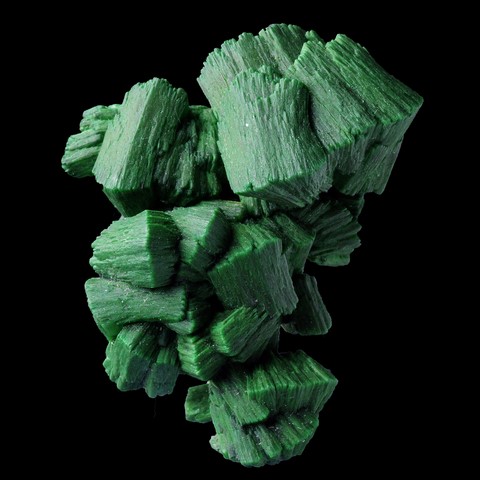 France possesses world-quality specimens thanks to the magnificent emerald green crystals exceeding 2 cm of arete grouped in sheaves or fans extracted from Margabal, Aveyron (main photo and photo on the right).

There are no fake records for this species, however most of the torbernite samples are treated to prevent dehydration and thus ensure good conservation. The old specimens are often varnished, varnish that does not necessarily age very well (yellowing, cracking). Modern treatments are almost invisible, and "plasticizes" the sample. We use paraloid B72 to stabilize our torbernites, it exists in ready-mixed solution to be applied directly with the brush and also in "beads" to dissolve in acetone.