What is asphalt in geology ? 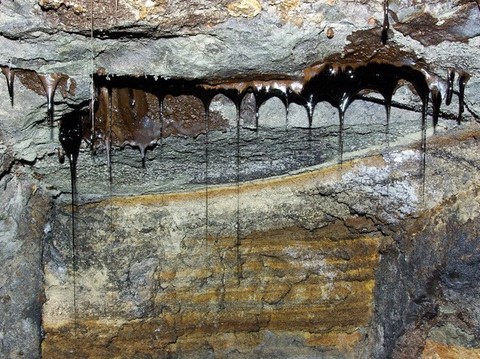 Asphalt (or bitumen) is a very viscous to solid natural product, black in color when fresh, turning brown when weathered. It is derived from the transformation of buried organic matter and is associated with the formation of petroleum. It is mainly found in the impregnation of limestones, sandstones or shales (limestones and bituminous shales) in which it can be exploited.
In France bitumen was extracted around Clermont-Ferrand in the Limagne basin. Three mines have been active for almost a century : the Mine des Rois (last to have closed in 1984), the Champs des Poix mine in Pont-du-Château and the Escourchade mine in Chamalières. It was also once harvested by the Romans at Puy de la Poix (near Clermont-Aulnat airport), a local geological curiosity where the bitumen flows in a stream in a completely natural way mixed with supersalted water (three times the concentration in sea water salt).
Used at the outset as a cough remedy and for caulking boats, we find asphalt today on our roads, it also serves to waterproof roofs.
Back to summary