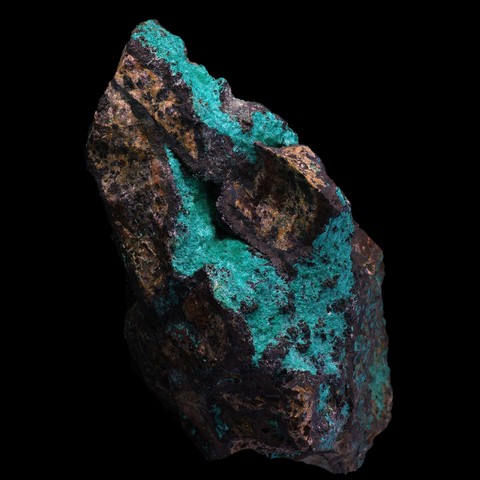 Brochantite is a secondary mineral in copper deposits, formed under weakly acidic conditions, accompanying antlerite, atacamite and many other secondary copper minerals. It owes its name to the French geologist and mineralogist André Jean François Marie Brochant de Villiers (1772-1840), professor at the Paris Ecole des Mines. Brochantite often occurs in small centimetric crystals, flattened or elongated prismatic, often fluted prism faces, and commonly twinned. It can also appear as acicular to fibrous crystals grouped in bushy aggregates, more rarely in compact stalactitic or grainy masses. It is transparent to translucent, with a vitreous luster, a little pearly on the cleavage, its color is emerald green to blackish green, rarely light green, which causes frequent confusion with malachite. Brochantite is sometimes sufficiently abundant to constitute a copper ore (Chuquicamata and Chañarcillo in Chile).

Brochantite in the World 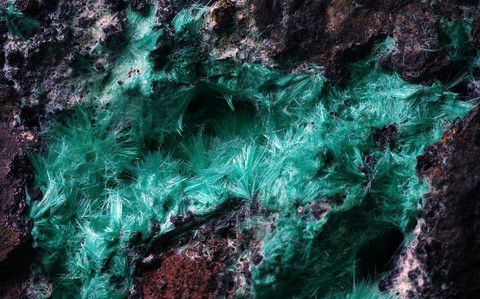 The most beautiful crystallizations of brochantite have been described at Chuquicamata (Chile), at Bisbee and in the neighboring deposits of Arizona (USA) which gave the largest known crystals, as well as at Mindigi (Katanga) which provided abundant magnificent groups of needle-like crystals. Similar acicular crystals, on gypsum matrix, were produced in the Moroccan mine of Bou-Becker.

In France, brochantite is known in Cap Garonne (Var) and Finosa (Corsica), but also in Echassières (Allier), in Crozet (Loire), in Chessy, Longefay and Propières (Rhône), in Asprières (Aveyron), at Mas Dieu (Gard), at Cuzac (Lot), at the Mine du Franciman and Montroc (Tarn) and in many other small localities.

Twinning on {100} is common. Twinned crystals are often symmetrical and pseudo-orthorhombic in appearance.