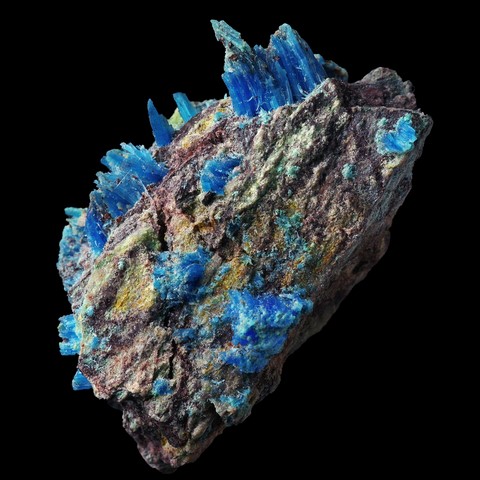 Chalcanthite is a frequent secondary mineral in the oxidation zone of copper deposits, especially in arid zones because it is very soluble. It is associated with other sulphates and secondary copper minerals. It is frequently a mineral of current formation (neoformed), arising in mine galleries from acidic waters which carry copper in solution. Its name comes from the Latin chalcanthum (copper flower), it has been known since Antiquity. Its crystals are rare, generally short prismatic, less commonly tabular ; artificial crystals, very easy to obtain, are often more aesthetic than natural ones. Chalcanthite is much more often massive, concreted or stalactitic, with a fibrous structure. It is characterized by its sky blue to Prussian blue color, a high translucency and, for amateurs because toxic, by a sweetish metallic taste. Some industrial copper recovery processes by dissolution (leaching) artificially form chalcanthite, the copper then being recovered by precipitation on iron. It is a mineral which bleaches by dehydration. Locally, chalcanthite is a significant copper ore.

Chalcanthite in the World

The most spectacular specimens of chalcanthite are mostly stalactites, stalagmites and concretions, which reach metric size in pyrite mines in the Rio Tinto district of Spain. Large masses exploited are also known in the mines of Chile (Chuquicamatan, Chañarcillo). The crystals are much rarer: millimeter specimens are known in Bisbee (Arizona). Also in Arizona, note also the superb fibers exceeding 5 cm composing blooms at the Helvetia mine (main photo).

In France, we find chalcanthite in very aesthetic decimetric stalactites in the galleries of the old mine of Chessy (Rhône). It is also reported in small blooms in Barlet and Marsanges (Haute-Loire), Salsigne (Aude), Montroc (Tarn) and Cap Garonne (Var). 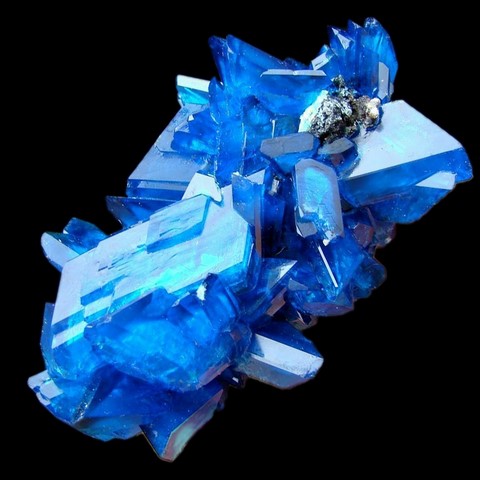 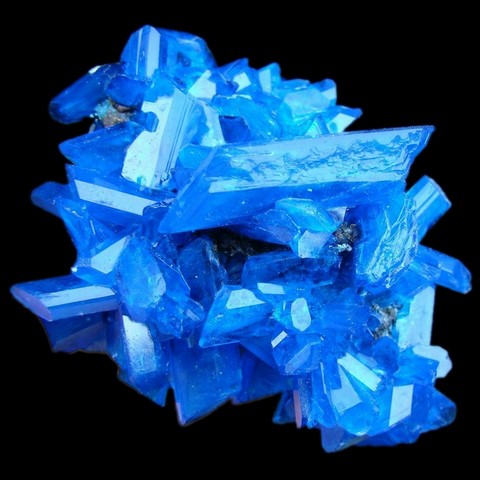 Chalcanthite has long been synthesized to produce spectacular sets of intense blue crystals. If these samples have almost completely deserted the mineral shows for many years, we find on the web very beautiful crystals of chalcantite for sale. The crystals measure up to 10 cm and are on matrix of natural rocks or on other natural mineral species such as quartz. Chalcantite is a hydrated copper sulphate that can be easily purchased in powder form, it is used in agriculture as a fungicide. By saturating a solution of heated distilled water with this copper sulfate, then allowing the solution to cool and evaporate, it is possible to grow such crystals very easily in either on just about anything. Be careful, however, these crystals are not stable, they are sensitive to water and dissolve easily. As with time and with dehydration, they turn white to become opaque and whitish. Copper sulphate is harmful if swallowed and irritating to the eyes and skin, so these samples should not be passed on to all hands.