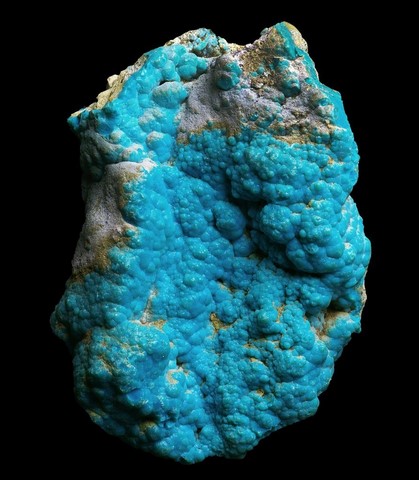 Chrysocolla is a secondary silicate found in the oxidation zone of copper deposits. It is the most common copper silicate, it can hold up to 9% water. It owes its name to the Greek khrusos (gold) and kolla (glue), because this mineral was formerly used for the welding of gold. It is usually cryptocrystalline mass concretized stalactitiform to shapeless, earthy coatings or encrustations, sometimes adopting an opal or enamel appearance. The crystals are very rare, acicular. The chrysocolla has hues spread throughout the range of greens and blues, has a vitreous, porcelain or earthy sheen and a typical conchoidal fracture. Its density is variable because of frequent mixtures with opal and other silicates, phosphates or oxides of copper. In addition to their occasional role as copper ore (Nijni Taguil in Russia, Arizona, Boleo in Mexico), the chrysocollas veined or banded, particularly aesthetic have a use as gemstones or ornamental stones, in this case it is often closely intertwined with chalcedony, which gives it sufficient hardness for the cutting and malachite and azurite that enhances its color. 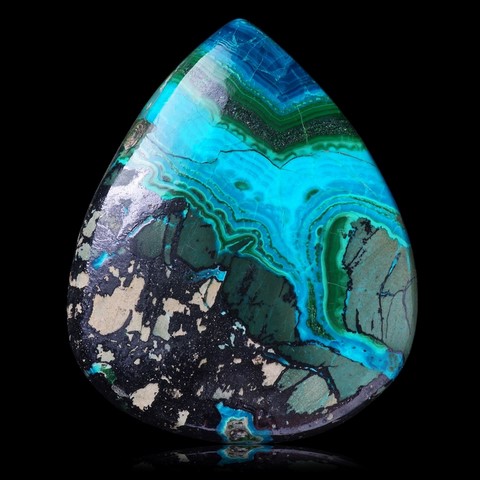 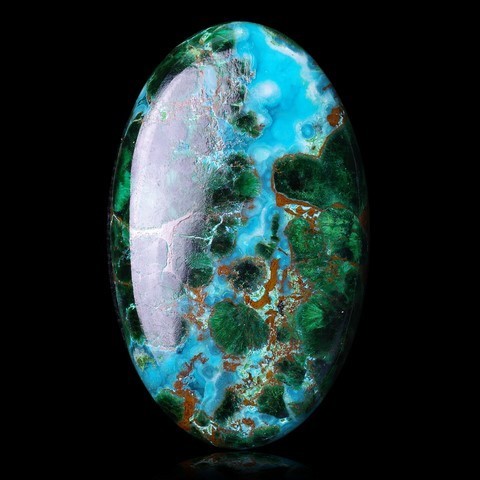 Chrysocolla in the World

The finest samples of chrysocolla are decimetric masses of a brilliant blue color from the copper deposits of Katanga (Democratic Republic of Congo) : Kakanda, Kambove and Likasi mainly. The Arizona copper deposits also provided superb samples, often pseudomorphs : the Ray (Superior) and San Manuel (Tiger) mines are famous for their epsomite pseudomorphs grouped in 5 cm tufts, and their decimetric masses exploited as copper ore ; the Baghdad Mine near Prescott and Tuspiration near Miami have yielded magnificent azurite pseudomorph. The large copper deposits of Chile (Chuquicamata, Farola) still have areas rich in chrysocolla. Good specimens also come from Italy (Elba Island in Tuscany and Iglesias District in Sardinia).

In France, we find the chrysocolla anecdotally. It is reported in Crozet (Loire), Lantignié, Longefay, Chessy and Propières (Rhône), Argentolle and Molérats (Saône-et-Loire) or Montroc in the Tarn.

The chrysocolla can pseudomorph other species such as malachite or azurite.

Some polished stones or some nodules of magnesites or others can be coated with green resin and sold for chrysocolla although these practices are rather intended to imitate turquoise...