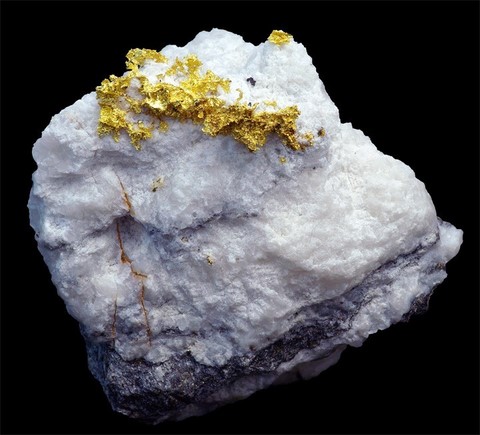 A mythical metal and mineral, gold is of hydrothermal origin present in many types of hydrothermal deposits. Once these deposits are eroded, gold is found in flakes and nuggets in rivers around the world, where it can concentrate to form deposits : the placers. The Witwatersrand basin in South Africa is thus a gigantic place of more than 2 billion years which constitutes the largest accumulation of gold on the planet. It supplied over 50,000 tons of gold and is still the largest gold district in the world today. Gold owes its name to the Latin aurum, which designated it. A metal of strategic and monetary importance, gold has been actively sought after since ancient times. Up to 2020 total gold production is estimated at around 165,600 tons. Melted together in a single edifice, these glitter and nuggets would form a cube of more than 20 meters of edge ! Native gold is the most malleable and conductive of all metals. It forms a complete solid solution with silver (the natural gold-silver alloy is called electrum). Pure, it has a yellow color which becomes paler the more the quantity of silver is important. Its density exceeds 19 : gold is one of the heavyweights of the mineral world. Gold crystals are very rare (cubo-octahedra, octahedra, dodecahedra, often hollowed, flattened or rounded, reaching 2 cm) but they are frequently twinned. Gold occurs above all in reticulated, dendritic assemblages, in very spectacular arborescences, in leaves or in spongy masses.

Gold will forever remain a mythical metal whose history is inextricably linked with that of man. The work of gold is almost as old as that of copper and merges with the dawn of our Civilization, at the beginning of the 5th millennium BC, before its work spread to Europe in the 4th and 3rd millennia. This first gold of Humanity now appears to be well located in the Bulgarian necropolis of Varna, on the shores of the Black Sea ; it came from gold panning and collecting nuggets. Gold is along with platinum, one of the few metals that occurs primarily in nature in metallic form, while an overwhelming majority of these combine with sulfur or oxygen to form sulfides and oxides. The use of this term has, however, enshrined an ambiguity : the native gold of the deposits is indeed practically never pure gold but an alloy of gold and silver (the electrum). Pure gold is indeed rare, restricted to the flakes and nuggets of superficial areas where it results from a phenomenon of chemical precipitation which purifies it. The nuggets, despite the legends that surround them, participate only in a negligible way in the world production of gold, although they can individually weigh several hundred kilos for the records. Most of these legendary nuggets no longer exist today, inexorably turned into gold bars. It was not until the passion of a few rich collectors willing to pay more for the nuggets than their gold weight to tear them from the crucibles. Most of the gold stocks are kept in the form of gold bars in the central banks of the countries (2,200 tonnes of gold at the Banque de France) where it serves as a counterpart to the paper currencies in circulation, and as a guarantee for international transactions. A monetary standard for 200 years, this key role in the economy is crumbling at the start of the computer age in favor of virtual currencies, despite an increasing quantity circulating in the form of coins or small bars in trade. Jewelery remains by far the main outlet for this metal : it consumes more than 75% of production and has hardly run out of steam over the centuries. Its inalterability gives gold a prominent place in scientific instrumentation, electronics and computing, and gold leaf fabrication, but these uses only require relatively small quantities compared to jewelry. 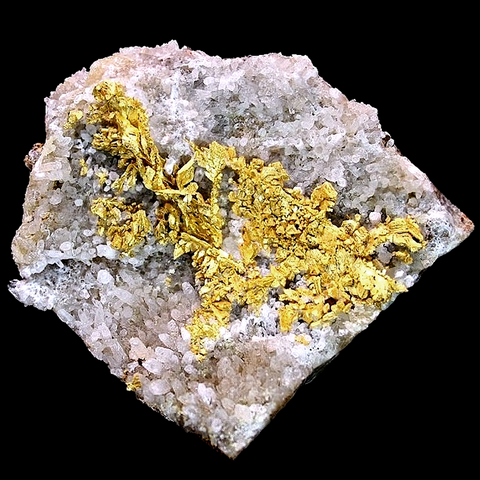 Native gold crystals on quartz at Round Montain Mine, Nevada, USA
© Kevin Ward 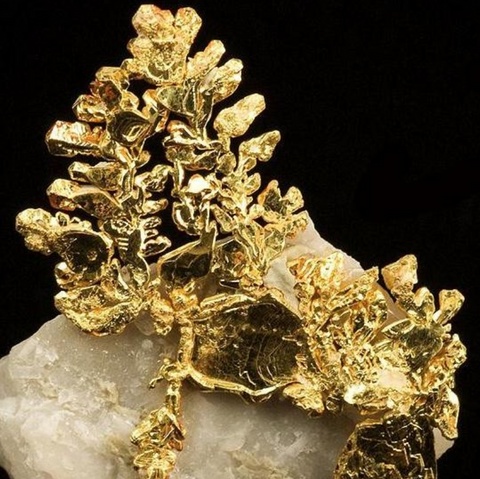 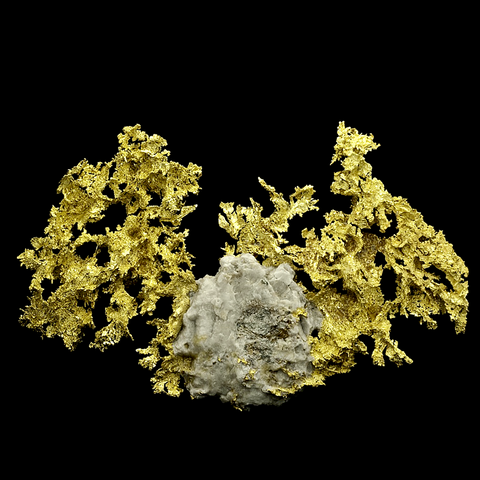 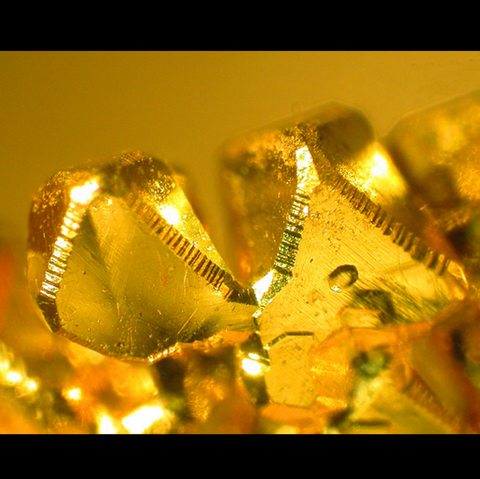 Native gold in the World

Although mainly present in very fine, often microscopic, patches, native gold sometimes occurs in large masses, forming blades or nuggets like the 128 kg vein gold cluster discovered at the Morgan mine in California. In Europe, the best specimens have been found in Romania (Brad, Zlatna, Rosia Montana and Baia de Aries), and at Hope's nose, Torquay, England. The most impressive nuggets discovered, approaching 100 kg, come from the Australian districts of Bendigo and Ballarat in the state of Victoria, where the Holterman nugget weighing 285 kg was discovered in the last century !!! The biggest Californian and Brazilian nuggets (like that of Serra Pelada), more modest, still weigh 30 or 40 kg.

In France, centimetric masses of gold have occasionally been encountered in the antimony and gold mine of Lucette (Mayenne), and in the small gold vein of La Gardette (Isère). Beautiful, almost centimeter-scale beaches have also been discovered in numerous auriferous veins of Limousin, in particular in Douillac and Laurieras. The biggest nugget discovered in France is that of Avols in Ardèche : it weighs 543 g.

For gold, the fakes inventoried are mainly assemblies and collages of real pieces or crystals of native gold on fragments of matrix or on quartz crystals.