What is a vein in geology ? 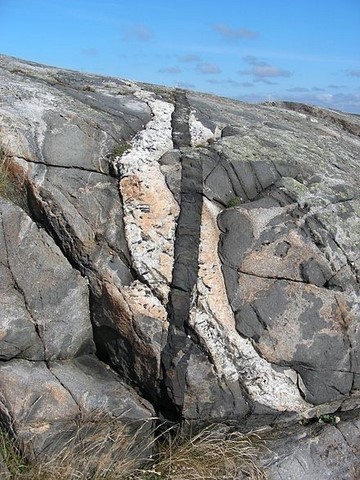 Vein is a descriptive term, without genetic connotation, which designates a blade of rock of centimeter to metric thickness which corresponds to the filling of a fracture. It usually cuts rocks of various kinds, called host rocks.
The nature of the filling makes it possible to distinguish several major types of veins :

The filling was effected by the circulation of hydrothermal fluids which deposited in the form of minerals salts which they contained in solution. Hydrothermal veins are mainly composed of quartz, baryte, fluorite, but also commonly enriched in metals or metal sulphides (Pb, Zn, Cu, Ag, Au, etc...) and can then constitute important mining deposits. They are subdivided according to various criteria of filling (gold veins, lead-zinc, polymetallic...), temperature (epithermal veins, mesothermal, pneumatolytic...), or context (extension vein, tension, etc...).
Epithermal vein : hydrothermal vein linked to aerial volcanism (as opposed to submarine volcanism). The fluids (water, carbon dioxide, sulfur dioxide, etc...) associated with the volcanic phenomenon will indeed deposit in cracks until they are filled with salts which they transport in the dissolved state. These are usually deposits of gold and silver, sometimes also of base metals.
Polymetallic vein : a vein of hydrothermal origin containing several metals present in variable chemical combinations (sulphides, but also oxides or silicates). In the majority of polymetallic veins, the filling includes abundant sulphides of iron (pyrite), zinc (sphalerite), copper (chalcopyrite) and lead (galena). One speaks in this case of polymetalic vein with Zn-Cu-Pb (the pyrite not being an iron ore, this metal is not generally mentioned in the procession of metals).
Uranium vein : hydrothermal vein containing uranium minerals, which can become a uranium deposit if the quantities of ore are large enough. In France, uranium veins from Limousin (Margnac, etc...) from Vendée (L'Escarpière, la Commanderie, etc ...) or from Forez (Les Bois Noirs) have constituted important deposits.
Pneumatolytic vein : forms at the end of the crystallization of a magma between 374°C and 600°C. During this step, called pneumatolysis, the transport and deposition of mineralizing fluids are carried out in the supercritical state (above 374°C, critical water temperature). They then exhibit an intermediate behavior between the liquid state and the gaseous state, with particular properties : a high density like that of liquids, an intermediate diffusivity coefficient between that of liquids and gases, and a low viscosity (like gases). These quartz veins contain so-called pneumatolytic minerals (beryl, tourmaline, topaz, cassiterite, rare earth phosphates, lepidolite, etc...) which express the concentration in the last fluids of most of the gases and rare metals of the magma (B, Be, F, Li, La, Ce, Nb, Sn, etc...) ; they are often located in the fractures on the periphery of the generating granite.

Sedimentary veins or clastic veins are rarer : they result from the filling of open cracks in a sedimentary context, either by sand injection, or by gravity deposition of detrital material.
Back to summary