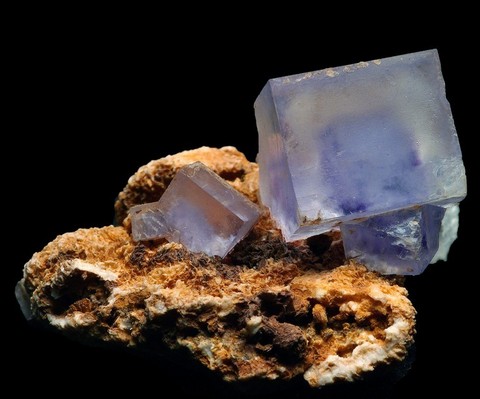 Fluorite is a mineral usually very appreciated by mineral collectors. Its name comes from the Latin "fluere" (flow) because its melting point is quite low for a mineral and is used as a flux. This is a very common hydrothermal mineral, it is also found in some pegmatites, in the alpine clefts and in fumarolic products. It often takes the form of cubes, cubo-octahedra, octahedra, rarely dodecahedra or hexahedra, it can also be botryoidal. The colors are extremely varied and depend on the nature of the trace elements that substitute punctually calcium atoms. There are colorless fluorite, yellow, green (samarium), blue (yttrium), purple, black (antozonite variety) and pink to red for alpine specimens. Several different colors can also coexist in the same crystal, sometimes generating spectacular zonations. It is very often associated with baryte, quartz and various sulfides (galena, pyrite, etc...). It is a mineral widely exploited across the world, it is used as a flux in metallurgical industry, it is also the primary source of fluorine. It is rarely used in jewelery because of its too low hardness but is still commonly cut. 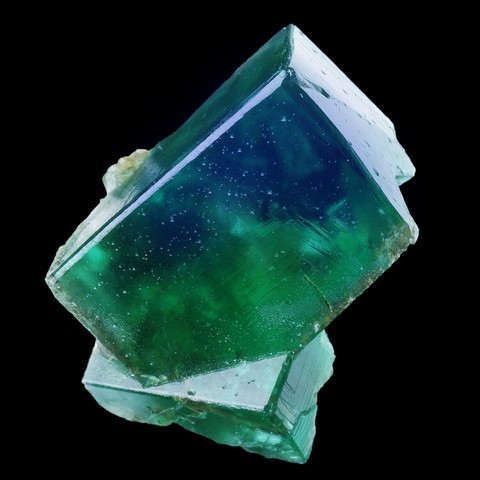 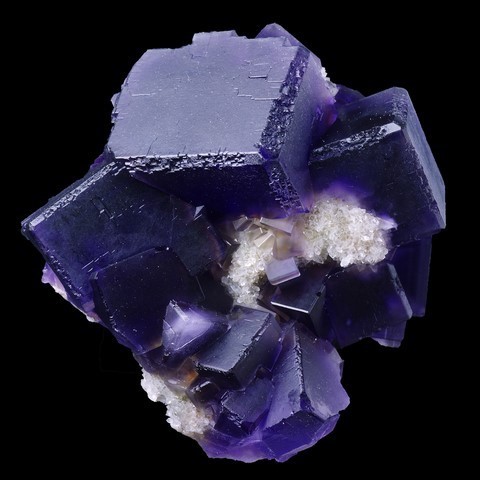 Purple fluorite from from Berbés, Spain 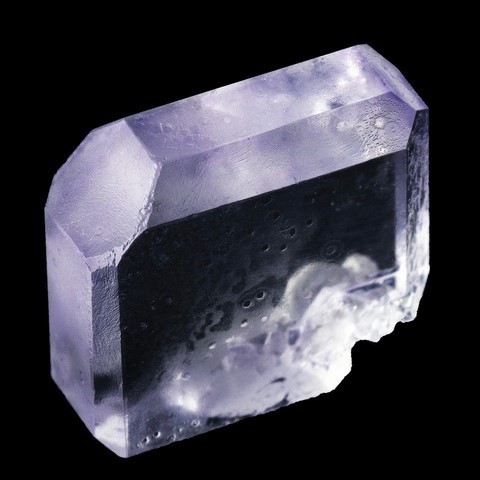 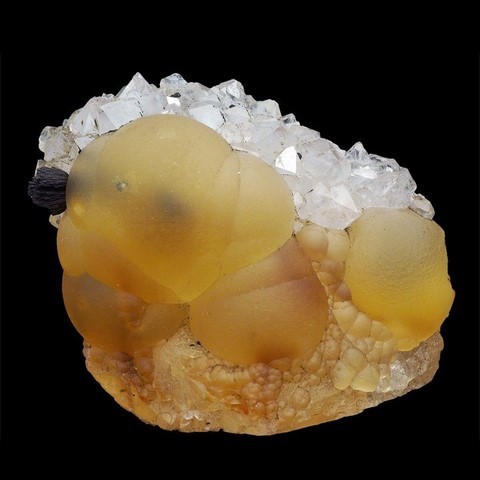 Fluorite in the World 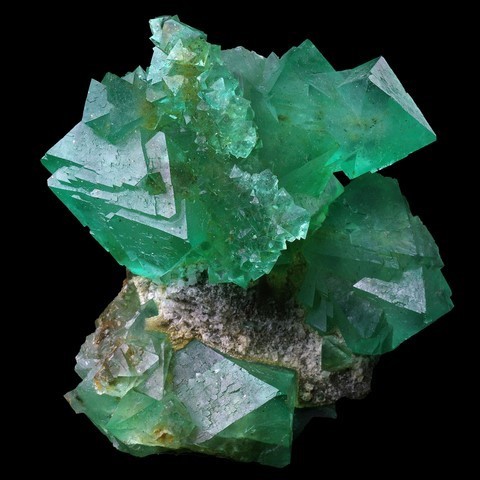 It is difficult to be exhaustive so deposits which provided spectacular crystals are numerous... Examples include English mines of Cumberland with their shiny green, yellow or purple crystals with strong blue fluorescence (due to the presence of europium), but also the U.S. occurrences such as Cave-in-Rock. China now also provides many excellent crystals, unfortunately often poorly or not georeferenced. We also highlight the large blue crystals from the Spanish Asturias, emerald green octahedrons from Riemvasmaak area on the border between South Africa and Namibia (photo on the right side) or the yellow, green or red balls from Nasik, India. The edges of larger crystals discovered exceed the meter ! 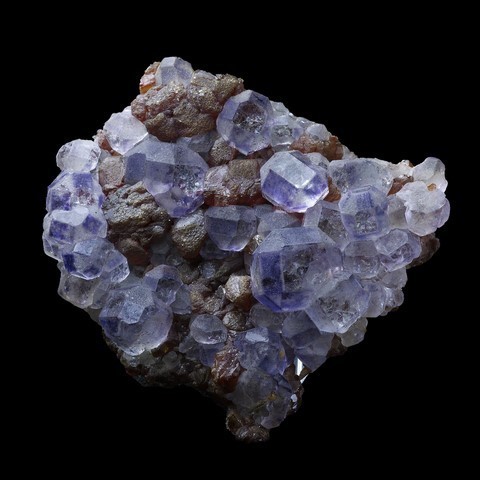 Fluorite cubo-octahedra from Huanggang Mine, China 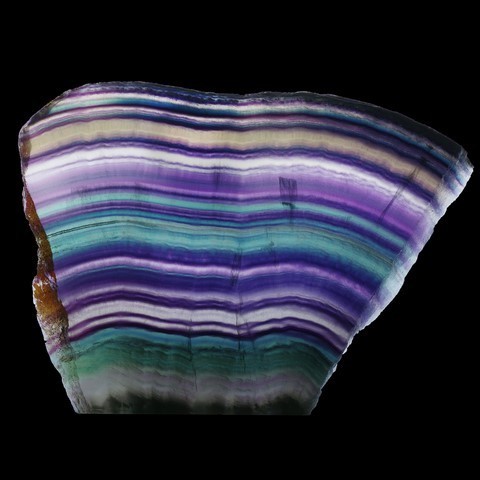 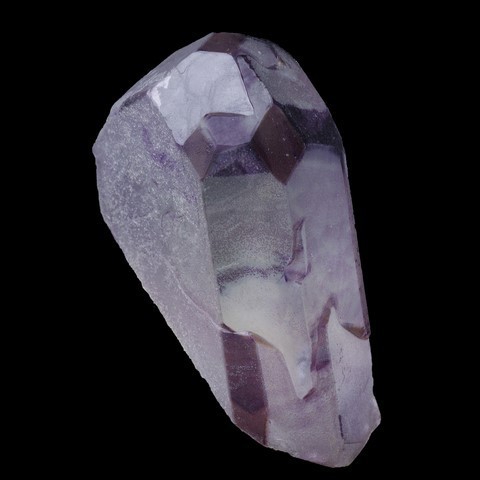 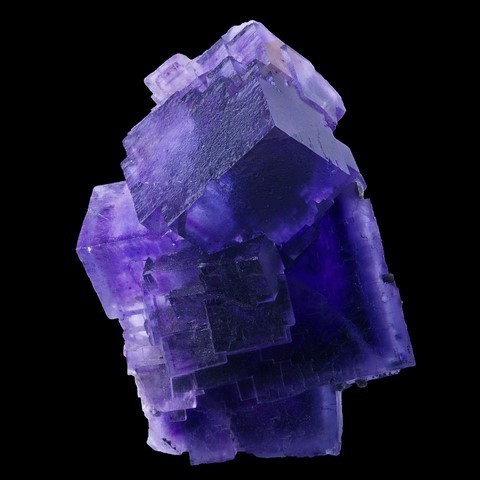 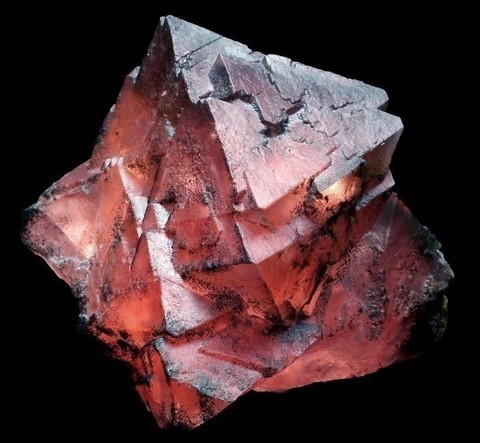 France has extraordinary deposits that have provided some of the best crystals in the world, which the most fabulous blue cubes. It should be noted specimens from Puy-Saint-Gulmier (electric blue) and from Le Beix mine in Puy-de-Dôme, but also from Le Burc or Montroc in Tarn where crystals can exceed 30 cm edge ! Beautiful yellow cubes were also discovered in Chaillac (Indre),  in Valzergues (Aveyron) or in Piboul (Lozère). Finally, we must emphasize the pink to red octahedral fluorite often located at the top of smoky quartz in alpine slots in the Mont-Blanc Massif (photo in margin), the latter may exceed 10 cm edge ! 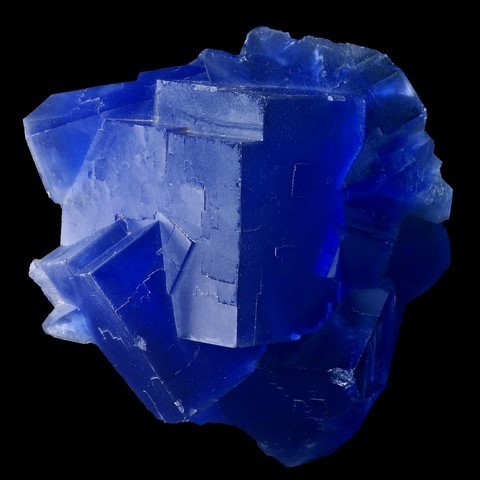 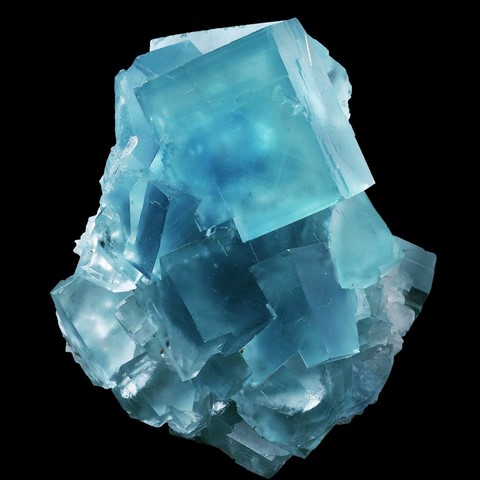 Fluorite from the Burc Mine, Tarn, France 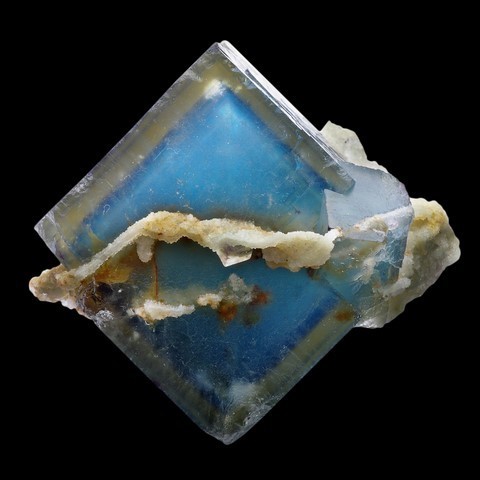 Fluorite from from Le Beix Mine, Puy-de-Dôme, France 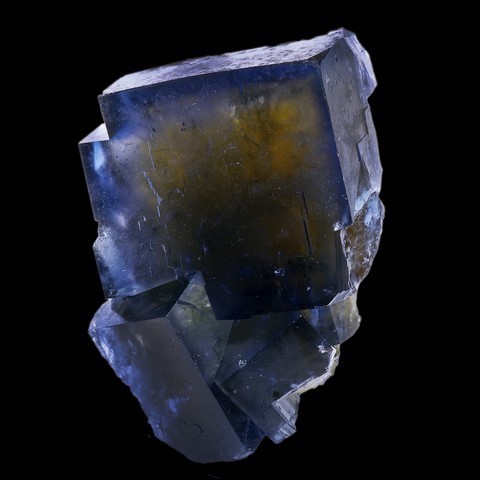 Fluorite has a fairly typical twin that combines two individual crystals interpenetrating ideally with 18 inside corners (photo in largin). It also calls fluorite twin law. This form is abundantly found on the Weardale English deposits where almost all the crystals are twinned.

We can also note one second twin much less common for fluorine and harder to see : the spinel twin law. It is characterized by a relatively flat crystals. It occurs in Naica deposits, Peru and sometimes on pakistani pink fluorites. 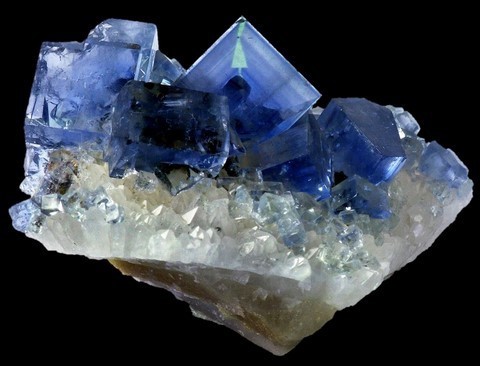 The "Frenkel defect" is the name usually given by mineral collectors to a special coloring that follows the direction of a large diagonal of a fluorite cube (green on the left photo of the sample that comes from the La Barre Mine in Puy-de-Dôme, France), whose most spectacular observation is perpendicular to one side of the cube.

In order to have more informations about this relatively rare color area we invite you to read our article on the subject here :

Common scams around fluorite often result in assemblies made with Pakistani pink fluorite. These fluorites are naturally and abundantly associated with centimeter size muscovites in pegmatites, it is common that octahedrons fragments are literally glued on muscovite pieces. Pakistani often use muscovites crystals to hide parts of the broken fluorite crystal. Renderings are very realistic, without careful observation these assemblies can be easily overlooked...

We can also highlight that the fluorites are often oiled to improve their visual appearance and hide small impacts. This treatment is applied to 95% of China's fluorites and many fluorites from Valzergues. This treatment is very common and reversible. It is possible to remove the greases with an acetone bath and water with detergent. However you should check before that the sample does not repair because glues are usually soluble in acetone. Much rarer, some large collection pieces were vacuum injected with oil (same treatment as emeralds) to hide the cleavage planes, without magnification it is impossible to distinguish this treatment.