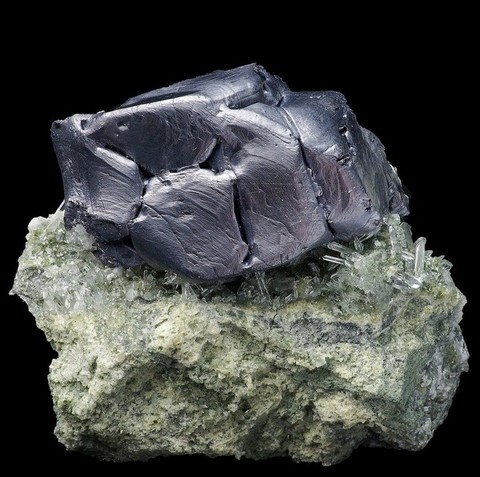 Galena is almost the only lead ore exploited today. Its name comes from the Latin "galena" (lead ore). It is a mineral that is found in a wide variety of geological environments : veins and hydrothermal deposits, volcanogenic and sedimentary deposits, and more rarely in pneumatolytic deposits or pegmatites. It usually takes the shape of cubes, cubo-octahedra or octahedra, but it can also take tabular shapes, reticulated or dendritic. Its crystal lattice can assimilate silver or bismuth atoms it is why sometimes it is a silver ore. It is a mineral mined since ancient times, it is the main source of lead that enters into the composition of batteries and it is also used more occasionally in the production of weapons, munitions and some glasses. Lead is the cause of important neurological disorders. Since its toxicity is known, it is used fewer and fewer, once they were made pipes for drinking water, dishes, inks and paints (white lead). In ancient Egypt galena crushed was also used as kohl (eyeshadow). In the early twentieth century, galena entered in the manufacture of radio station (the galena radio), in 1874 Karl Ferdinand Braun discovered the semiconducting properties of galena. He won the Physic Nobel Prize in 1909.

Galena in the World 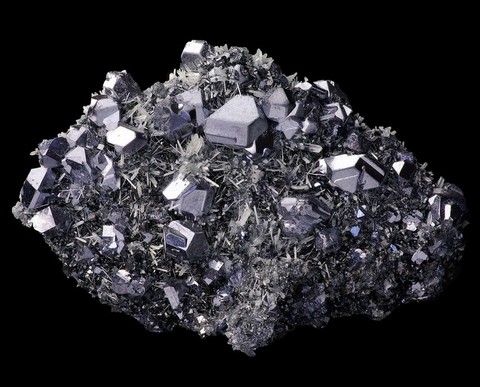 Galena deposits in the World are too numerous to be exhaustive. May be mentioned crystals from Joplin, Missouri, USA sometimes exceeding 30 cm edge ! Very shiny crystals (and sometimes twinned) from Madan area in Bulgaria are also quite exceptional (photo in margin). It may be noted Dalnegorsk Russian deposit which also provided superb crystallization, Mount Isa in Australia, and England. 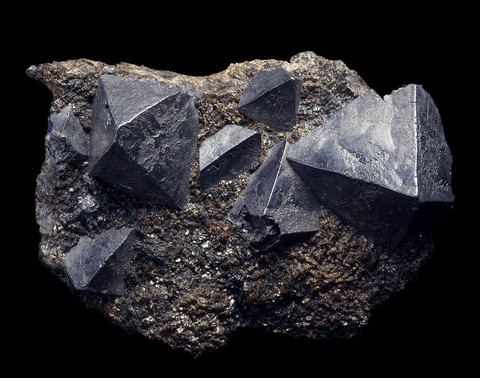 France has beautiful deposits that provided superb crystallisations. We can note in particular the crystal veins from Pontgibaud District in Puy-de-Dôme, which specimens are now very hard to find... Crosslinked galena from Saint-Laurent-le-Minier Gard are also quite typical. It should also be emphasized occurrences of Peisey-Nancroix in Savoie, La Mure in Isère and the beautiful octahedral groups from Planioles in Lot (photo in margin). 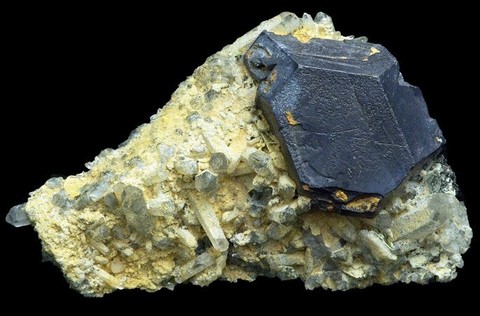 Twinned crystals of galena are relatively rare. The best known is the Gonderbach twin law (spinel twin law) because it is usually accompanied by a strong flattening, leading to hexagonal platelets (photo in margin), stockier twinned crystals are rare.

Fluorite twin law is very rare for galena, has been reported with certainty in Clausthal deposit in Germany. 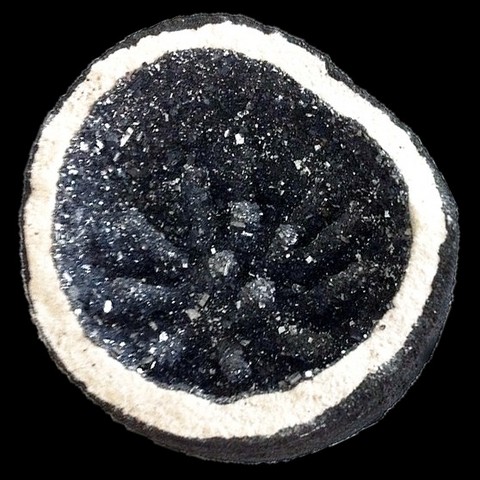 Contrary to what you might think at first, scams around galena are relatively frequent. The most usual are Moroccan galena geodes, sometimes with stalactites, usually sold in the souks. Galena cleaves easily into small cubes, cubic galena crushed cubic fragments crushed are mostly glued in geodes and quartz squarely on the painted pottery and stalactites are in reality matchsticks covered with small pieces of galena (photo below against). These assemblies are well made enough to deceive beginners. 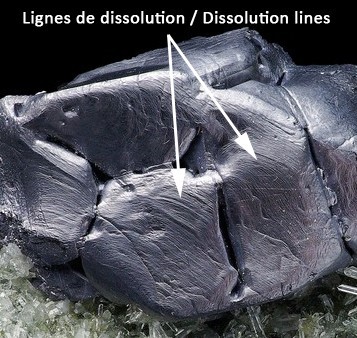 More sophisticated, we can highlight the "holocubes" from Madan which were actually carved with micro-blaster, you can read our detailed article following this link : Galena holocubes from Madan, Bulgaria. Some galena of this deposit have a "molten" look (first photo), this morphology is natural, however, the case of galena holocubes should push us to pay attention to this type of material because some of these galena have potentially been sanded... It can be difficult to detect visually sanding, the foolproof method is to examine the sample through an electron microscope, sandblasted specimens have small craters on the crystal faces and have no natural growth or dissolution signs. The photo in margin shows a natural crystal with lines and dissolution terraces. 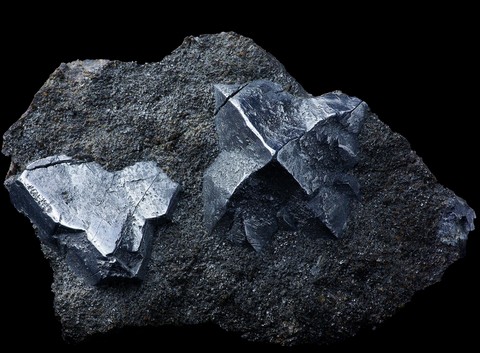 Last practice identified on some galena from Planioles, it is brushing the crystal faces using a wire brush mounted on a mini-motor (Dremel-type). This treatment greatly increases the surface gloss of the specimen, but also destroys natural appearance and blunts the edges... On the picture in margin we see clearly wavy edges and rounded corners, the reflector power of faces is also very strong.