Gormanite is a secondary phosphate that forms a series with souzalite, the magnesian term. It owes its name to Canadian mineralogy professor Donald Hermet Gorman of the University of Toronto. It is a very rare mineral which is formed preferentially in granitic pegmatites, but seems to be able to be satisfied with varied contexts since it is also found in the oxidation zone of ferriferous phosphate deposits and it is known exceptionally in tonalite fissures. It forms small elongated lamellar crystals, not exceeding one centimeter, frequently united in radial aggregates, of a dark blue-green color. It is a mineral intended only for the collection which is little known to the general public. 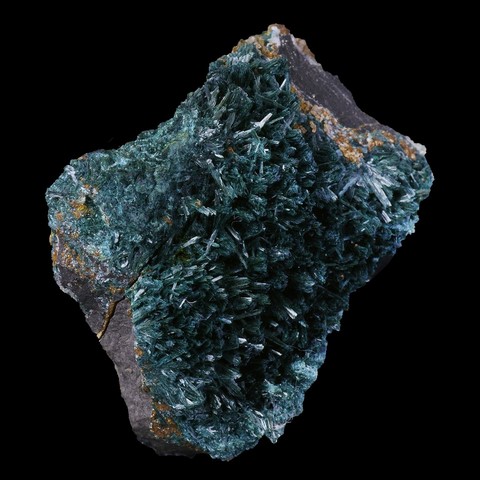 Gormanite is found in the pegmatites of New Hampshire (USA) and Karibib in Namibia and Linópolis (Brazil) and in filling fractures in phosphate iron ores at Big Fish River (Yukon, Canada), its site of discovery (main picture). It is present in the fissures of the tonalites of Bisbee (Arizona, USA) where it provided excellent crystals of 1 cm.
Gormanite in France
This mineral is present in crust on certain pyrites from the Salsigne gold mine (Aude) as well as in a pegmatite from Collioure (Pyrénées-Orientales).

This mineral twins around the {001} compositional plane and the [010] axis, but is not observable due to crystal size and morphology.

No fake identified for this mineral species.