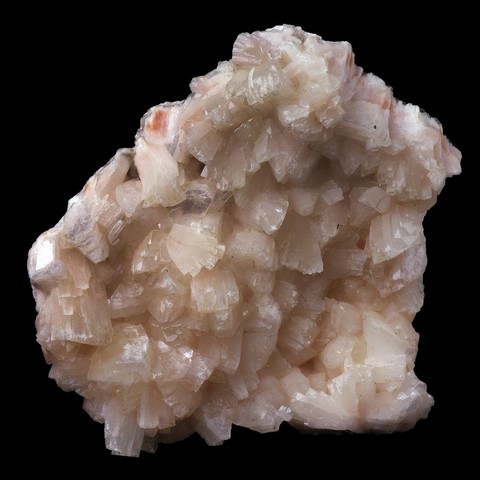 Heulandite belongs to the large group of zeolites, hydrated aluminosilicates made up of a framework crisscrossed with channels in which water and large cations are inserted. It is one of the most beautiful zeolites, typical of cavities in basaltic rocks and granitic pegmatites, which is also sometimes found in alpine clefts and in certain metallic hydrothermal deposits. It was named in honor of the English mineral collector John Henry Heuland. It forms stocky crystals, generally tabular, flattened on the perfect {010} cleavage, with wavy or concave faces, often assembled in subparallel or scaly aggregates. Heulandite has a vivid vitreous to pearly luster, and a variety of colors : colorless, pure white, or faint pinkish ; sometimes yellow or red (fine inclusions of hematite), also gray or brown. Heulandite is one of the few zeolites that are sufficiently abundant and pure to constitute exploitable deposits. In order to meet the strong market demand, zeolites have been produced artificially since 1941. They owe this industrial success to their crystalline structure which presents channels of specific diameters in which water molecules can take place, attach themselves and move of hydrocarbons or ions, endowing these minerals with astonishing capacities of ionic exchange, dehydration or molecular sieves. The first use of zeolites was as a water softener in steam engines. Today they are used as a purifier of agricultural landfill effluents by capturing ammonia, as well as in the nuclear industry, for the extraction and fixation of radionuclides possibly present in the residual effluent solutions of reactors. The main current use of zeolites nevertheless lies in the petrochemical industry where they serve as molecular sieves for the separation of hydrocarbons. Easily dehydrated by heating, they then constitute powerful dehydrators. Because of its abundance in the volcanic cavities of the Deccan traps, it is often looked down upon by collectors who struggle to identify it. 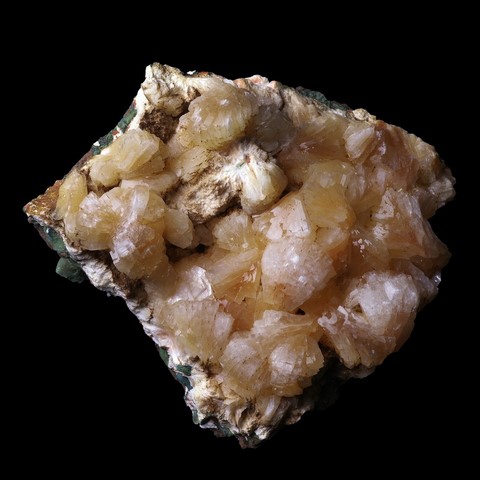 Magnificent groups of crystals come from the Hindu basalts of the Deccan : the districts of Poona, Mumbai and Nasik produce superb white crystals exceeding 10 cm. In this same region Jalgaon provides very attractive pink to brown crystals of 12 cm on quartz and apophyllite. Among the classic deposits, Iceland (Teigarhorn) has given very beautiful crystals up to 10 cm, while the American basalts of New Jersey (Paterson) and Oregon (Lowell) yield crystals of 5 to 7 cm , and those of the Bay of Fundy (Nova Scotia, Canada) of magnificent individuals of 5 cm. The highly sought after red specimens originate mainly from the Scottish deposits of Campsie Hills, Old Kilpatrick and Stirling, where crystals of a brick red to salmon red color up to 4 cm. Comparable but smaller samples come from Giumella and Val Duron (fassa valley, Trentino, Italy). In hydrothermal veins, heulandite is best known in good samples from the German Harz (Saint Andréasberg) and Australia (2 cm vermilion crystals at Tambar Springs).

In France, Cambo-les-Bains (Pyrenees) gave crystals of 15 mm. It has also been identified in micro-crystals in the Brie quarry (Haute-Vienne).