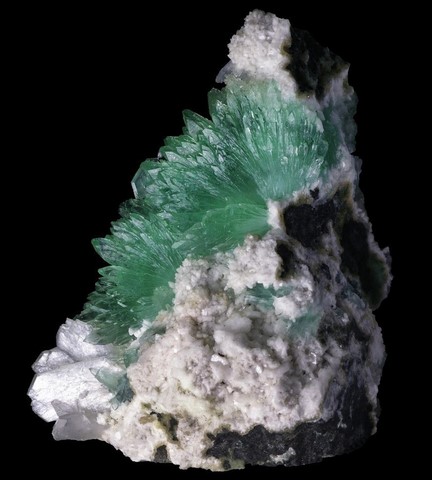 Apophyllite is actually a group of 3 minerals with similar compositions : fluorapophyllite, hydroxyapophyllite and natroapophyllite. Despite a high water content, its particular structure removes it from zeolites to which it is sometimes wrongly related. The minerals in this group are secondary and present in the vacuoles of the basaltic rocks that provided the finest and largest crystals in the world. Apophyllite is also present in hydrothermal veins and as a final hydrothermal alteration in skarns. It is also reported in the travertines of thermal springs. It owes its name to the Greek apophullos (which loses its leaves) because of its exfoliation under the heat of a blowtorch, its pearly white appearance, a little similar to boiled fish eyes, had formerly been called ichthyophthalmite (Greek words for "fish" and "eye"). Apophyllite occurs in different forms : in quadratic prismatic crystals, usually short, terminated by an octahedron rarely clustered in flowers or balls, less often in flattened tabular crystals. The faces of the prism are striated vertically. It is also found to be massive and lamellar in foliaceous or grayish aggregates of a white or greyish color, sometimes pink or water green (fluorapophyllite). It is a mineral exclusively destined to the collection, which forms sets of aesthetic and sought-after crystals. 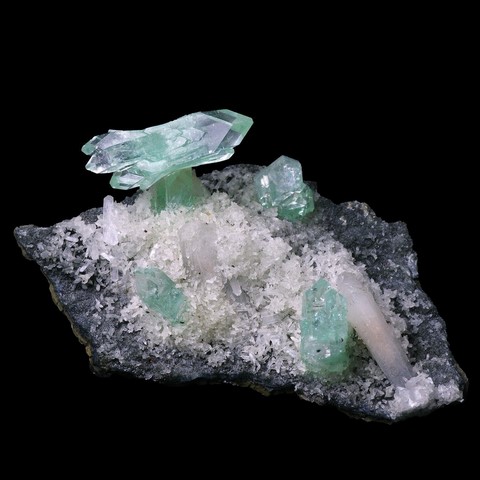 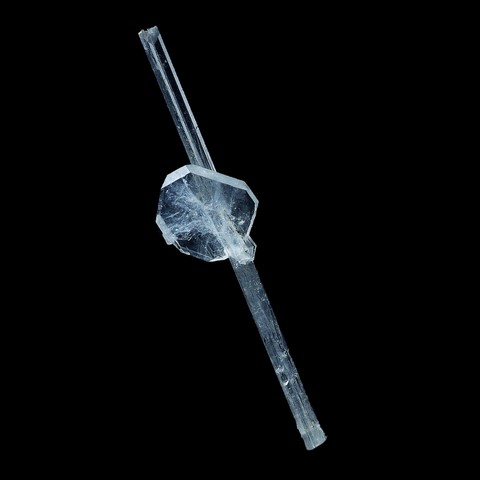 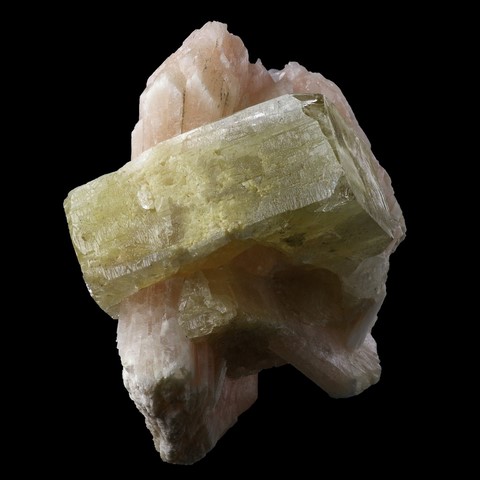 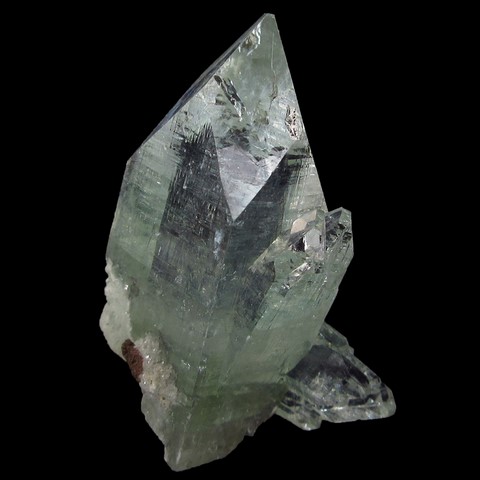 Apophyllite in the World

Fluorapophyllite : the world's best crystals come from the Deccan traps basalts in India (Poonah, Nasik, Mumbai), where they stand in beautiful limpid elongated prisms, ending in pyramids, with a beautiful green color exceeding 6 cm and large colorless to green pseudocubic crystals commonly showing hourglass zonation. Large clear to light green 15 cm crystals were found in Antas (Rio Grande do Sul, Brazil). Triassic basaltic traps from eastern USA (Paterson in New Jersey and Fairfax in Virginia) and Icelandic basalts (Berufjord) also yielded good transparent crystals up to 6 cm. Fluorapophyllite from hydrothermal veins are rarer. Magnificent pink crystals, however, have been extracted from silver veins of Saint Andreasberg (Harz), associated with stilbite and harmotome and silver veins of Guanajuato Mexican (Refugio, Valenciana, etc ...) have given incredible red crystals.
Hydroxyapophyllite : it is found in the same deposits as fluorapophyllite but also in the manganese deposit of the district of Hotazel (South Africa) which provided crystals exceeding 10 cm although it is most often manganiferous calcite pseudomorphs.
Natroapophyllite : its most original site is the skarn of Sampo (Japan), which presents zoned prismatic crystals (alternation of natroapophyllite and fluorapophyllite) with a truncated pyramid appearance. Natroapophyllite is also reported in the Boliden pyrometasomatic deposit (Sweden) and in the hydrothermal veins of Palo Verde District (San Luis Potosi, Mexico).


Apophyllite in France
In France, the only known crystals have a fluorapophyllite composition and are millimetric. It is found in the vacuoles of some basalts of the Massif Central as in Carlat in the Cantal or St-Jean-des-Ollières or Puy de la Piquette in the Puy-de-Dôme.

Assemblages and collages are common for this species due to its overabundance in the Indian mineral market.