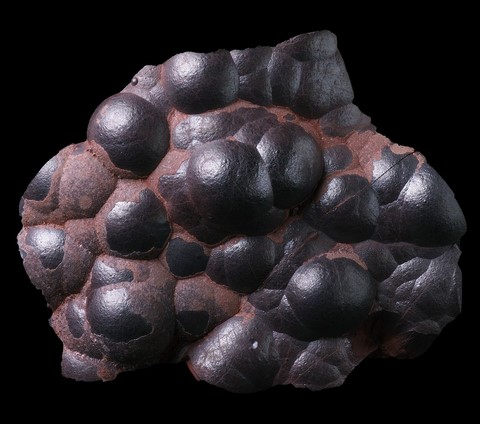 Hematite is an iron oxide, its name comes from the Greek "haima" (blood) because its trace is red. It is a mineral that is found in a wide variety of geological environments : sedimentary basins, hydrothermal deposits, metasomatic deposits, and more rarely in volcanic fumaroles, in alpine clefts and in veins. It is a mineral that does not oxidize and does not deteriorate, so it can form large alluvial deposits. Hematite occurs in various forms, it can be rosettes of tabular crystals in varying thicknesses, it is called "iron roses", the hematite lamellae can also be randomized or take dendritic forms, they usually have an hexagonal shape. It also occurs in fibrous to compact masses, sometimes with botryoidal surface (photo in margin). More rarely it can replace octahedrons of magnetite, called hematite pseudomorph after magnetite (or martite). In very rare cases the crystals may be prismatic identical to those of the corundum with which it shares an identical crystalline structure. It is always gray-black, very small crystals (including micro-crystals) are blood red. This is the main iron ore for the production of cast iron, steels, alloys. Finely crushed, it is also used as a pigment in the glass and ceramic industry, prehistoric men had also understood that because they used the coloring property mixed with oils to paint murals on the walls of their caves. More rarely it is cut and used in jewelery. 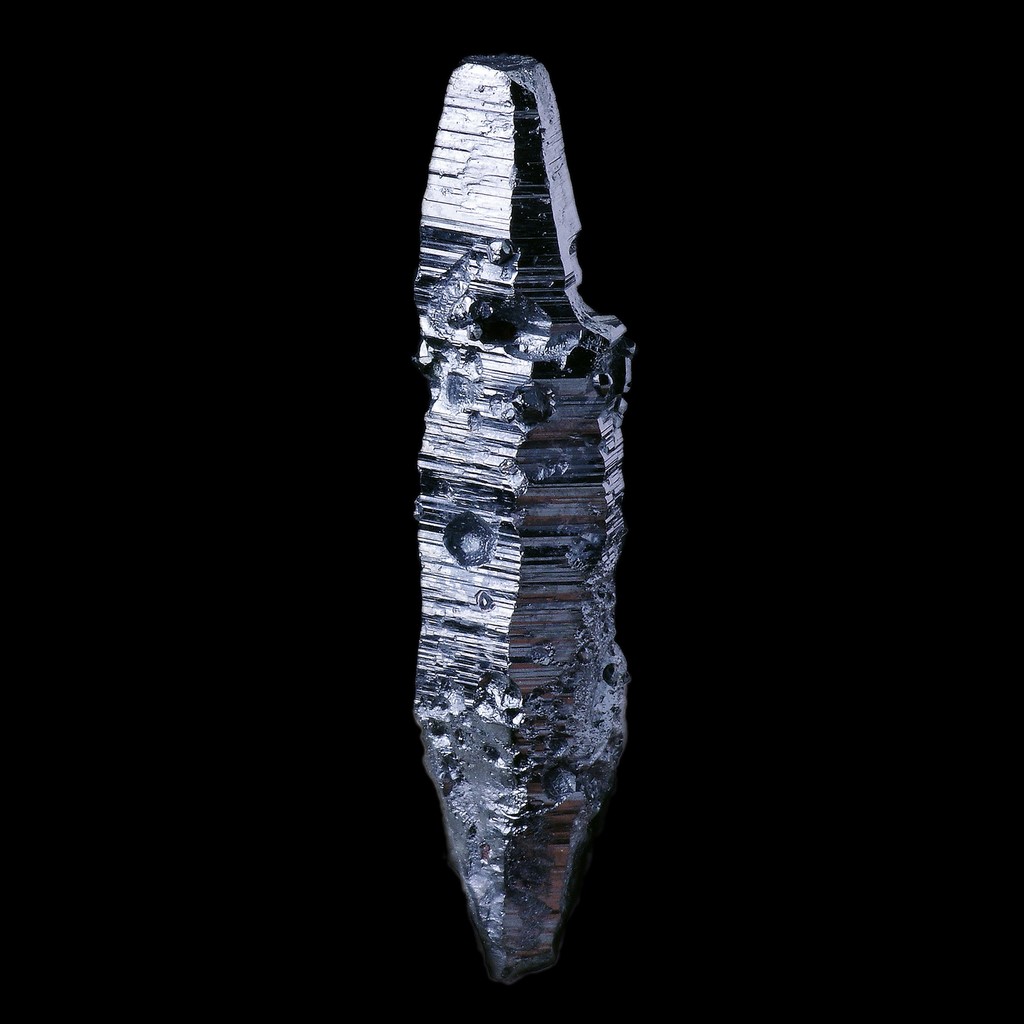 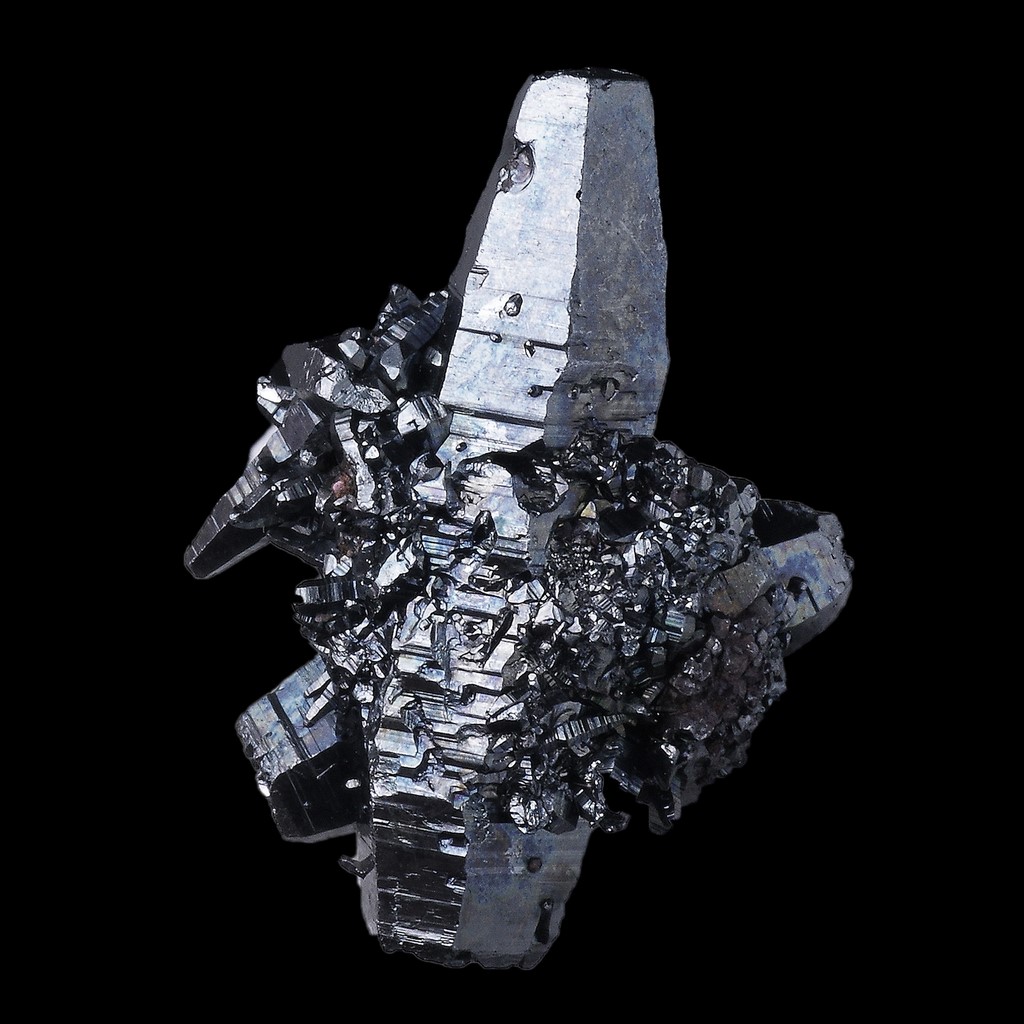 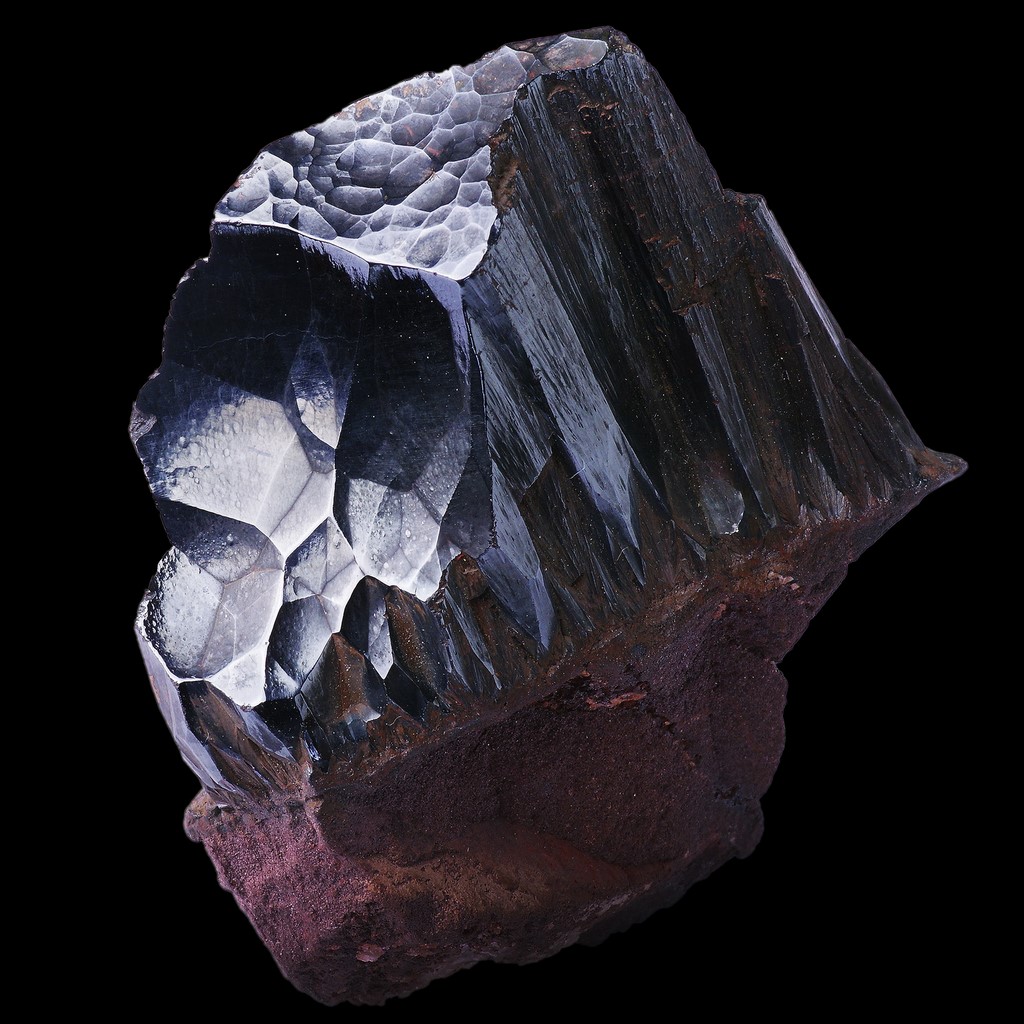 Hematite in the World 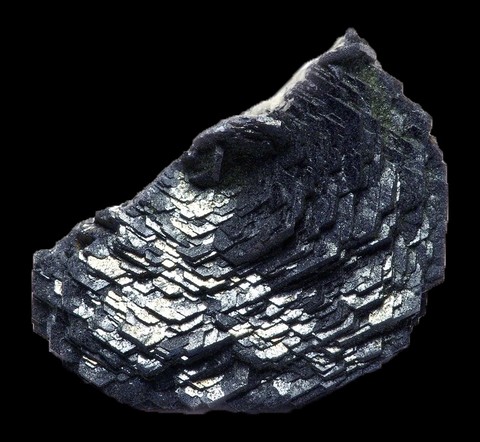 Hematite deposits in the world are too numerous to be exhaustive. Nonetheless, it may be noted exceptional crystals in Brazil that can exceed 15 cm ! Skarns of the island of Elba in Italy and the Ural Mountains provided also beautiful iridescent crystals of 6 cm. Note the beautiful iron roses from Swiss Alps (St. Gotthard) and Austria which can reach up 15 cm in diameter (photo in margin) ! Less known, huge tabular crystals from Wessels mines in South Africa and Zambia that are equally so impressive (over 10 cm). On this last origin hematite crystals may be associated with gorgeous rutile with epitaxial growth as in Bahia, Brazil or Cavradi, Switzerland. 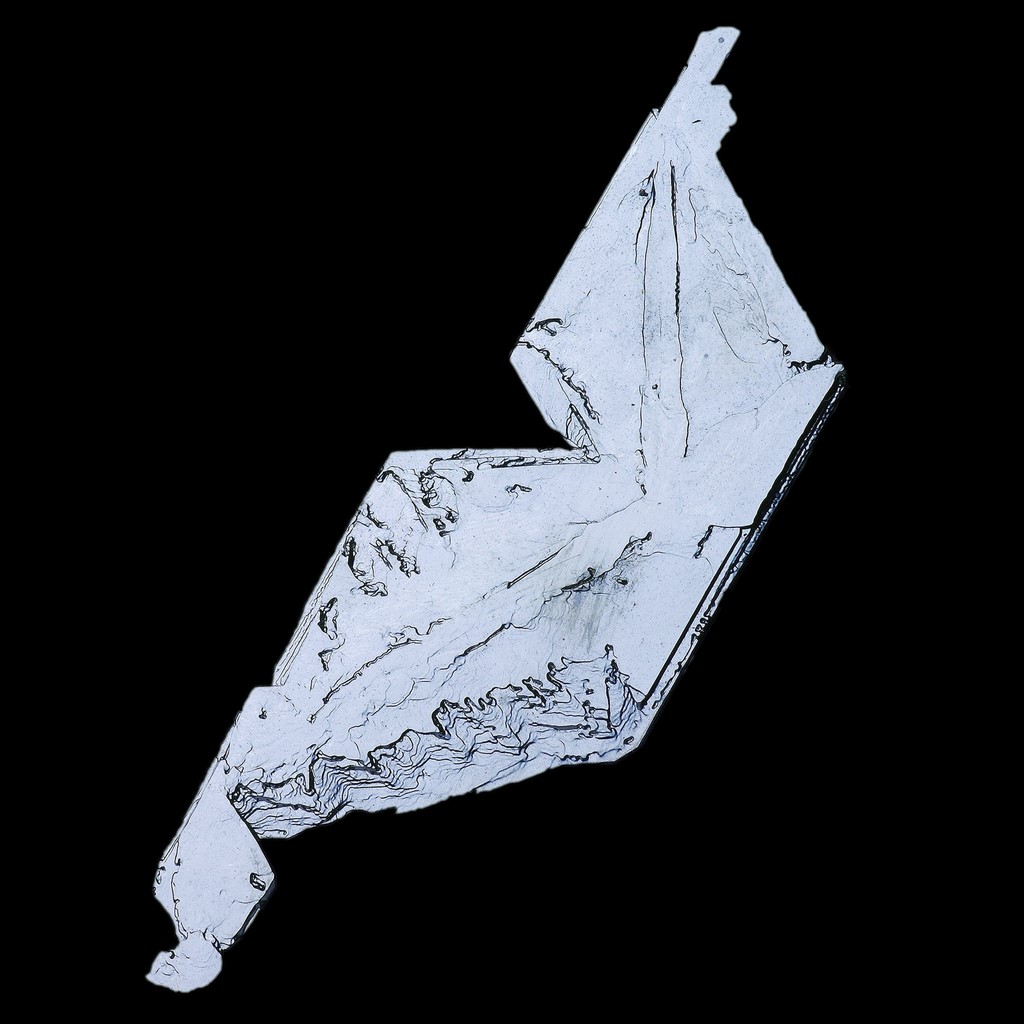 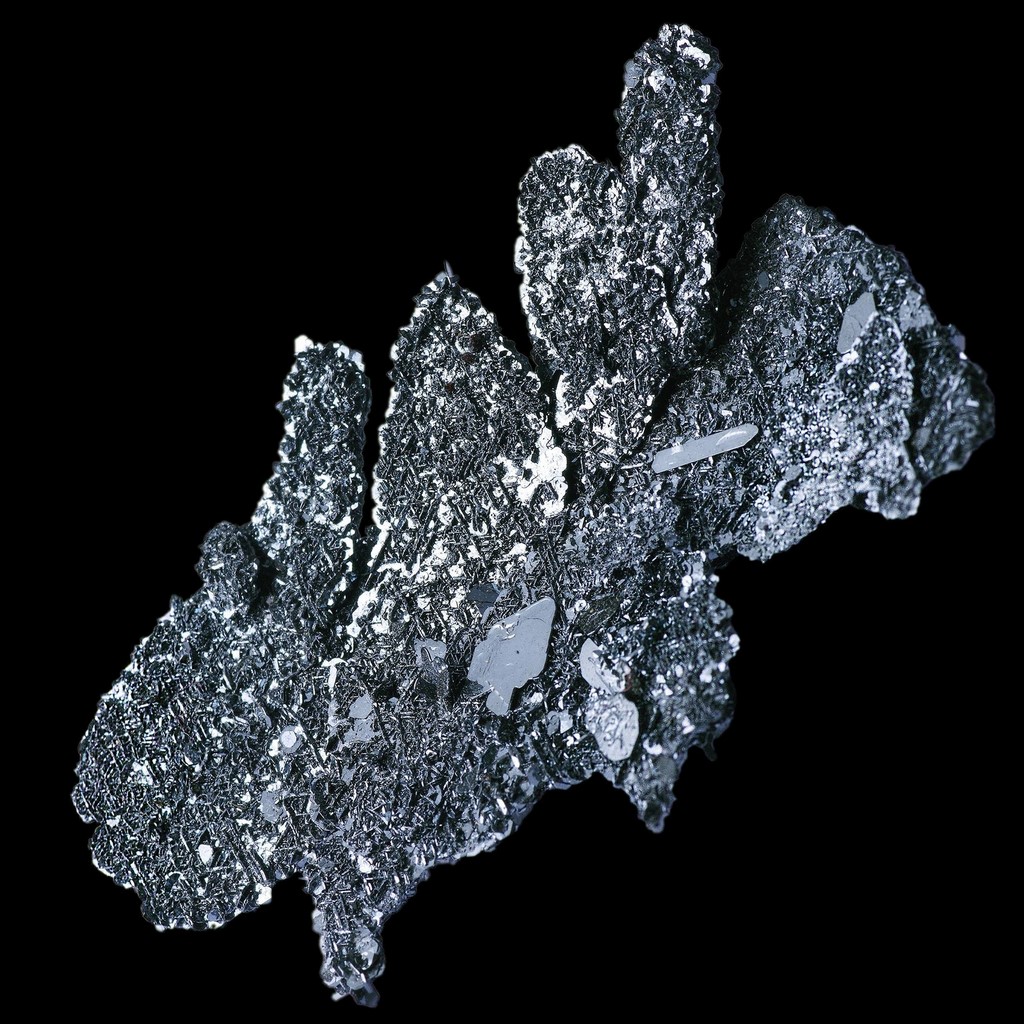 France has beautiful small deposits that provided superb crystallizations. We can note especially very bright lamellar crystals (photo in margin) and sometimes dendritic from Auvergne volcanic massifs (Chaîne des Puys and Massif du Mont-Dore), some reaching up to 10 cm ! The Vosges also produced beautiful tiny shiny crystals whether as Stahlberg at Bréouzard or in Framont.

The hematite twins are extremely rare... We can note twinned crystals from South African deposits as N.Chwaning II Mine. Large twinned hematite crystal can be associated with ettringite.

A particular shape is to be noted is the epitaxial growth of rutile on hematite crystals. These can form true 6 pointed stars highly sought by mineral collectors. Hematite in these stars is not twinned unlike sometimes rutile crystals (photo in margin). The best epitaxies occur on deposits of Bahia in Brazil. 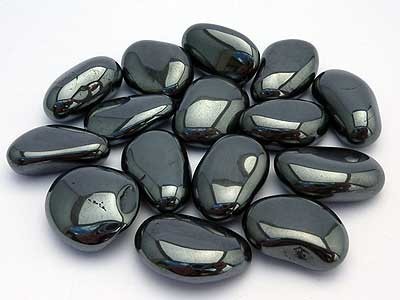 A major scam exists around hematite and floods the market today. Indeed, there are hematite at all mineral shows : tumbled stones (photo in margin) or costume jewelry (photo below). You should know that although sold as hematite, many of these objects are not hematite, and absolutely do not contain hematite ! It is often in reality an industrial material made from ceramic and ferrite, it is sometimes called "hematine" and is designed to make magnets... You can easily recognize the fake hematites because they are attracted by a magnet while natural hematites are not. 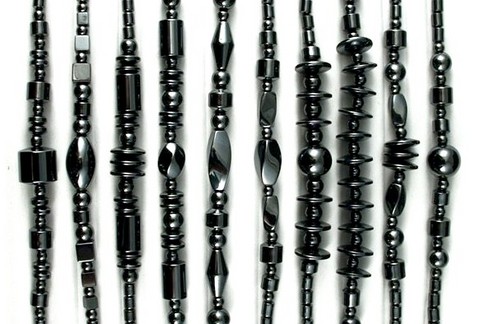