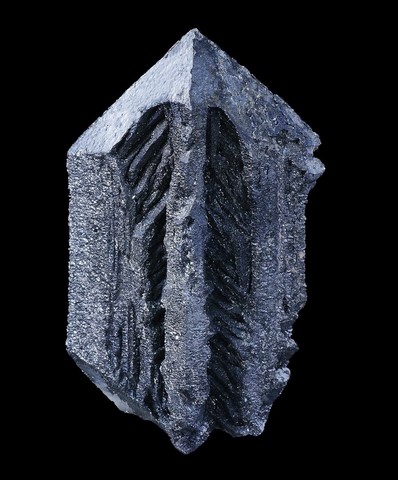 Magnetite belongs to the group of spinels of which it is the principal representative. Two origins are proposed for the etymology of magnetite. One comes from Magnesia in Thessaly (Greece), where natural magnets were known since ancient times and called "magnets" by the Greeks, notably Thales of Miletus (625-547 BC) ; another comes from Pliny the Elder in 77 who would have named this mineral according to the shepherd of the legend, Magnes, who would have discovered the natural magnets of Mount Ida by leading there to graze his flock. It is common in many types of rocks and metal concentrations. In basic magmatic rocks, magnetite can form magmatic segregation of gigantic accumulations ; the case is rarer in acidic rocks. It is generally a common mineral of skarns, metamorphic rocks of greenschist facies (including alpine fissures), and metamorphosed sedimentary iron deposits. It is also an accessory mineral of volcanic fumaroles. It is more rare in sedimentary environments except in placers where it is easily encountered thanks to its near-unalterability. Magnetite can be massive but is most often in octahedral crystals more rarely rhombododecahedral or cubic, black. It is a strongly magnetic mineral, which constitutes a determining characteristic of identification. Magnetite is the main iron ore and is actively mined in many mines around the world. Magnetite is also used for the treatment of other ores : finely ground into aqueous suspensions, it provides a dense medium used in mineral separation processes. Historically, it has obviously also been used as a natural magnet, especially in ship compasses. 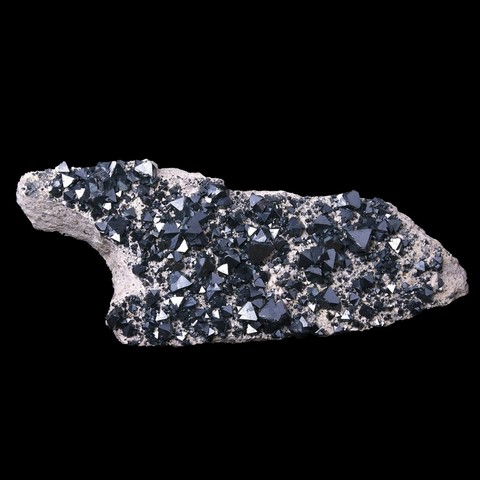 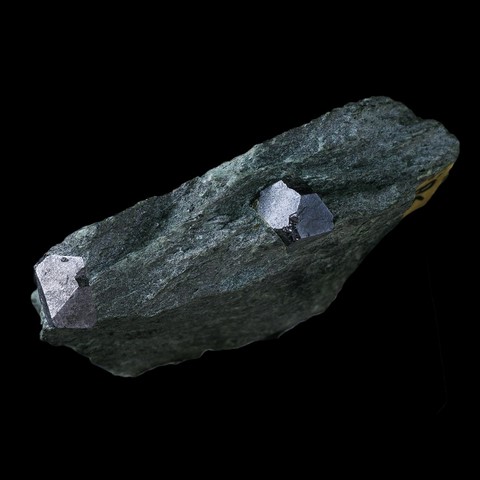 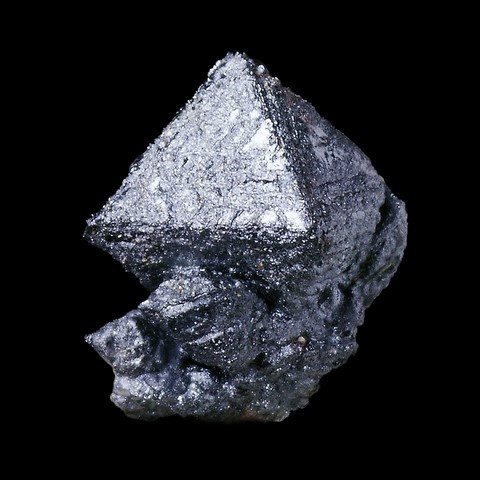 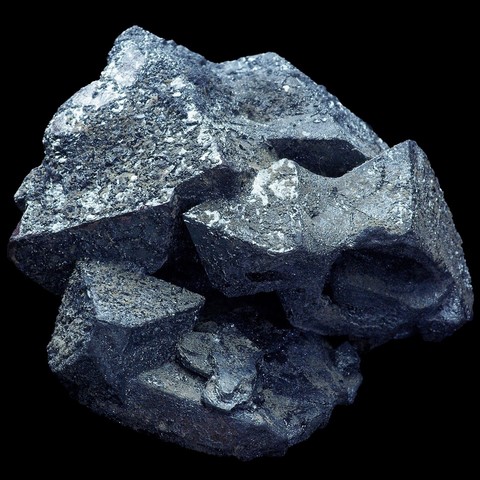 Magnetite in the World

The largest crystals in the world come from Faraday (Bancroft, Ontario) and pegmatites from Tete (Mozambique), they weigh up to 250 kg for edges sometimes greater than 50 cm ! Localities that have produced superb samples are numerous in the world. We can particularly mention the 15 cm octahedral or rhombic dodecahedral crystals from Traversella (Piedmont, Italy), the perfect and glossy octahedra with 15 mm edge of the Binn alpine fissures (Switzerland), or the 7 cm rhombohedrons associated with palygorskite from Alpine fissures of the Unteren Rifflekies, Stubachtal, Austria ; the magnetite crystals of Kirunavaara (Sweden). The fumaroles of the Payún Matru volcano in Argentina also deposited magnificent skeletal hematite crystals more than 10 cm (main photo) pseudomorph after magnetite (transformation called martite).

In France, magnetite is present on volcanoes of the Massif Central and systematically of fumarolic origin and hematite pseudomorph (martite). It is found in particular at Puy de la Tache and Roc du Cuzeau (Mont Dore Massif) but also in the scoria quarries of the Chaîne des Puys including Puy de Tunisset, where crystals up to 3 cm were discovered in 2010.

Simple twinning are common on {111}, both a twin and a conjoined plane (spinel twinning presented in the right picture) ; but also lamellar producing streaks on {111}. The samples presenting this well defined and clean twinned crystals are rare.

It should also be noted that magnetite can turn into hematite after crystallization (pseudomorph) so we speak of martite, most of the time the martites are of fumarolic origin. The inverse transformation of hematite to magnetite is much rarer, so called "muschketovite" samples. 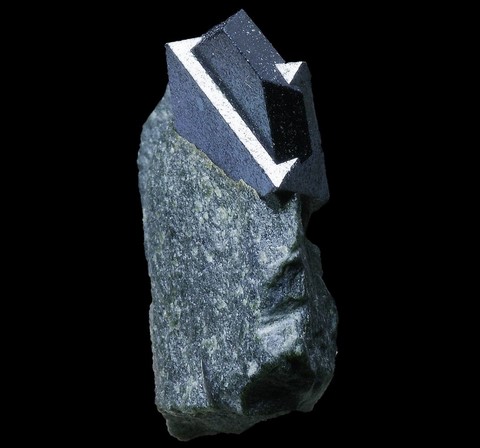 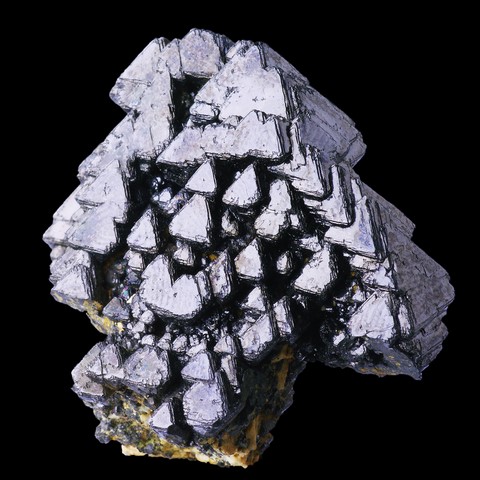 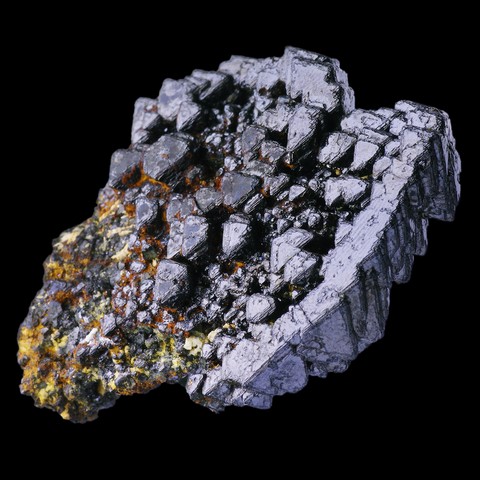 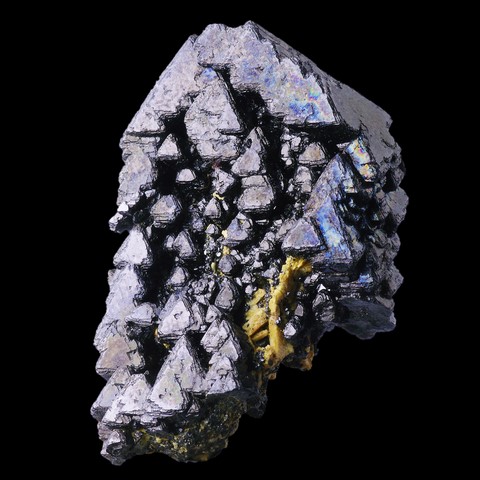 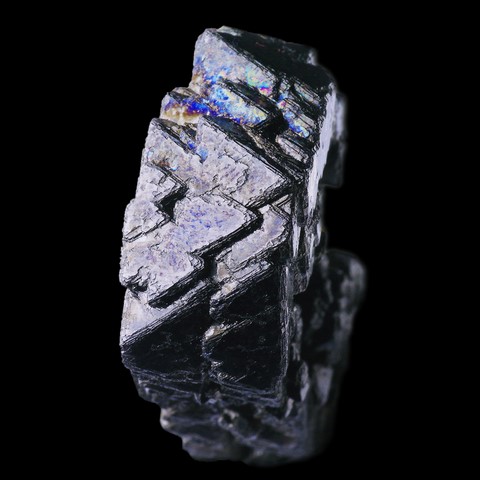 Magnetite is enormously trafficked, especially in the world of lithotherapy and esotericism. Faced with an ever growing demand for care and well-being items, we have seen in the years 2000-2010 many objects and tumbled stones sold under the name of magnetite but that are not. It's objects are actually waste magnets, a mixture of ferrite and resin whose magnetism has been induced with an electromagnet... These objects can be metallic gray but also iridescent (surface treatment by sublimation of titanium).