What is a magma in geology ? 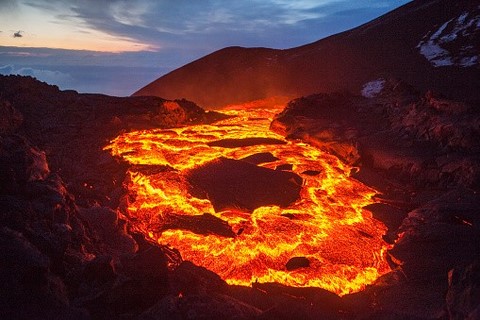 A magma is a mixture of molten rock and gases, the temperature of which varies approximately between 800°C and 1200°C (exceptionally 500°C for carbonatites and 1600°C for komatiites). Magma can be completely liquid or contain suspended crystals and it is rich in dissolved gases. By cooling, a magma will solidify and give birth to magmatic rocks : volcanic rocks which solidify rapidly on the surface, and plutonic rocks which slowly crystallize in depth and thereby acquire a coarser grain.
This liquid state is an exception in the Earth whose interior is essentially solid, except for the outer core of the planet. For liquids to form, therefore, special geological conditions are required. Most of the time, the fusion is generated by the hydration of mantle peridotites or by their decompression (either via their rise to the surface, or by the thinning of the overlying lithosphere). These conditions are met in particular geological sites : rifts (ridges, Iceland, East African rift), subduction zones (Andes, Indonesia, Japan, etc...), sometimes in the heart of the plates under the effect of "hot spots" (Hawaii, Reunion, Yellowstone, etc...) and more rarely in collision zones (Mont Ararat).
Back to summary