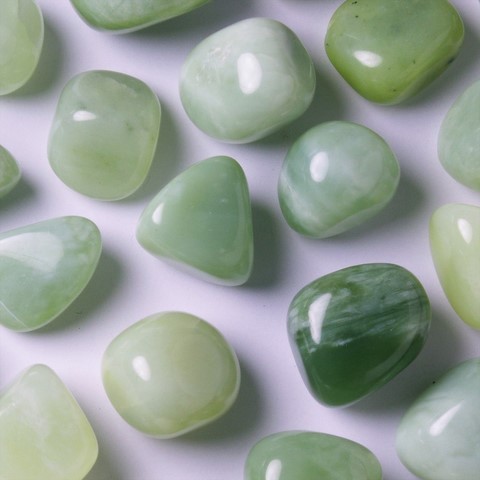 The term "jade" is normally exclusively reserved for nephrite and jadeite. However many other materials are called "jade" often in order to maintain a blur and facilitate their sales... Decryption :

Black nephrite jade : a generic term referring to all black or almost black nephrite jade, which is usually caused by microscopic inclusions of dark minerals, mainly graphite.
Hetian Jade : one of the classic Chinese jades. It consists almost entirely of tremolite, but can contain up to 5% by weight of impurities such as diopside, epidote, clinozoisite, olivine, dolomite, quartz, magnetite, pyrite, apatite, limonite and carbonaceous matter.
Kunlun Jade : one of the classic Chinese jades, also known as "Qinghai Jade". It consists of actinolite and tremolite in varying proportions, and generally also contains minor wollastonite. The most precious specimens have green-white patterns.
Lantian Jade : a variety of tremolite (white jade), which varies in color from white to yellow, gray, pale blue and light green. The colors are due to the inclusions of iron oxides (yellow), graphite (gray) and chlorite, epidote or minerals of the serpentine group (pale blue).
Manasi Jade : a green jade which consists mainly of tremolite with only minor actinolite. The green color is caused by microscopic inclusions of green silicates, mainly chlorite and minerals from the serpentine group, and it also frequently contains diopsides and grossulars.
Meiling Jade : a typical tremolite jade, in a variety of colors from white to gray. The white varieties are the most precious.
Tremolite Jade : a generic term, referring to all varieties of nephrite which consist mainly of tremolite. While all white jades are tremolite jades, not all tremolite jades are white.
Xiuyan Jade : a green jade, which contains both tremolite and actinolite in varying proportions. Some varieties may also contain antigorite (Zhang, 2002). One of the classic Chinese jades.

Fei cui jade : is the most popular variety of jade jadeite. Rarely also blue, lavender-purple, black, red or yellow, depending on the impurities.

These jades that are not...

Transvaal Jade : A compact variety similar to green grossular jade containing up to 25% zoisite. Often called "hydrogrossulaire", the water content may be due to the zoisite component rather than a real hydrogrenate.

Queensland Jade : is a natural green to yellow chrysoprase grown in Queensland, Australia.

California jade : is an idocrase (vesuvianite), extracted in the Butte County, near Chico, in California, it is a translucent yellow-green stone also called "californite", it is proposed as an alternative to jade.

African jade : is the other name for buddstone, a variety of fuschite and green serpentine from South Africa.