What is kimberlite in geology ? 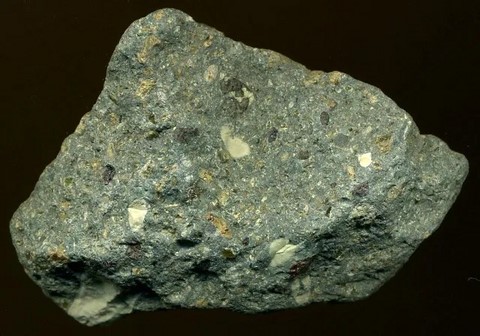 Kimberlite is an ultrabasic volcanic rock with a brecciated texture composed mainly of olivine (forsterite), bronzite and chromiferous diopside, serpentine, micas (biotite, phlogopite), chromiferous pyrope, oxides (pyrophanite, ilmenite) and various accessory minerals (chromite, perovskite, carbonates, etc...).
The kimberlites result from colossal volcanic eruptions linked to rising magmas produced at great depth and occupy vertical chimneys called "pipes" in the shape of an elongated cone and whose surface diameter can reach 2 km in diameter. They contain abundant fragments torn from the walls of the chimney or from deep areas (xenoliths), which sometimes contain diamonds. Some sources suggest speeds of supersonic ascent (more than 1200 km/h) of these magmas. Kimberlites and the alluvium derived from them are thus practically the only natural sources of diamonds.
Kimberlites are relatively young rocks : their age is mostly between 80 and 160 million years old (Cretaceous and Lower Jurassic), with a few exceptions such as the 1.2 billion years old kimberlite from the Premier mine in South Africa and which delivered the famous Cullinan diamond.
The name of kimberlite comes from the city of Kimberley, in South Africa, where these rocks were intensely mined for diamonds : the Kimberley "pipe", in relief at the beginning of the last century, thus became the "Big Hole", an impressive chasm dug over more than 1 km by man.
Back to summary