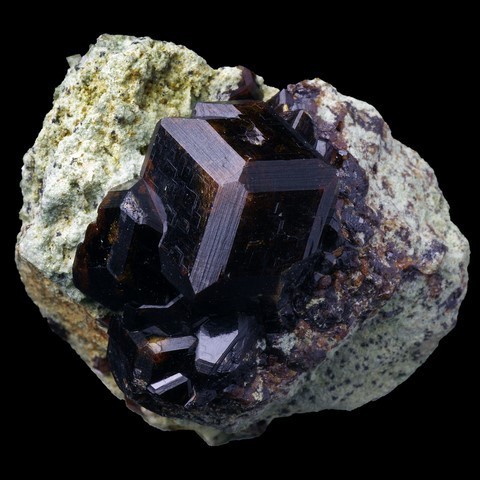 Garnets are a very important group of silicates. The minerals in this group share an identical structure that can integrate cations of varying sizes and valences, making it a very diverse and common group. Their structural formula is written A3B2(SiO4)3, where A and B respectively represent 8 coordination sites, occupied by large divalent cations (Ca2+, Mg2+, Fe2+ and Mn2+), and 6 coordination sites, occupied by trivalent cations of smaller sizes (Al3+, Fe3+, Cr3+). When site A is occupied by Ca2+, we speak of ugrandite or calcic garnets (acronym for Uvarovite, GRossularite, ANDratite, its 3 main representatives). When it is occupied by Mg2+, Fe2+ or Mn2+ we speak of pyralspite or aluminous garnets (acronym of PYRope, ALmandine, SPessartite). This group owes its name to the ancient French pome grenate (pomegranate), itself derived from the Latin malum granatum (grain apple) designating the pomegranate fruit because of its resemblance to its grains. It was named so around 1250 by the German philosopher Albert the Great (1200-1280). 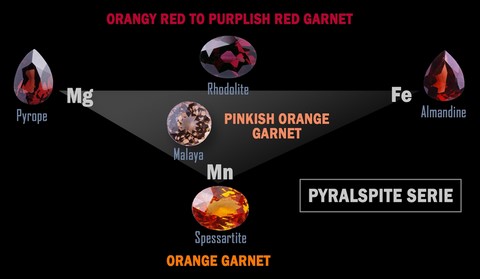 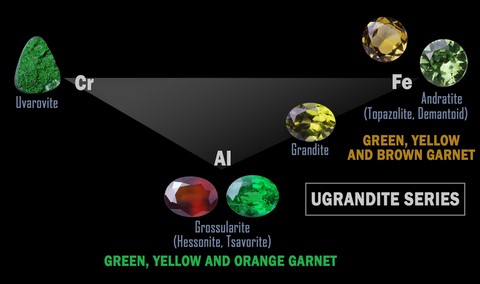 Almandine and pyrope are the most common garnets. There are extensive solid solutions within each of the two groups of garnets and it is rare to find pure terms. On the other hand, solid solutions between ugrandite and pyralspite are very limited.
Some rare substitutions give rise to the formation of garnet varieties : melanite (variety of andratite) results from the replacement of a portion of Fe2+ by Ti4+ and a little Ca by Na in the A sites. Hydrogrossular contains up to 8.5% water in the form of (OH)4 groups. These groups are assumed to replace SiO4 tetrahedra with substitutions of Si4+ by 4H+.
Garnets form characteristic crystals, globular, isometric, most often trapezoedra or dodecahedra up to several decimeters. Their colors are variable : rarely red, rather reddish-brown, brown, pink, black, and sometimes green (demantoid is a chromium variety of andratite, tsavorite a chromium and vanadium variety, and the ouvarovite). Highly resistant to weathering, they can form true alluvial or littoral placers.
Garnets are very common minerals widely present in metamorphic rocks (mica-shists, amphibolites, pyroxenites, gneisses, anatexites) but also in magmatic rocks. These are valuable indicators of degree of metamorphism.
Pyrope : it is the garnet of the ultrabasic rocks (peridotites, kimberlites), and serpentinites which derive from it. It is then associated with olivines and pyroxenes. It is also the garnet of eclogites, rock formed at very high pressure and where its chemical composition varies in the latter from pyrope to almandine.
Almandine : it is the garnet of the metamorphic rocks. It is a mineral derived from the regional metamorphism of clay sediments that is formed from chlorites or micas depending on the degree of metamorphism. Pure almandine is typical of granulite facies. It is also present in contact or thermal metamorphic aureoles with muscovite and potassium feldspar. It is also an accessory mineral of some aluminous pegmatites. It is found in abundance in alluvium.
Spessartite : is the manganiferous garnet typical of skarns and assemblages rich in manganese, in which it coexists frequently with rhodonite and pyroxmangitis. It is also an accessory mineral of some leucogranites and granitic pegmatites. 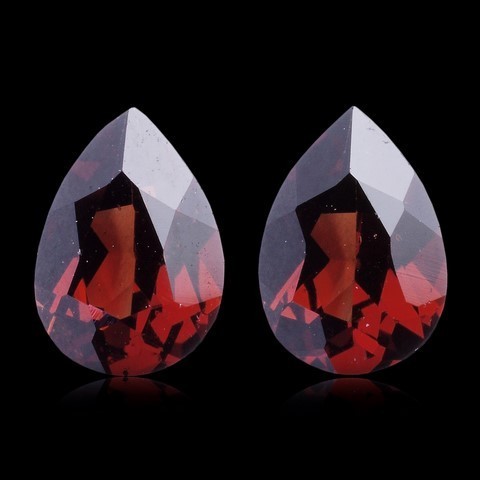 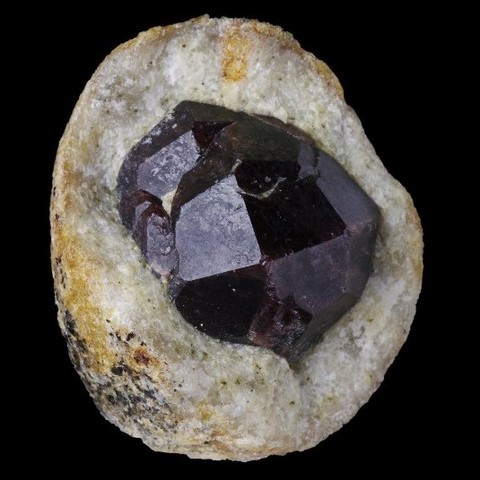 Almandine trapezoedron within granitoid from Madagascar 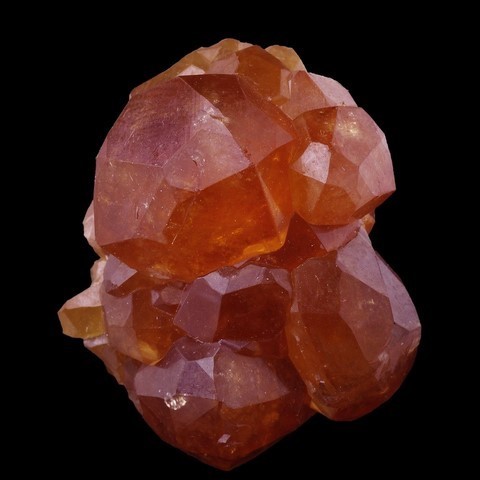 Spessartite  trapezoedra from Marienfluss, Epupa, Namibia
Grossularite and andratite : are the typical garnets of regional metamorphism or contact of impure limestones (rich in Mg, Fe, Al, Mn, V, etc ...). Two exceptions however : melanite, a black variety of andratite, is a mineral of some igneous alkaline rocks, and the demantoid, a very rare chromiferous variety of andratite, of a superb green, is formed in the serpentinites.
Uvarovite : it is the rarest of the "common" garnet, of a very beautiful emerald green color, it is formed during the hydrothermal alteration of chromite serpentinites, or during the contact metamorphism exerted by ultrabasic rocks mineralized in chromite on limestone or dolomitic rocks. His most famous site is Outokumpu in Finland.

91,07 ct uvarovite from Saranovskii mine, Russia 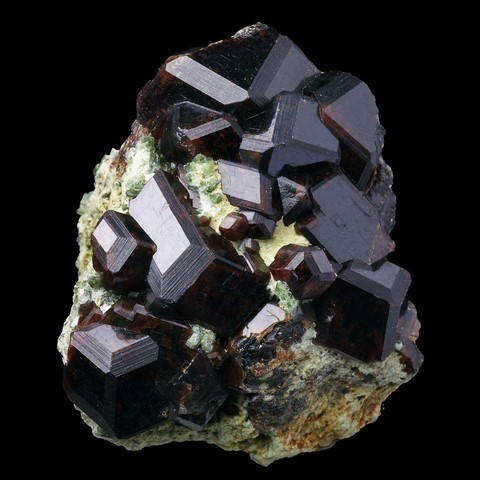 Grossularite from Fushan Mine, She Co., Handan, Hebei, China 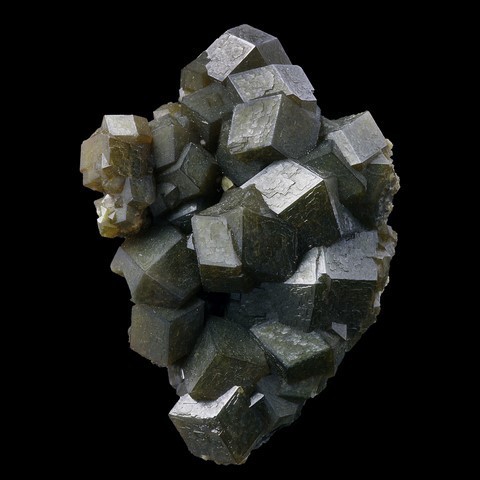 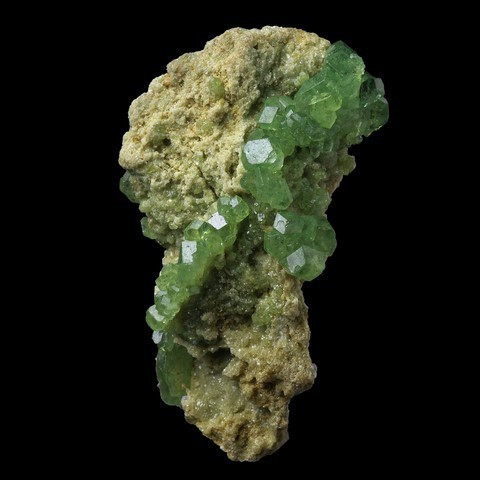 Demantoid (andratite) from Antetezambato, Madagascar
The well-formed garnet crystals are sought after by collectors. Garnets frequently feature gemstones sought after for jewelery. The "carbuncle", the bohemian garnet in vogue in the Middle Ages is a pyrope, the hessonite is a grossular, and the most sought after is the demantoid, transparent green, an andratite. The almandine gem is etracted in some localities of India and Sri Lanka. Garnet, on the other hand, is essentially stony and worthless in jewelery. Its hardness (6.5 to 7.5), however, makes it a quality abrasive, sometimes used for the development of special abrasive paper ("garnet paper") in Gore Mountain in the state of New York especially. The pyrope has a high hardness, a good conductivity and a certain elasticity, which is worth it to be used as bearings in the precision mechanics like the watches.

Garnet in the World

Garnet is so abundant throughout the world in developed crystals that it is impossible to make an exhaustive list of its most beautiful localities... We can quote by species :
Pyrope : the best occurrences of the pyrope gemmy varieties are in Czech Bohemia, where the crystals, which sometimes reach the size of a chicken egg, come mainly from kimberlite and alluvium derived from it (Trebenice, Merunice, Krems...). Zambia and Tanzania also provide beautiful "color-change" gemstones from red to blue-green with sometimes net asterism, as well as India (Sittampundi). The largest crystals whose composition approaches the pure magnesium pole, are trapezohedra from Parigi in Italian Piedmont.
Almandine : the most important almandine gemstones come from India, especially the regions of Jaipur in Rajasthan, Hyderabad, Pallavaram, where they are extracted since ancient times. Gemstones are also mined in Zimbabwe (Miami), Tanzania (Namaputa and Nambunju) and Sri Lanka. Giant almandines are known in Selvik, Norway (in metric size), in Madagascar pegmatites (trapezohedra of 50 cm in diameter) and in several deposits in eastern America : Gore Mountain (New York with its 50 cm crystals), Stony Creek (North Carolina and its 30 cm crystals), Little Pine (North Carolina and its perfect 10 cm crystals), Russel (Massachussets) or Topsham (Maine) and its stunning 25 cm crystals. In Europe, the most beautiful crystals are undeniably those of the Austrian Tyrol (Zillertal, Granatenwan, Seeberalpe), where the sometimes translucent crystals reach 5 cm.
Spessartite : the mines of the pegmatitic district of Ramona, California, provided superb combinations of spessatite, schorl and smoky quartz. Beautiful crystals come from the Pakistani district of Gilgit-Skardu where pegmatites contain translucent crystals measuring up to 10 cm. The Brazilian pegmatites of Corrego do Urucum (Minas Gerais) have produced hemispherical gemstones which are perhaps the most beautiful specimens in the world. Chinese pegmatites from Wushan Spessartine Mine (Tongbei) also produced bright orange crystals on smoky quartz. More recently, Tanzania (Loliondo, near Serengeti National Park) has produced magnificent crystals of almost 10 cm. In a different context, the Broken-Hill metamorphic deposit in Australia yielded red dodecahedra up to 10 cm included in galena. Crystals of gemmy spessartine, orange in color have been exploited at Ratnaura (Sri Lanka) and Madagascar (Mount Ibity). The pegmatites of Virginia and Pennsylvania (Rutherford) have provided 10 cm crystals weighing up to 1 kg !
Grossularite : the largest known grossular crystals are Mexicans. White to pink dodecahedra exceeding 10 cm have been extracted from Jaloxtoc (Morelos) and Lake Jaco (Coahuila). Numerous deposits providing high quality crystals exist in the United States, particularly in Maine, where the Sanford deposit provided superb 5 cm red crystals and Minot's 12 cm crystals. Tsavorite (a vanadiferous variety) was discovered in exceptional emerald green crystals near Arusha (Tanzania), sometimes associated with tanzanite, and in good crystals in Voi (Kenya). Hessonite is known in superb samples in the Italian Piedmont (Val d'Ala, Val de Susa...), with clinochlore and translucent green diopside. But the best crystals come from the Jeffrey Mine (Quebec, Canada) which supplied orange-brown to brownish gemstones of 3 cm. Hessonites from Sri Lanka are actively sought for jewelery.
Andratite : the most beautiful crystals come from the Franklin and Sterling Hill (New Jersey) American deposits, where the dark red dodecahedra reach 13 cm. Large dodecahedra come from Arendal (Norway), Alaska (7 cm crystals at the Jumbo mine) and Namaqualand (South Africa). Among the gemmy varieties, the demantoids of Val Malenco (Italy) and the Urals are particularly famous as well as those discovered with topazolites in 2009 in Ambanja in northern Madagascar (up to 2 cm).
Uvarovite : the most beautiful specimens of uvarovite come from the region of Bisersk (Russian Urals) with its 7 mm gemmy crystals but also from the Outokumpu copper mine in Finland. The latter yielded dull rhombododecahedra up to 3 cm, the largest known. This rare garnet is also present in excellent crystals in Quebec mines (Magog and Thetford Mines) and in several chromite deposits in Turkey (Kop Krom), California (Redlodge) and Oregon (Riddle).

Garnet is very abundant in the French undergound, so it is impossible to make an exhaustive list of all its localities... We can quote by species :
Pyrope : it is found in garnet peridotites, however their outcrops are rare in France...
Almandine : the best French crystals come from micashists Collobrières (Var) and good translucent crystals of a deep red and up to 3 cm are common in the corneans of Plélauff (Côtes d'Armor).
Spessartite : it is known in the pegmatites of Limousin (Chanteloube, Crozant).
Grossularite : Raon l'Etape deposit (Vosges) provided excellent crystals of grossular, exceeding 6 cm. We find the grossular in the Hautes-Pyrenees at Pic d'Arbizon, Haute-Garonne Luchon and Roc d'Encledoux Ariège.
Andratite : it is known in France in beautiful crystals especially in skarns in Diélette (Manche), Kerdu near Perros-Guirec (Côtes d'Armor), Costabonne (Pyrenees). Fumerollian andratite was discovered in the Massif Central (Menet, Cantal).
Uvarovite : not present in the French underground.

Twinning appear to be observable only with the polarizing microscope, the examination of thin sections then shows, especially in the calcium garnets, complex twinning ; the most common is a polysynthetic twinning having {510} as a twin plane.

Almandines or rhodolites may exhibit asterism due to oriented inclusions of rutile needles. Four-rayed stars are common, but some stones show six rays, or even a combination of four and six rays in the same stone. The star garnets come from India (right), Sri Lanka and Idaho (USA). 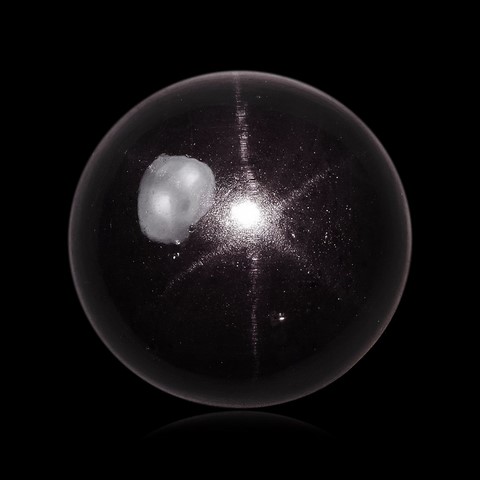 Yttrium garnet (YAG), of formula Y3Al2(AlO4)3, and gadolinium-gallium garnet (GGG) of formula Gd3Ga5O12 have been used as synthetic gemtones because of their rather high refractive indices. YAG and GGG were used as imitation of diamond in the 1960s until more realistic imitation production methods in commercial quantities were developed (CZ production). YAGs can also mimic the most valuable green garnets...
With regard to the mineralogical samples, gluings and assemblages can be practiced especially on the specimens of the Pakistani pegmatites (with topaz, pink apatite, fluorite, aquamarine, etc...).

TP : Opaque to transparent
IR : 1.72 to 1.94
Birefringence : 0
Optical character : None
Pleochroism : None
Fluorescence : None