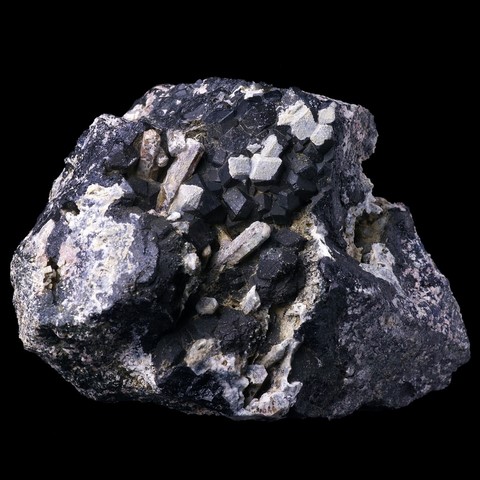 Nepheline is a common feldspathoid which is found preferentially in nepheline syenites, where it is sometimes mined as an aluminum ore, and in certain silica-poor lavas : calc-alkaline phonolites (with sanidine and plagioclases) and alkaline phonolites (with anorthosite). Its name comes from the Greek nephelê (cloud), because it develops a cloudy appearance when immersed in strong acids. Transparent to translucent, nepheline is of various colors : greyish white, grey, greenish, greyish yellow, often brownish. It most often forms xenomorphic grains, with a greasy luster ("elaeolite" variety of the old authors), sometimes pluricentimetric, as in the nepheline syenites. Its free crystals are rare : they are hexagonal primes ending in a flat face. Hypogenic transformation of nepheline into cancrinite or zeolite is not uncommon. Sensitive to atmospheric alteration, it disintegrates easily at outcrops, inducing, in tropical climates, the formation of bauxite.

Nepheline in the World

Superb colorless and transparent tabular crystals 15 mm in diameter, among the best in the world, and remarkable groups of elongated crystals, which can individually reach 35 mm come from Vesuvius and Mount Somma (Campania, Italy) and the Alban Mountains, notably Cabo di Bove, near Rome (Lazio). The largest known crystals come from the Bancroft region (Ontario, Canada) : they are stony hexagonal crystals of greyish color, exceeding 15 cm, embedded in calcite. Among the deposits that have provided quality crystals, let us also mention Natural Bridge (New York), Incarnacion (Jalisco, Mexico), and Katzenbuckel, near Heidelberg (Saxony, Germany). Geodes from the nepheline syenite massifs of Mont St-Hilaire (Quebec) and the Kola Peninsula (Russia) also provided good crystals.

In France, nepheline is present in very small crystals in the geodes of the phonolite of Puy Griou (Cantal), and in the nepheline syenite of Fitou, in the Pyrenees.