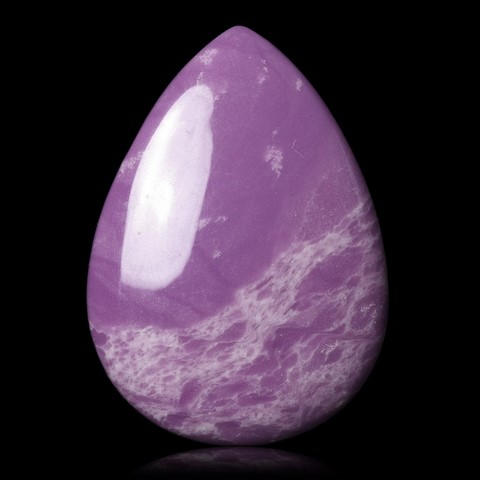 Phosphosiderite is a secondary phosphate of granitic pegmatites, more rarely a component of soils. It is the dimorph of strengite and probably forms a complete series with metavariscite. It owes its name to its chemical composition : phosphorus and iron (sideros in Greek). Phosphosiderite comes from the alteration of primary phosphates such as triphylite or lithiophyllite and usually accompanies other secondary phosphates (heterosite, leucophosphite, etc...). It forms tabular crystals with squat prismatic, more frequently encrustations or botryoidal masses with fibrous textures. The mineral is variable in color but often striking : purple, blue-violet to carmine red and pink, sometimes pinkish-orange or greenish, rarely colorless. It is a mineral that is cut into cabochons for jewelry, and used as an ornamental stone.

The most beautiful specimens come from the Bull Moose pegmatite, near Custer (South Dakota) : they are purple crystals up to 2.5 cm. But phosphosiderite is also present in the majority of the famous American phosphate pegmatites of South Dakota, New Hampshire and California. The pegmatites of Hagendorf and Kreuzberg, near Pleystein (Bavaria, Germany) gave spectacular groups of purplish crystals, as did the Brazilian pegmatites of the district of Galileia, in Minas Gerais. This mineral is also found in other large fields of phosphate pegmatites, notably in Mozambique (Muiâne) and Portugal (Mangualde).