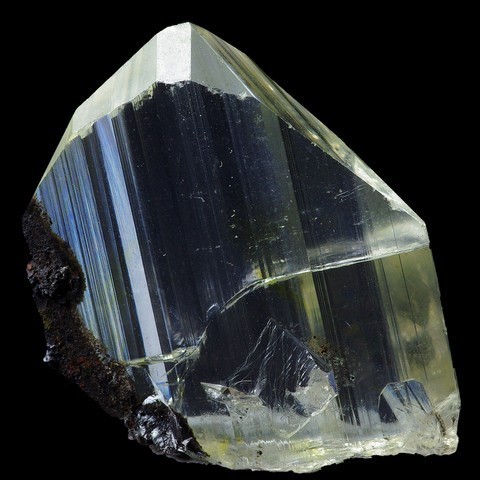 Anglesite is a secondary mineral in the oxidation zone of lead deposits that forms under acidic conditions. When the environment becomes basic, it disappears in favor of cerussite. It is formed by alteration of the galena which can subsist in the middle of the masses, the anglesite is associated with other oxidized minerals of lead and zinc (smithsonite, cerussite, hemimorphite) and sulphides (galena, sphalerite, etc...). Anglesite owes its name to its place of discovery, the island of Anglesey in Great-Britain. The crystals are generally thick to elongated but very rarely acicular, reminiscent of those of barite, they are frequently tabular and flattened according to the cleavage. Anglesite is also massive, concremented, stalactitic or nodular. It has a high density greater than 6.3, it is transparent to translucent to adamantine luster, almost metallic. It can be colorless, greyish-white, sometimes tinged with yellow, green, blue, it can be black due to inclusions of galena. It is a highly sought after mineral, gemmy and well-formed crystals are not common, crystallized specimens are sought after by mineral collectors. It may constitute an accessory ore of lead, in some Cevennes deposits especially (Le Bleymard, Saint-Felix-de-Pallières).

Anglesite in the World

The best known crystals come from Touissit in Morocco (main photo), where they display a gray-yellow, sulfur yellow or yellow-orange hue ; sometimes gemmy, the 10 cm crystals are not uncommon (with a record specimen of 80 cm). Beautiful, similar crystals come from Tsumeb (Namibia). The Sardinian Italian Monteponi deposit yielded green centimetric crystals and large white crystals of the same facies as barite. Among the many other deposits to have provided quality crystals, we can mention the Tunisian cottage of Sidi Armor Ben Salem from which UHF were extracted as well as that of Wheatley (Pennsylvania) with its colorless crystals of 12 cm.

No known twin for this mineral species.