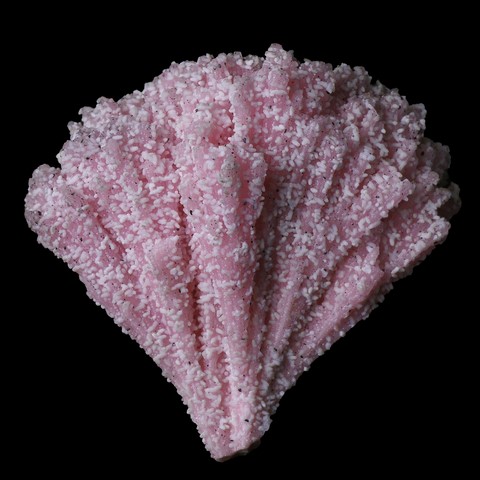 Kutnahorite (or kutnohorite) is a rare carbonate which was first described in the Czech Republic at Kutna Hora by the mineralogist Bukovsky A. It is this type-locality that gave it its name. Colors vary from white to pink but it can also sometimes be yellow to brown. The crystals often occur in rounded granular masses, sometimes in fan, but rarely in single crystals. It is a hydrothermal mineral from low to medium temperature, it is often associated with other carbonates such as dolomite or ankerite with which it forms series. It is a mineral that is not used in any particular area, specimens are only for collection.

Kutnohorite in the World

The most famous locality is the Czech Republic, but the large zinciferous deposits of Franklin and Sterling Hill (New Jersey), Broken Hill (Australia), and the Mexican gold and silver deposit of Providencia (Zacatecas) have produced good specimens. Finally, it should be noted that the world's best specimens are from the Wessel Manganese Mine in South Africa, which supplied aggregates larger than 20 cm with crystals sometimes exceeding 5 cm in size.

Kutnohorite was reported at Saphoz in Haute-Saône, the largest Vosgian manganese deposit.

Kutnohorite has no twinned crystals known.