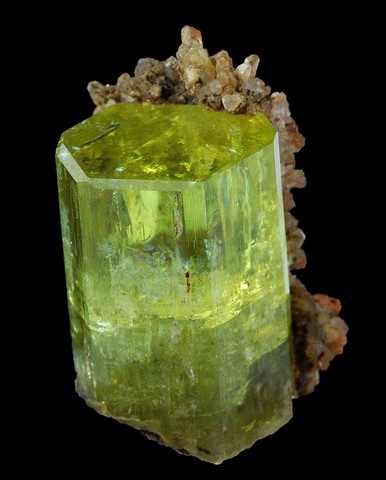 The apatite was a mineral for a long time, but the multiple subtitutions between elements make its chemistry so variable that the apatite is today considered as a group, the most important and the most abundant group of phosphates. The different minerals are named according to the predominant anion : OH (hydroxylapatite), F (fluorapatite) or Cl (chlorapatite), and depending on the possible partial subtitution of the (PO4) groups by (CO3F) or (CO3OH) groups,  then forming carbonate-apatites (respectively carbonate-fluorapatite and carbonate hydroxylapatite). In addition, because of the possibilities of substitution between P, As and V, there are possibilities of solid solutions extended in the apatite. It owes its name to the Greek apatan (deceive) because it is often confused with other minerals of similar appearance (emerald, olivine, tourmaline). The apatites usually present as short or elongated prismatic crystals, of hexagonal habit, in tabular crystals sometimes flattened or even acicular or in crystalline masses sometimes concretized or oolitic. Their colors vary enormously, ranging from colorless to green, blue-green, purple, sometimes yellow, brown, pink, etc... The risk of confusion with beryl is quite high, it is however significantly harder. Apatite is ubisquist, present in almost all types of rock : plutonic, sedimentary, metamorphic in particular in some pegmatites and marbles where the crystals can reach large dimensions. It is particularly abundant in alkaline rocks (nepheline syenites and carbonatites) and common in high temperature hydrothermal veins. Apatite is the almost exclusive source of phosphorus, which is the basis of the manufacturing process for phosphate fertilizers, detergents and certain animal foods. Apatite gems are also much cut for jewelery. 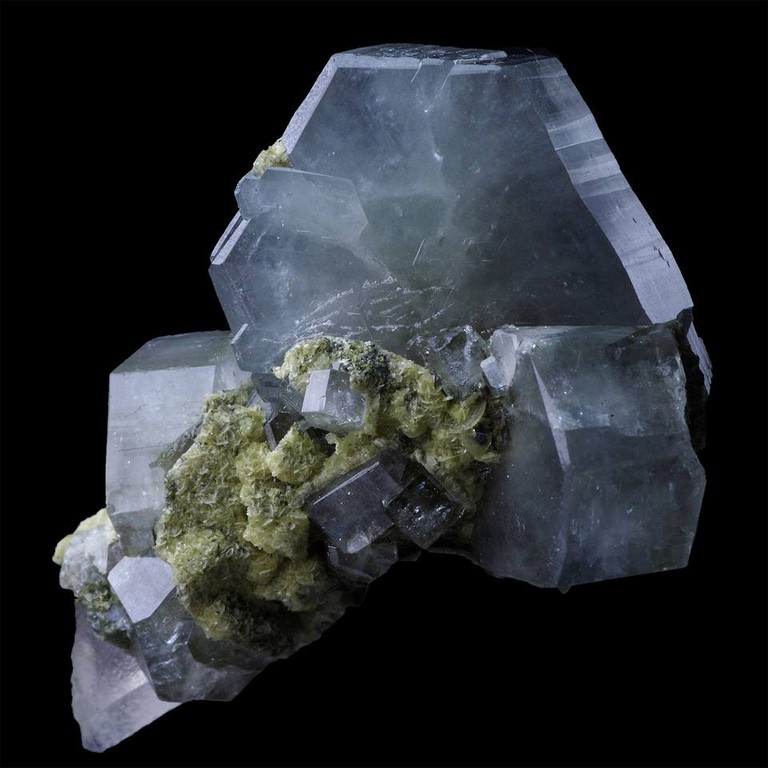 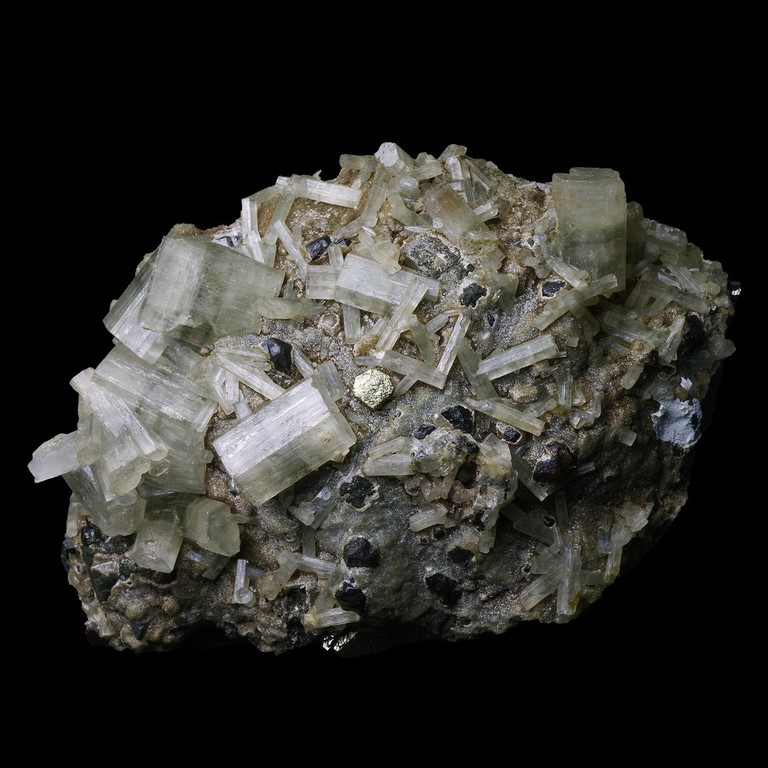 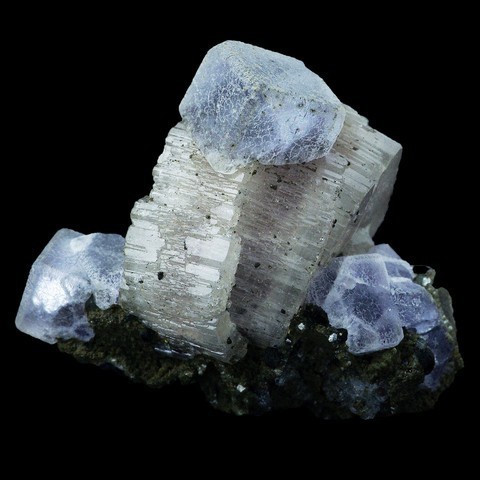 Fluorapatite  and fluorite from Panasqueira, Portugal 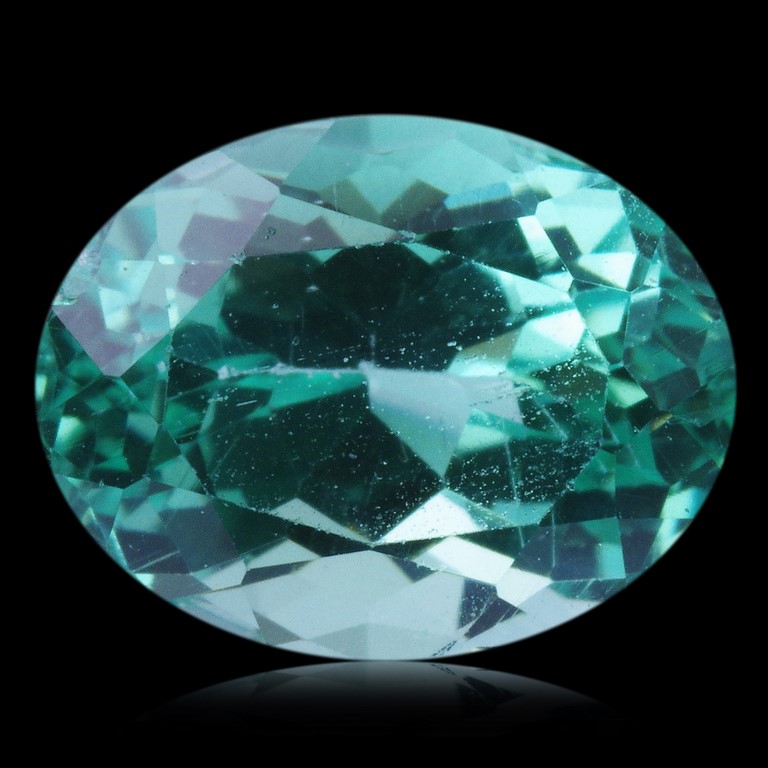 Apatite in the World

Fluorapatite : quality and large crystals are numerous. The largest crystals come from the Ontario and Quebec marbles, where individual crystals, generally dark green in color, reach 50 cm and make up aggregates exceeding 200 kg. Minas Gerais (Brazil) provides beautifully colored crystals : an extraordinary pink reaching up to 5 cm in diameter at the Morro Velho gold mine ; olive to yellow-green of more than 10 cm at Fazenda Campo Lindo ; olive to gray-green of 20 cm in Zé Pinto. In the USA, in Maine, the Pulsifer (also called "Apatite Mount") and Newry quarries yielded beautiful purple hexagonal prisms of more than 5 cm in diameter. The tungsten mine of Panasqueira (Portugal) provides splendid crystals measuring up to 10 cm, colored in blue, green, yellow or purple. Cerro Del Mercado (Durango, Mexico) is famous for its abundant gold-yellow prismatic prisms. In the Alps, Habachtal (Austria) provides remarkable centimetric pink crystals. Also in Austria (province of Salzburg), the famous Knappenwand site gave beautiful, colorless crystals associated with epidote, and Mount Grossvenediger with large 10 cm white crystals. Finally, there are the famous purple crystals of the Saxon tungsten veins (Ehrenfriedersdorf), and the 10 cm blue crystals of the Mica pegmatites (South Africa).

Chlorapatite : it is found in white crystals of 5 cm in Snarum serpentinites (Norway), but also in Dashkezan (Azerbaijan). It is found anecdotally in microspherules in some meteorites.

Apatite in France
Fluorapatite : in France it is found in pink centimetric crystals at the Aiguille des Glaciers in the Alps. It is also present at the La Mure mine (Isère). Fluorapatite has also been discovered in very beautiful blue and green centimetric crystals in the pneumatolytic veins of the Armorican Massif (La Villeder, Menez Gouaillou, Tréguennec ...) and Limousin (Montebras).

Hydroxylapatite : in France it is reported at Davignac in Corrèze in centimetric white crystals.

Chlorapatite : it is only reported in meteorites whose point of fall is located on the French territory (Salles, Chassigny, St-Séverin).

No twin known for the species. So, apatite is present in exceptional concentration in phosphorites, layer of very thick marine sedimentary phosphates composed of cryptocrystalline apatite concretized or mammillated called collophane (or collophanite). These phosphorites are formed by the accumulation of skeletons of marine animals near the paleoshores. The deposits of Morocco are the most important in the world. Bones and teeth are composed for a large part of apatite, as well as kidney stones.

Many apatites gemstones especially in blue hues have undergone a thermal treatment (heating).