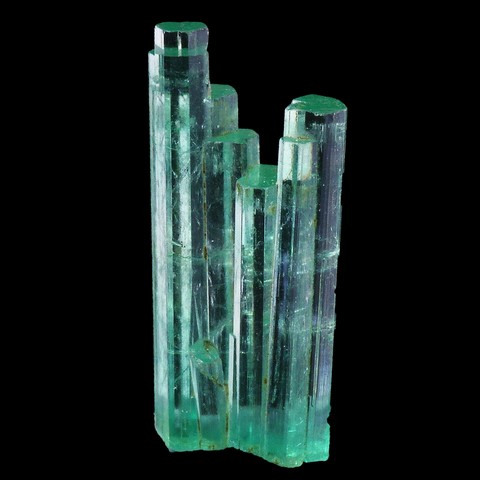 Emerald is a green variety of beryl, colored by chromium or vanadium, and this is the second gem in terms of value, behind the diamond. Its name comes from the ancient Greek "smaragdos" deformation of the Persian word "Zamarat" which means "heart of stone". It was already a currency exchange in ancient times and it was also widely exploited in Egypt in the Cleopatra's Mines (Jebel Zabarah) which provided only bad quality crystals. Beryllium, chromium and vanadium are uncommon chemical elements, which explains the rarity of the emerald in nature. Its environment of crystallization is very different from beryl, it occurs in micashistes with biotite in Urals or in hydrothermally altered limestone in Colombia (where it sometimes filled oldest fossils of snails cavities). It is always in association with ultrabasic rocks that provide chromium and vanadium. We can also highlight its very punctual presence in pegmatites where its quality is still poor. It gives mostly prismatic and elongated hexagonal crystals but rarely terminated. It is a mineral species only used in jewelery. 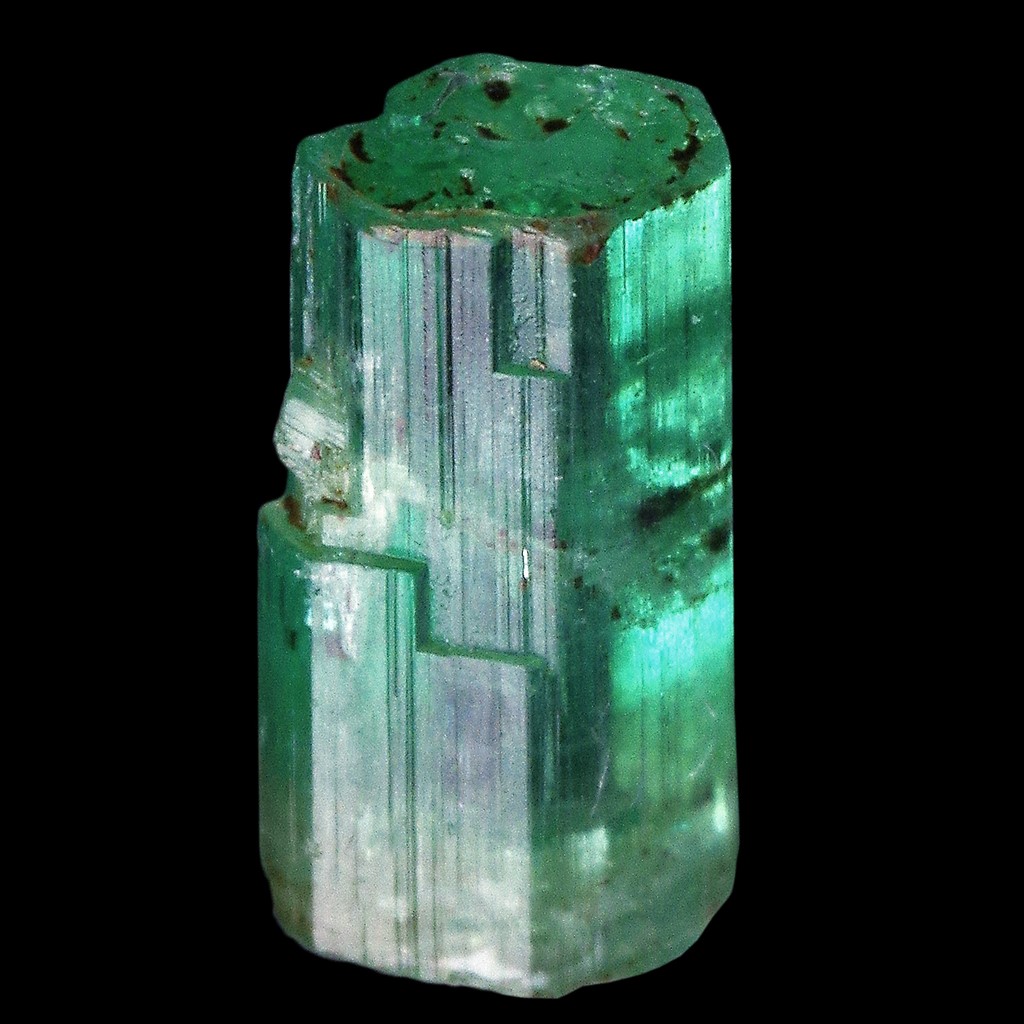 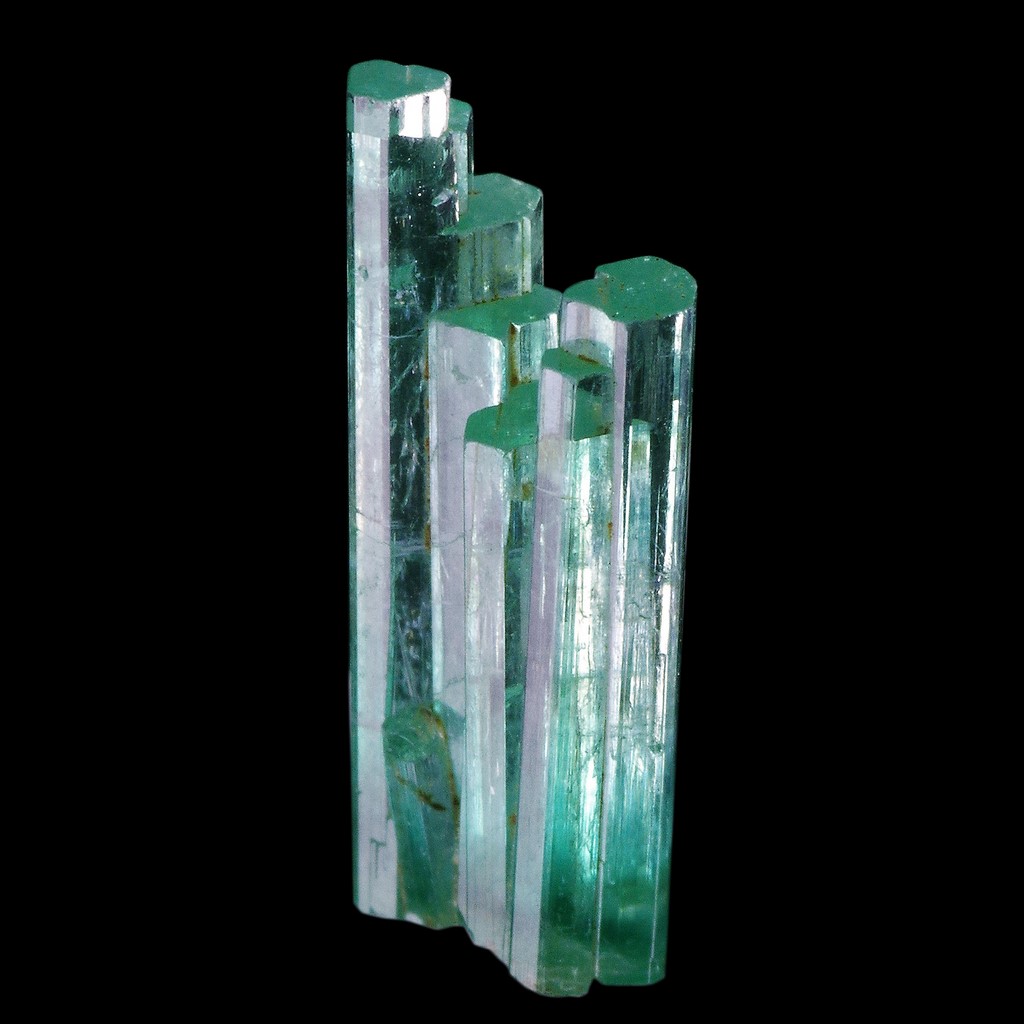 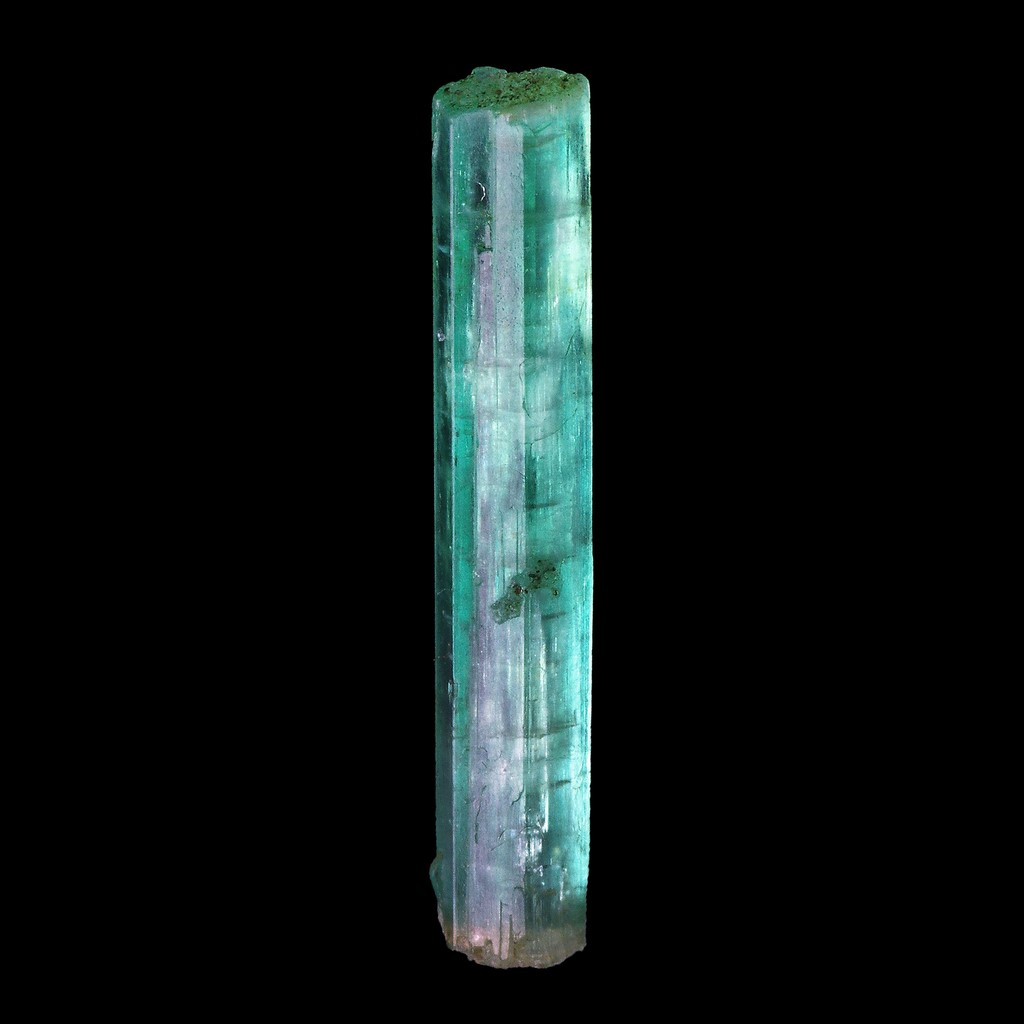 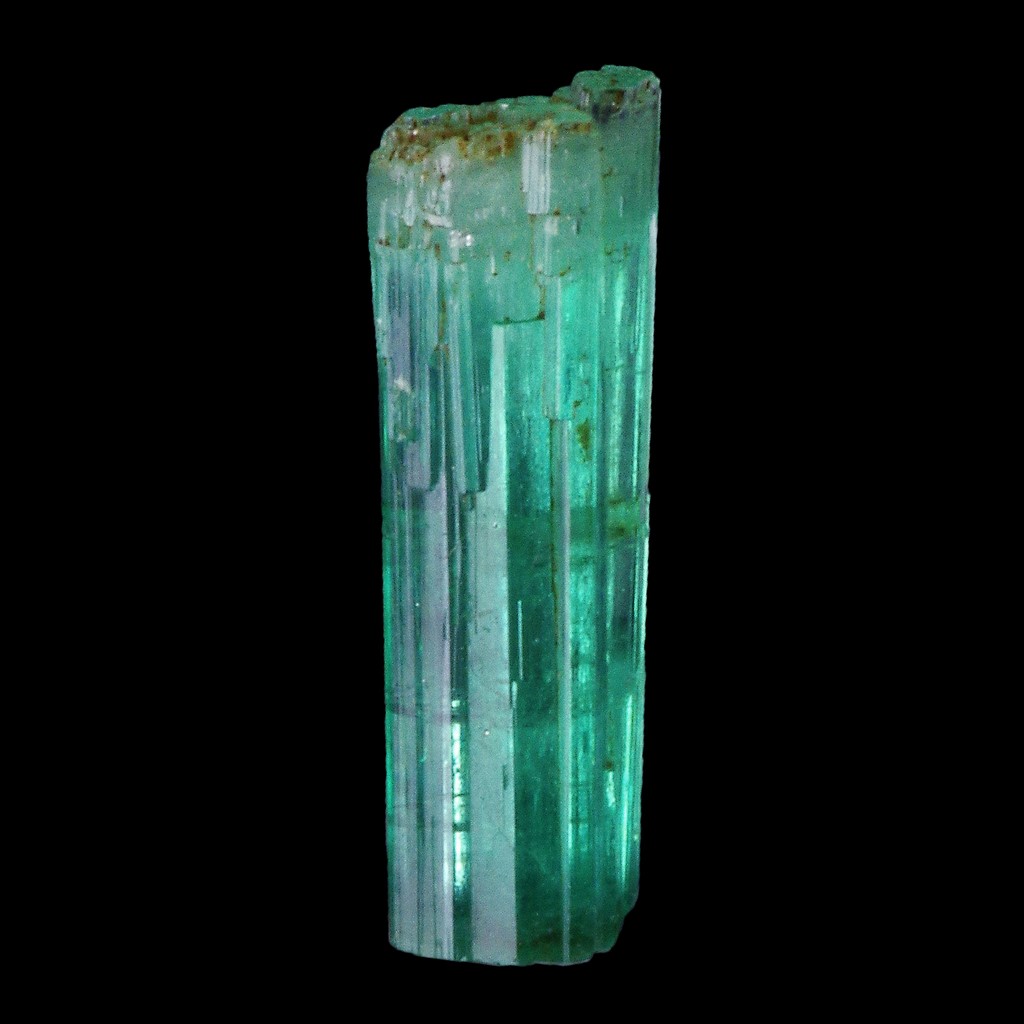 Emerald in the World 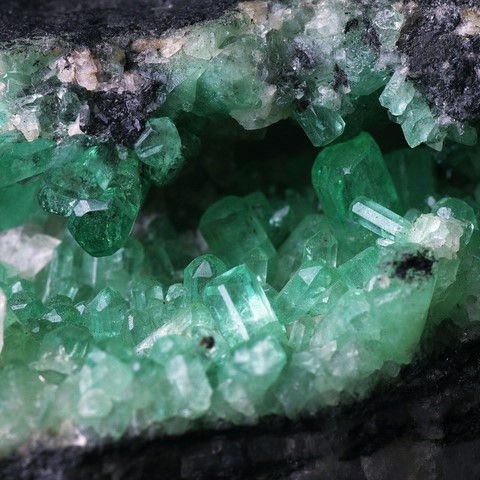 The finest crystals come from the Muzo area in Colombia. These deposits have been exploited since the sixteenth century, the emerald crystals (up to 8 cm) are present in calcite veins that run through bituminous limestone (picture on right). The second deposit of global interest is the Central Urals in Russia. Crystals are lower quality than the Colombians, but they can be much larger : about 40 cm ! Other good specimens come from Zimbabwe (crystals generally small in sizes), from Panjshir area, Afghanistan (main photo) and Brazil where green vanadium beryl are considered as emeralds since the 60's. Also note a deposit recently discovered in China, in Pingwu area in the  Sichuan Province.

In France emerald is not present, the sites that can sometimes encounter described in the ancient books are related to misidentification, note that the real emerald can be easily confused with other beryl varieties such as aquamarine that can take pale green hues.

There are no twinned emerald, just like beryl. Specimens called "trapiches" are varieties of crystals showing six rays growth characteristics. Each face of the hexagonal prism is extruded to form a wheel. These crystals are particularly sought by collectors and often very expensive. They are also shaped to integrate pieces of jewelry.

There are many treatments around the emerald. The most common and which concerns 95% of cut emeralds is fracture filling (data from the GIA). Very often fractured, the crystals are placed under vacuum, and the fracture planes are injected with oil or resin, sometimes dyed, in order to improve the transparency and color of the stones and to hide a fragility. This practice is carried out as well on gemstones as on rough crystals. This is why it is not recommended to clean emeralds with an ultrasonic cleaner which would risk breaking the stone... With time, the fact of being worn and the light the oil turns yellow and escapes from fractures, which can completely ruin the appearance of the specimen. One only has to browse through jewelry stores to find that this treatment is hardly ever specified. It is however possible to remove the oil by means of alcohol or acetone, but also to retreat the stone. This treatment is carried out on almost all gemstones whose fractures reach the surface. When the oil or resin is dyed, there is an abnormal concentration of color in the fractures. It sometimes happens that the injected liquids are UV fluorescent or that an abnormal reflection of light is observed on the injected fracture planes : the "flash effect".

In 1848, French chemist Jacques Joseph Ebelman was the first to use the flux process to synthesize emerald crystals. It was not until 1938, however, that the first marketable synthetic emeralds were produced by this means.

American Carroll Chatham began experimenting with crystal growth when he was still in high school. He grew his first synthetic emerald crystals in 1935 and began marketing them three years later.

Since the late 1930's, there have been several producers of flux-synthesized emeralds. Today, Chatham Created Gems, Kyocera International and an unknown number of Russian companies cultivate synthetic gems by this process. Each business has its own techniques, but the steps are generally the same. They add elements that make up the emerald (beryllium, aluminum, silicon, chromium and oxygen) to a flux in a gold or platinum crucible. Emerald crystals form at temperatures between 650°C and 800°C.

The growth time depends on the desired crystal size. It may take 10 months to grow a 200.00 ct crystal. In 1953, Carroll Chatham donated a 1,014.00 ct crystal cluster to the Smithsonian Institution in Washington. It took two years to develop it ; such groups of hexagonal prisms can join the path of collection minerals without the mention "synthetic" appearing, like the specimens shown in the photos opposite. The color, size and internal characteristics of synthetic emeralds vary from producer to producer. According to producers, the marketable yield of faceted stones is approximately 15% of the rough produced.

Although inclusions are characteristic (crystals of gold or platinum, wispy veils inclusions), it is sometimes very difficult for the untrained eye to differentiate a natural emerald from an emerald synthesized by flux. 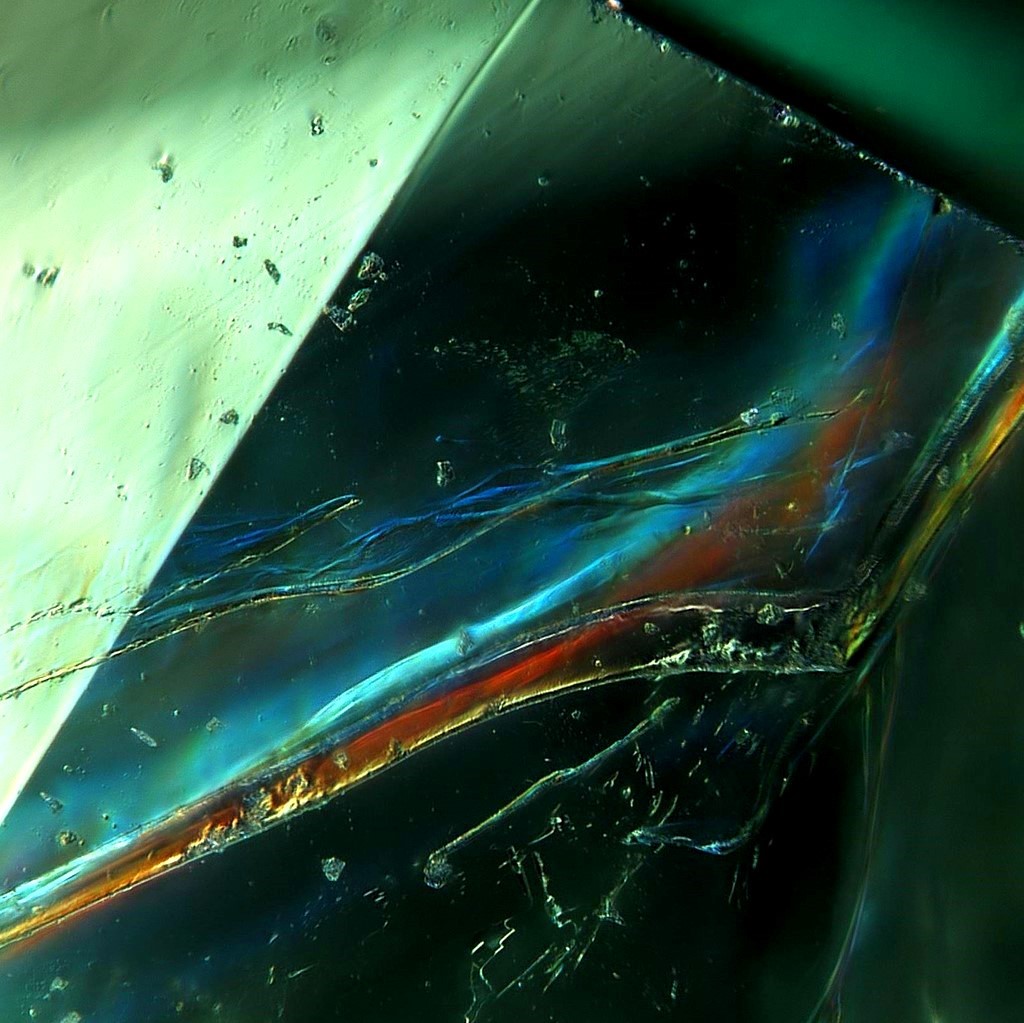 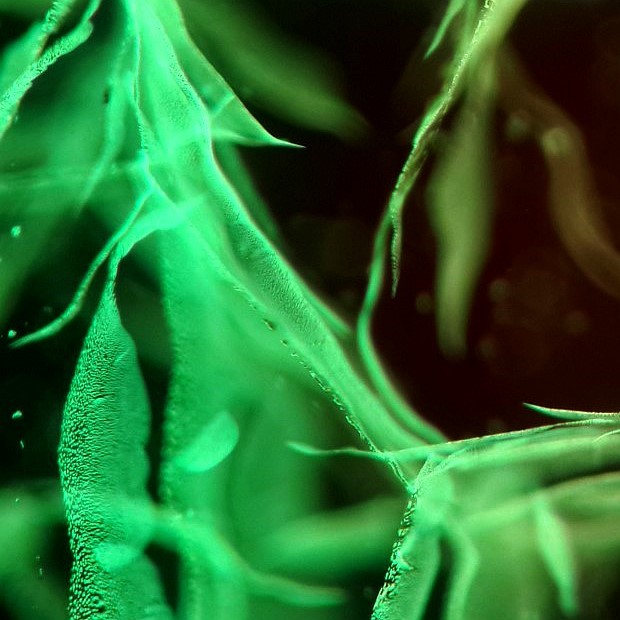 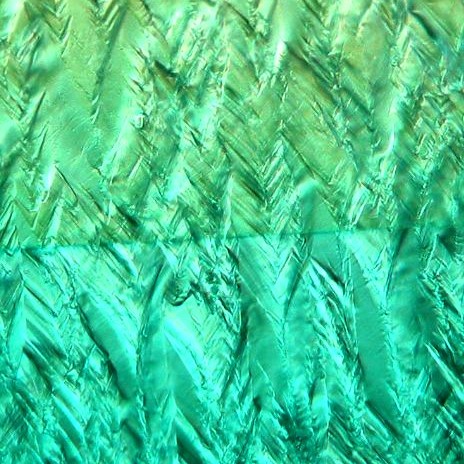 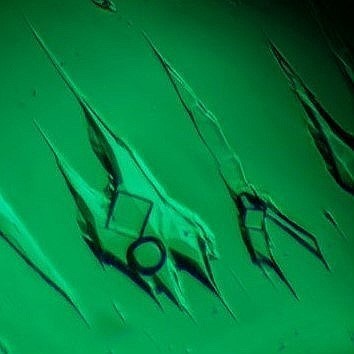 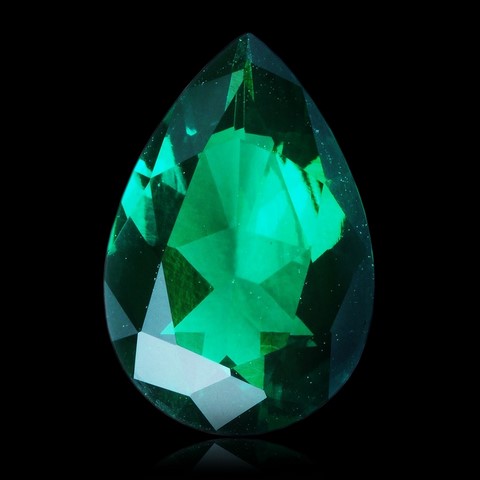 It was in 1960 that Johann Lechleitner synthesized emerald hydrothermally for the first time. He deposited a layer of emerald (no more than 0.5 mm thick) on a grain of beryl. In 1961 Linde, a division of Union Carbide, also began research into the production of hydrothermal emeralds. Its researchers produced excellent emerald crystals, but the process was expensive. However, they marketed cut emeralds in their Quintessa jewelry line from 1965 to 1975, but ceased production due to poor sales. In 1978, Vacuum Ventures took over the process from Linde and operated from its old factory. They marketed their product under the name "Regency Created Emeralds". Synthetic hydrothermal emeralds from what was then the Soviet Union first hit the market in the early 1980's. Records show, however, that they were first produced in 1965.

The production of hydrothermal synthetic emerald generally involves dissolving compounds of aluminum, beryl, silicon and chromium in an acidic water solution in an autoclave. Because the growing solution is highly corrosive, some producers line the inside of the autoclave with an inert metal like gold or platinum. Researchers found large amounts of nickel, iron, and copper in crystals from a producer who only lined their autoclaves with stainless steel... Specifics vary from producer to producer, but the autoclave is typically heated to temperatures between 500°C and 620°C and pressurized in the range of 700 to 1500 atmospheres. Synthetic emerald crystals grow on plates of colorless natural beryl grain which are suspended in the growth solution. Some growers cut fragments of synthetic emerald and use them as a seed for new growth.

The size of the crystals depends on the growth time. The growth rate of a grower is 0.2 mm to 0.3 mm per day. A 10.00 ct crystal can produce faceted stones ranging from 0.50 ct to 2.00 ct. Another grower grows crystals weighing 300 ct to 350 ct in about four weeks. When the crystals reach this weight, the producer cuts the crystals and ends up with two plates that weigh 120 ct to 150 ct each. This process produces about 18% salable material.

Although hydrothermal synthetic emeralds and natural emeralds may appear the same to the naked eye, microscopic examination reveals differences. We note in particular the chevron growth characteristic of this synthesis process, visible only under magnification. Hydrothermal emeralds are usually very little included, and looking for growth chevrons should become a habit.

Finally, it should be noted that the sale of materials such as glasses or plastics in imitation of cut or rough emerald is commonplace... The search for natural inclusions (two-phase or three-phase, needles tremolite or actinote, pyrite, calcite or mica) makes the difference.