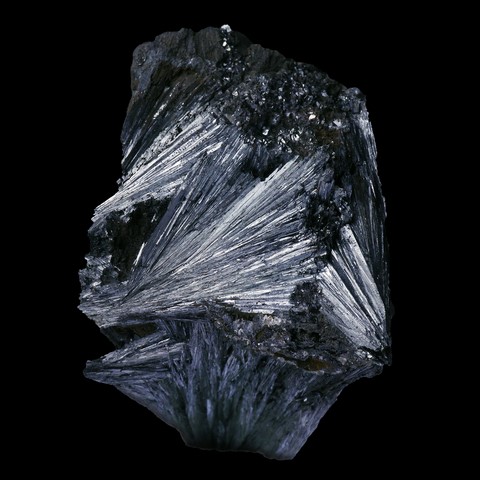 Pyrolusite is the most common manganese mineral. It is also the most stable manganese oxide under surface conditions, which explains why it appears in pseudomorph of other manganese minerals, in particular manganite, and that it is very frequent in outcrops of deposits of manganese. Its name comes from the Greek pyros (fire) and lusis (dissolution), because this mineral called glass soap is used to clean yellow, brown or green tints left by iron in glass. It is sometimes a primary mineral but most often secondary to manganiferous deposits. Fragile, pyrolusite has a perfect cleavage according to (110), a metallic luster and a steel gray to gray-black color. Its crystals are rare, prismatic, elongated along [001] or pseudocubic with striated faces : under this crystallized habit, pyrolusite is still sometimes called polianite. However, pyrolusite is mainly known in pseudomorph after manganite, in fibrous masses, in kidney-shaped nodules with fibroradiated textures, in earthy masses staining the fingers, or even in dendritic aggregates appearing in trees (dendrites). Pyrolusite is also abundant in polymetallic nodules of the deep ocean floors. It is the main ore of manganese, a metal mainly used as an alloy with iron for the manufacture of ferromanganese, necessary for the production of steel (about 6.5 kg of manganese are used to produce 1 ton of steel). Manganese is also used in various alloys based on copper, zinc, aluminum, tin, lead. In chemistry, pyrolusite is used as an oxidant in the industrial manufacture of chlorine, bromine and oxygen. Manganese salts benefit from a wide range of applications : industrial water disinfectant (potassium permanganate), desiccator in paints, coloring in brickworks and pottery, and bleach in glassmaking. Pyrolusite dendrites on limestones or in agates are commonly cut for jewelry and for ornamentation. 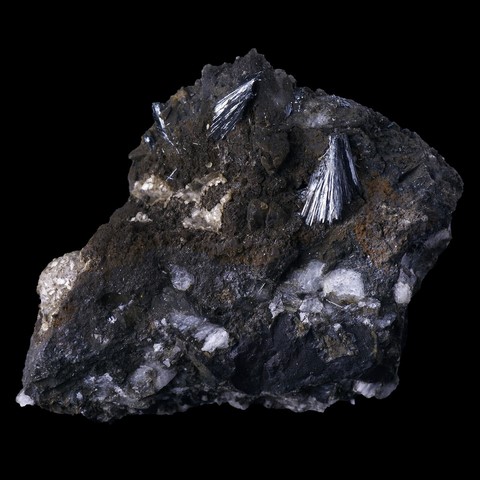 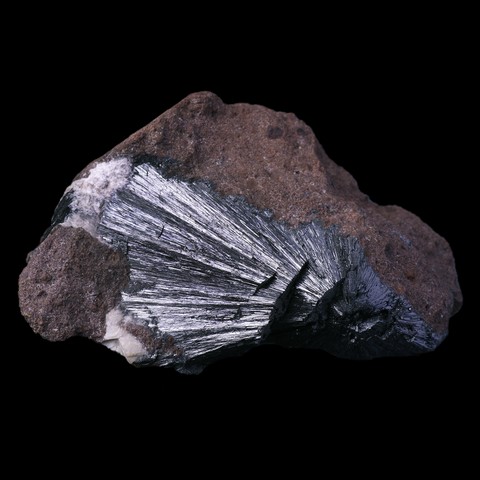 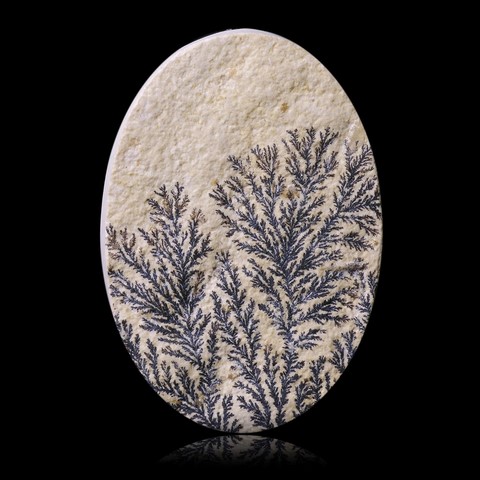 Pyrolusite in the World

The most beautiful pyrolusite formations are decimetric crystals in pseudomorph after manganite from Thuringia (Germany), Ilfeld, Oehrenstock, Gremmelsbach... Similar pseudomorph, in sheaves of geodic crystals and in spectacular fibroradiated aggregates are also known in the USA (Jackson, Michigan). The best occurrence of crystallized pyrolusite (very clear crystals up to 2 cm) is the Platten deposit (Horni Blatna) in Czech Bohemia. Very fine radial aggregates of 4 cm also come from the district of Kuruman (South Africa).

In France, the most beautiful crystallizations come from Alban-le-Fraysse and the Rivet quarry in Peyrebrune (Tarn). It is found in micro-crystals in Saphoz (Haute-Saône), Kaymar (Aveyron), Chessy (Rhône), Argentolle (Saône-et-Loire), and on many other occurrences. Pyrolusite dendrites are almost ubisque in limestones and in granite fractures.

No fake recorded for this mineral.