Orpiment is an arsenic sulphide, a little rarer than realgar, the deposits of which it commonly shares. It is found in low temperature hydrothermal deposits, mainly epithermal deposits, directly dependent on recent volcanism, as well as in fumarole deposits. In addition to realgar, it is commonly associated with pyrite, cinnabar, and stibnite. Its name is derived from the Latin aurum (gold) and pigmentum (pigment), alluding to its color and the disappointed hope that this mineral contains gold. Transparent to translucent, the orpiment possesses a perfect laminated cleavage according to {001}, a resinous luster and a lemon yellow to yellow-orange color, passing to brownish in the large crystals. It has a persistent and characteristic smell of sulfur. The orpiment generally occurs in foliaceous, fibrous or columnar aggregates (up to 35 cm in section) with flabelliform fracture, and commonly in short prismatic crystals, with shiny {010} faces and vertically striated, sometimes deformed. Orpiment is the ultimate transformation product of arsenic sulphides, so it is stable in outcrops ; however, it tends to tarnish and form powdery clumps. It is also the product of alteration of the realgar by light. It is the second arsenic ore after arsenopyrite. It is also a pigment used by painters and was in vogue as a hair removal product until its toxic nature was revealed. It has been used as an ornamental stone since the 2015's, and very widely carved, cut and polished in Indonesia. This "new" material is sold under the trade name "bumblebee jasper" or "eclipse stone". 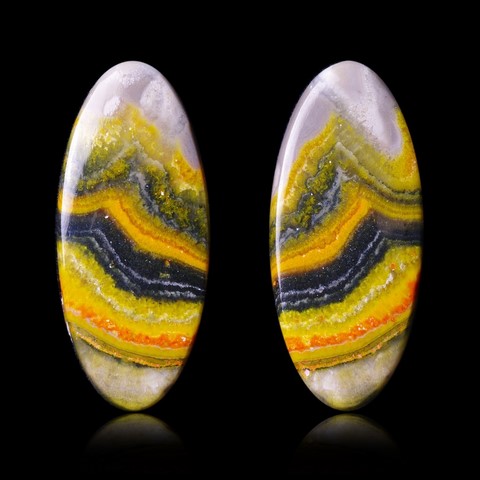 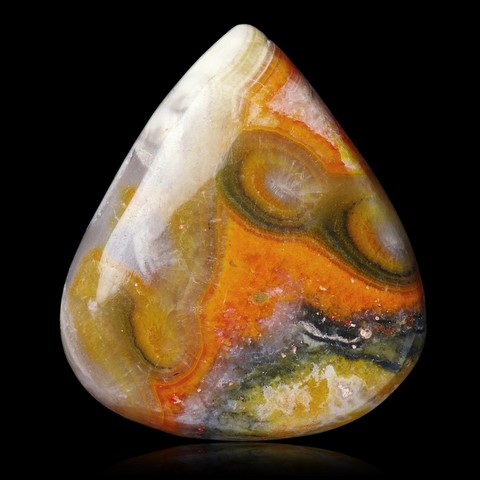 Orpiment in the World

Many deposits have yielded crystals of orpiment. The best specimens have recently appeared in abundance in the Shimen area, Hunan, China. They appear in sheaves of divergent prismatic crystals, yellow-orange in color and with gemmy quality up to 5 cm, associated with calcite scalenohedra. Quiruvilca (Peru) produced magnificent orange crystals of 5 cm and fibroradiated aggregates of millimeter crystals, while another Peruvian deposit, Huallapon, gives very fine specimens of 3 cm. 4 cm elongated crystals were extracted from the Mercur Mine (Utah). Since the mid-2010's, Indonesia has been using orpiment extensively for sculpture and ornamentation, blocks weighing several tens of kilograms are thus extracted and polished into millions of carats of cabochons.

In France, we find orpiment on the burning slag areas of Ricamarie (Loire) where it is associated with realgar. Orpiment is also responsible for the yellow color of forcherite, an opal that was once encountered in St-Nectaire (Puy-de-Dôme), the locality being now exhausted. It is also present in Corsica in Matra, associated with the realgar, as well as in Duranus (Alpes-Maritimes) always associated with the realgar. The deposit of Lucéram (Alpes-Maritimes) provided beautiful crystals of 3 cm encompassed by calcite.