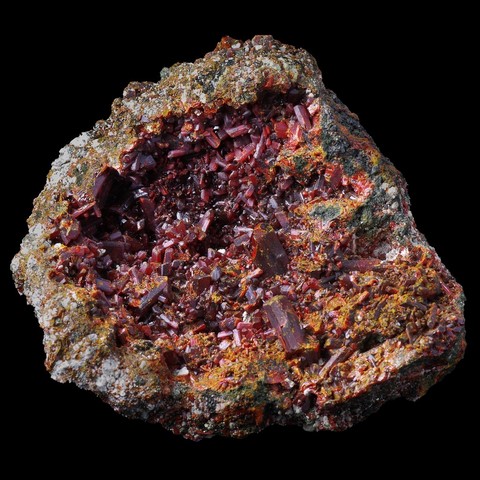 Realgar is with orpiment the most common arsenic sulphide. It is found in low temperature hydrothermal deposits, mainly in epithermal deposits, directly linked to recent volcanism, and in certain fumarolic deposits. In these deposits, this mineral is generally associated with orpiment, cinnabar or stibnite. Its name comes from the Arabic Rhaj al Ghar (mine powder), recalling the fact that it often appears as fine dust resulting from the decomposition of arsenic minerals, lead or antimony veins. Realgar has an adamantine to resinous luster, it is transparent to translucent, yellow-orange to red-orange in color. This mineral is sectile and exhibits perfect cleavage according to {010}. It is also highly photosensitive : the crystals crack under the light and turn into yellow powder consisting of arsenolite and orpiment. Its conservation in collection therefore requires total darkness. Realgar forms prismatic to acicular crystals, streaked according to [001], grainy masses, sometimes concreted crusts or even droplets (fumarole deposits). It is a mineral sought after by collectors because of its vivid color. Its instability prohibits any use as ornamental stone or gemstone. It was once an important ore of arsenic, today arsenic is mainly recovered from arsenopyrite. It is used mixed with saltpeter in pyrotechnics to give a powerfully luminous white, in glassmaking, in tannery. In the Middle Ages, it had a role of pigment and medicine. 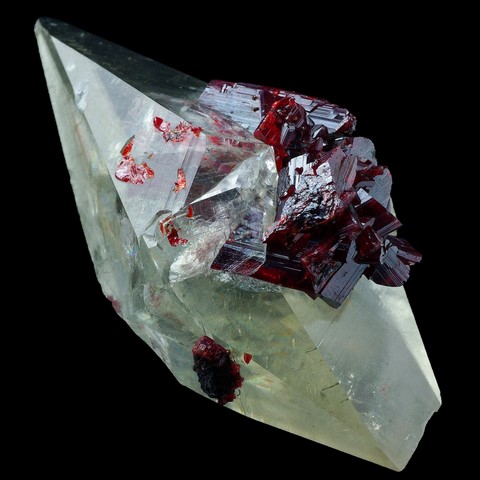 Réalgar on calcite from Shimen Mine, Changde, Hunan, China 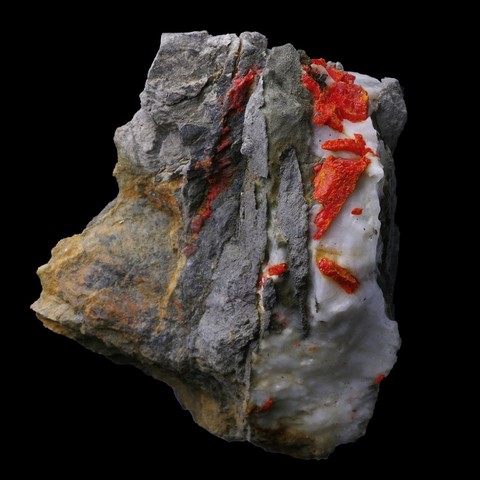 Drops of realgar from the burning slag of Ricamarie, Loire, France

Realgar in the World

The best specimens in the world were discovered at the end of the 90's in the region of Shimen (Hunan, China), where they form prismatic gemmy crystals up to 10 cm, associated with calcite scalenohedra. Magnificent 5 cm crystals also come from the Green George River deposit (Washington) and others, smaller, from the Getchell mine (Nevada). In Romania, numerous epithermal auriferous deposits, including Sacarimb (formerly Nagyag) and Cavnic, have yielded spectacular crystals of up to 3 cm. The Swiss deposit of Binn also provides crystals, usually millimetric but exceptionally measuring 6 cm, implanted on white dolomite. Finally, the Peruvian mine of Quiruvilca provided 3 cm crystals sometimes implanted on orpiment and barite ; while the Palomo mine, still in Peru, produced crystals up to 4 cm on quartz with galena and sphalerite.

In France, we find the realgar on the burning slag areas of Ricamarie (Loire) where it is associated with orpiment. It is also present in Corsica in Matra, also associated with the orpiment, as well as in Duranus (Alpes-Maritimes) where it has given some beautiful crystals.