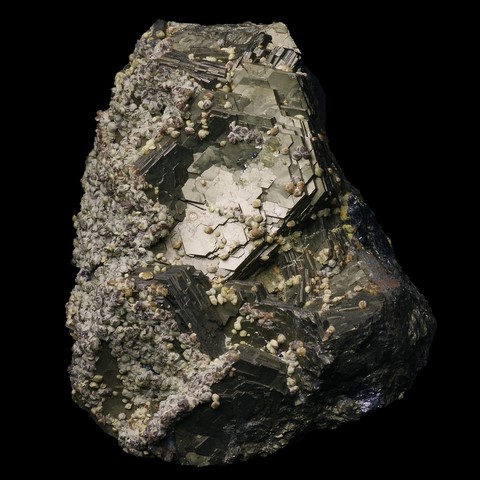 Pyrrhotite is an hydrothermal mineral common to metal deposits formed at high temperatures. It is a mineral that owes its name to the Greek purrotes (reddish) in reference to its color. Pyrrhotite occurs mainly in skarns (associated with magnetite, wollastonite, sphalerite, chalcopyrite, scheelite, grossular, etc...), in deposits related to basic and ultra-basic rocks (with chalcopyrite, pentlandite, linneite, millerite, platinoids, etc...) and in some sulfidic masses. It is an unstable sulphide under surface conditions and is often a pyrite-marcasite pseudomorh. Pyrrhotite has a metallic luster and a yellow-bronze color with a red or pinkish iridescence, which is frequently expressed by exposure to the air. It occurs in cleavable to granular masses or tabular pseudohexagonal crystals sometimes arranged in rosettes. It is one of the rare magnetic minerals, attractable to the magnet, the intensity of magnetism being inversely proportional to the iron concentration. Pyrrhotite is rare in aesthetic crystallization which makes it a sought-after mineral for collectors, it is also a mineral mainly extracted for the copper, nickel and occasionally platinum minerals it hosts. Pyrrhotite contains only exceptionally enough nickel to form an ore. It was very locally a source of sulfur (Ontario, Canada).

Pyrrhotite in the World

In France crystals of 5 cm were extracted from the Brittany mine of Pontpéan (Ille-et-Vilaine), crystals completely transformed into limonite (up to 4 cm) were also reported to the Combe de la Selle in Isère department.

The {1012} twinning is common for pyrrhotite. It is found in the Goldschmidt figure 3b below for crystals from Elizabethtown, Ontario, Canada. Figures 3c and 3d are presented this same twinning but on synthetic crystals this time. Figure 3a shows a single crystal from the Aeolian Islands (Italy). 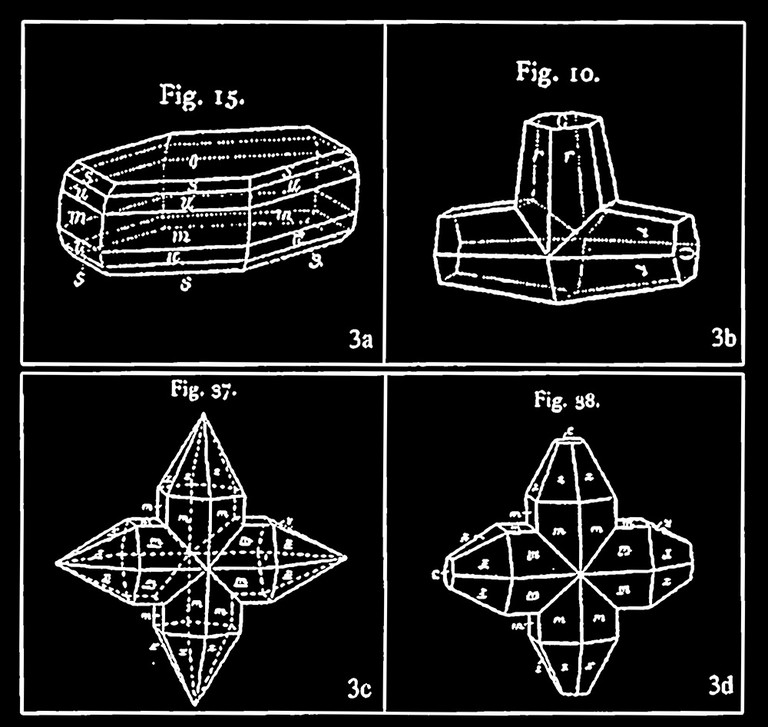 A new twinning has been report forward in the collections of the National Museum of Natural History of Luxembourg in January 2009 on a specimen of Santa Eulalia, Mexico. This is a reflection twinning on the {1013} plan. See the article in Le Règne Minéral n ° 90, 47-49. J. Scovil's photo.

No fake known for this species.