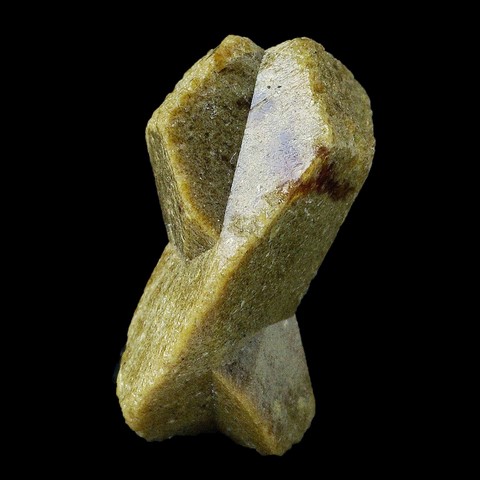 Monazite is a primary phosphate of granites and especially of their pegmatites (where crystals exceeding 100 kg have been discovered), also present in nepheline syenites and carbonatites, as well as in certain high temperature vein deposits (vein at Sn, W, Mo). It is also abundant in the charnockitic complexes of old shields as well as in placers and paleoplacers. Its name comes from the Greek monazein (to be alone), highlighting the rarity of crystals isolated in defining samples. In monazite, with the ideal formula CePO4, cerium is frequently replaced by lanthanum or neodymium, which has led to the individualization of three minerals according to the dominant rare earth : monazite-(Ce), monazite-(Nd) and monazite-(La). In addition to these common replacements, other rare earths elements can enter the crystal lattice, as well as radioactive elements such as thorium or uranium, making monazite frequently metamicte. Monazite-(Ce) is translucent, resinous to adamantine luster, and variable in color : reddish brown to brown or in different shades of yellow, sometimes greenish or gray-yellow. It occurs as crystals elongated along {001} and flattened over {100}, with frequently rough, curved or striated faces. Monazite crystals are commonly "gutter twinned". It is a mineral that is exploited as a rare earth ore, and was in a still recent past the main ore of thorium : this element can be present there up to 32% of ThO2, with 4% of U3O8 (variety "cheralite "derived from charnockites and concentrated in the placers of the Travancore coasts, India). Monazite is mainly exploited in important placers (Florida, Georgia, India...), where it is associated with zircon and ilmenite, and in alkaline complexes (Mountain Pass, California and Bayan Obo, China). In geology, it is a mineral which because of its thorium content is used in geochrology (dating). Finally, it is occasionally cut for jewelry.

Monazite in the World 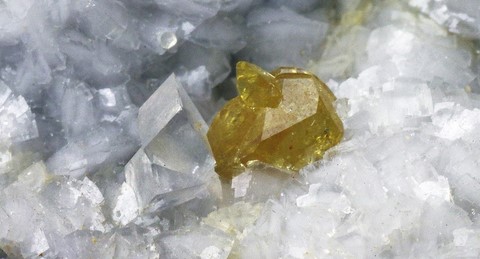 In France, monazite is found in St-Christophe-en-Oisans (Isère) in transparent gemmy crystals in alpine clefts. It is also common in the heavy sands of Plouguerneau (Finistère), as well as in the Ordovician "zirconia sandstones" of the Armorican Massif, which are ancient beach sands. Pretty millimetric gemmy crystals are also present on the dolomites of the Talc Mine in Trimouns, Ariège (photo on the right).

Several twins are known for monazite, the most common is on {100}, often cruciform (main photo). A second also exists on {001}, it is lamellar and rare.